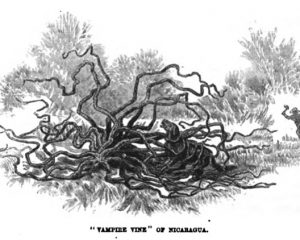 Readers of Gothic literature will quickly recognize that Irene is suffering from a vampire bite. She is not the victim of Dracula, Carmilla, or Lord Ruthven, though. Rather, it is a vampiric sumach tree that has attacked her during her sleep. Ulric Daubeny’s “The Sumach,” published in his collection The Elemental: Tales of the Supernormal and the Inexplicable (1919), is a fascinating killer-plant story. It tells of a tree that has grown from a stake plunged into the heart of a buried vampire. The tree possesses hypnotic powers that seduce young women to its branches to feed upon them.