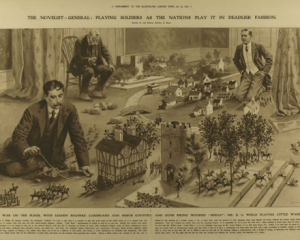 The first edition of H. G. Wells’s 1911 publication Floor Games, a manual for a worldbuilding game for children, opens with a declaration: [On a floor] may be made an infinitude of imaginative games, not only keeping boys and girls happy for days together, but building up a framework of spacious and inspiring ideas in them for after life. The British Empire will gain new strength from nursery floors.[1] The concept that child’s play could alter the child’s future —

END_OF_DOCUMENT_TOKEN_TO_BE_REPLACED 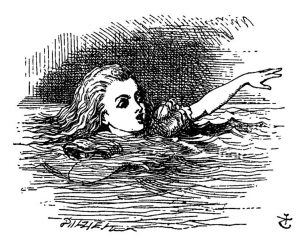 Unlike many other examples of “Golden Age” nineteenth-century children’s literature that promoted morality through allegorical form, Lewis Carroll’s Alice’s Adventures in Wonderland (1865) was without a clear instructional purpose. In this post, I consider two images by Sir John Tenniel (1865) and Salvador Dalí (1969) in order to reinterpret Wonderland’s possibilities through femininity and madness. In the Victorian period, ‘madness’ was a gendered construct associated with ideas of the feminine, such as hysteria.[1] Although Alice is represented as a child

END_OF_DOCUMENT_TOKEN_TO_BE_REPLACED

Rohan McWilliam A Tale of Two Cities is at the Kings Head, Islington, from 25 September-19 October 2013.  The script has been published by Samuel French. To the King’s Head pub theatre in Islington for a real curio: the premiere of a dramatisation of Dickens’s A Tale of Two Cities by, of all people, Terence Rattigan and John Gielgud.  This version, written in 1935, has never been performed by professional actors on stage so its arrival at the Kings Head

END_OF_DOCUMENT_TOKEN_TO_BE_REPLACED

As part of JVC‘s ongoing commitment to exploring the continually evolving intersections Victorian culture with contemporary literature, arts, and popular culture, we have convened a virtual roundtable discussion on Paul St George’s Telectroscope. This roundtable is also being simultaneously published in the print edition of JVC 17.4 : http://www.tandfonline.com/toc/rjvc20/17/4. From May until June of 2008, New York City and London were visually connected in real time via the Telectroscope’s tubes and tunnels, to the amazement and delight of residents and