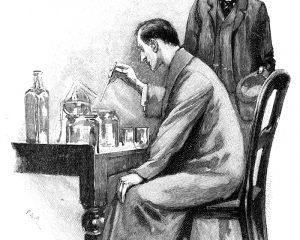 Sherlock Holmes is not often associated with the supernatural, having “confined [his] investigations to this world” when Dr. Mortimer presented Sherlock with his most overtly supernatural case, in The Hound of the Baskervilles. Sherlock was logical, factual, and believed that human nature and the natural world, not the paranormal, could explain anything unexplainable. Despite this, Sherlock’s origins have closer ties to the supernatural than it might first appear. Sherlock’s creator, Arthur Conan Doyle, was a known spiritualist and a dedicated