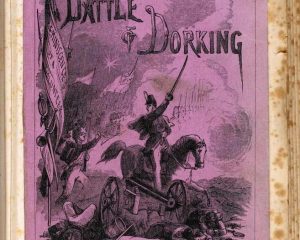 The unnamed narrator of Lieutenant-Colonel George Chesney’s invasion scare story, The Battle of Dorking: Reminiscences of a Volunteer (1871), is a complex character. His war-experience, recounted to his grandchildren in 1921 before they emigrate to a ‘new home in a more prosperous land’,[1] contains several details which should elicit readers’ sympathy – or, at the very least, pity. After he volunteers to defend Britain from German-speaking invaders, the protagonist experiences several distressing ordeals in 1871. At the titular battle, he

END_OF_DOCUMENT_TOKEN_TO_BE_REPLACED

With all of this summer heat, who wants to leave the house!? In this #blogpost by
@Sarahebb_ she writes about what the Angel in the House figure looked like OUTSIDE of the home in Victorian advertisements. Read the full post here: https://jvc.oup.com/2021/01/21/picturing-the-angel-outside-the-home/.