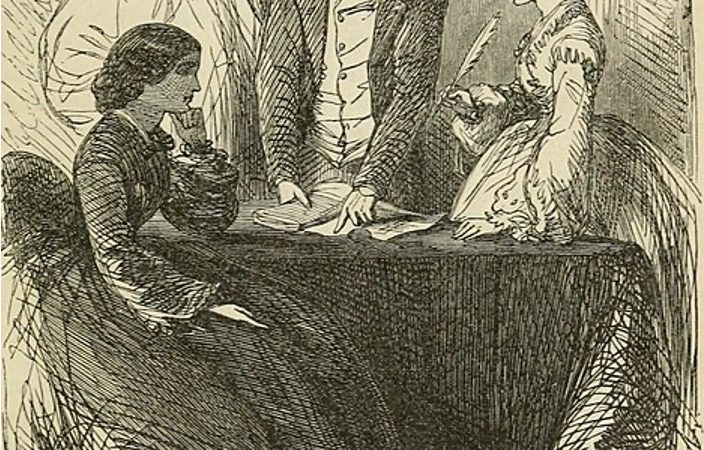 Marian Halcombe is a complex woman. Unlike many other female characters, both within and outside Victorian fiction, she stands outside the gender binary. She is often attributed male characteristics, both in mind and appearance. Her appearance is complex, juxtaposing her feminine and sexualized body with her masculine and ‘ugly’ face:

The lady is dark. […] The lady is young. […] The lady is ugly! Never has the old conventional maxim, that Nature cannot err, more flatly contradicted – never was the fair promise of a lovely figure more strangely and startlingly belied by the face and head that crowned it. [1]

The only reason she seems to be deemed as ugly by Walter Hartright is due to her “large, firm, masculine mouth and jaw” and “dark down on her upper lip [that] was almost a mustache.”[2] She cannot be categorised as a beautiful woman due to her masculine features. This gives her a freedom unavailable to her sister because of her appearance: freedom from the sexualising male gaze. However, it should be noted that this freedom does not become available to her until Walter sees her face; before that his eyes ravage her body.

While many hail Marian as a progressive and groundbreaking female character, much of this is undermined by the inherent biases and hegemonic beliefs of some academics. Toril Moi, in her criticism of how the image of female characters in literature are analysed, underlines the biases that create lacking and limiting analyses, as well as damaging interpretations of the female character within fiction. Each critic and reader “speak[s] from a specific position shaped by cultural, social, political and personal factors,” and so it is “difficult to believe that we can ever fully be aware of our own perspective,” thus all interpretations of characters and events are coloured by our own biases and lived experiences.[3]

What I took great issue with while researching The Woman in White was the inherent belief that, at the end of the novel, Marian had been ‘feminized,’ and the consequent implications of this.[4] To these critics, not only does Count Fosco possess an oppressive gaze, but a feminizing one, as his gaze upon her journal is enough to reduce her to a more feminine disposition. I disagree with this, as it reduces Marian to a set of binaries rather than acknowledging the fluid composition of gender aspects that she truly possesses. As claimed by Susan Balée, Marian “begins to display more classically feminine characteristics.”[5] She attributes this to the “mutual sexual attraction to Count Fosco,” and that he “literally makes a woman of her” by invading her privacy and reading her personal journal.[6] Balée does not go into much detail as to what these ‘feminine’ characteristics are, other than Marian showing some of her emotions through crying and her experiencing sexual feelings towards Count Fosco. However, as stated by Lyn Pykett, having “[a]ctive and autonomous sexual feeling[s] […] denotes masculinity, or a deviant ‘improper’ femininity,” thus invalidating this aspect of Balée’s argument.[7] Due to her embodiment of both male and female attributes, she veers so far from the norm that she cannot be categorized – she “cannot be reduced to either term of a phallic binarism.”[8] Marian stands outside the binary definition of gender, and should thus be exempted from this discussion. However, women achieve their ‘value’ through their comparison to the male ‘ideal,’ and sadly, Marian is unable to escape the burgeoning pressure from society to be defined and categorised within the hegemonic structure.[9]

To some extent, it seems acceptable for women to embody male attributes, yet the reversal of this seems abominable in the context of the Victorian novel. This is best exemplified in Fredrick Fairlie, Laura’s uncle. Throughout the novel, he is described as having a “frail, languidly-fretful, over-refined look,” often emphasising the more feminine aspects of his person.[10] His appearance is so off-putting to Walter, with it being “something singularly and unpleasantly delicate in its association with a man, and at the same time, something which could by no possibility have looked natural and appropriate if it had been transferred to the personal appearance of a woman.”[11] Walter tips his hand here a bit. While Mr. Fairlie’s appearance and behaviour seems abhorrent to Walter regardless of gender, he still feels the need to emphasise this.

While I do agree that we see a shift in Marian’s character as the novel progresses, the focus seems to be misplaced. Whether or not this is true is, in fact, irrelevant. What I wish to discuss is not how or why, if at all, Marian has become more feminine, but the inherent negative connotations of this claim. Why is there a need to categorize Marian within the gender binarism, and what is the foundation for this interpretation? Balée only uses vague examples that seem to reinforce a misogynistic interpretation of femininity, namely that of emotion. Crying and the display of emotion are often regarded as feminine behaviour and thus bear negative connotations. Balée’s use of examples thus simply furthers the argument that feminine attributes are negative, rather than either positive or neutral, reenforcing the hegemonic structure of gender roles, inadvertently giving more value to male attributes. It seems as though Marian only has academic value because she is not stereotypically feminine. While she is a female character, her real value stems from her male attributes, not her female.

The focus on Marian being feminized by Count Fosco’s gaze undermines her character development and defines her based on the gaze of a man. While Count Fosco does exact control through his gaze and surveillance, especially regarding his wife, he does not seem to have the same effect on Marian. It implies not only that Count Fosco has the ability to enforce gender norms upon Marian, but that this is believable as well as acceptable behaviour – and through this line of analysis we end up repeating this pattern.

Therese Ruud Gordeladze recently finished her master’s degree in English literature at the University of Oslo. Her thesis centred on “the gaze” and its implications for female identity within Victorian fiction. Her main interests of study are feminist and gender theory in a post-structuralist framework and how those combine to explore gender norms and dynamics in Victorian literature.

Header image: 1873 illustration from Wilkie Collins’s The Woman in White.