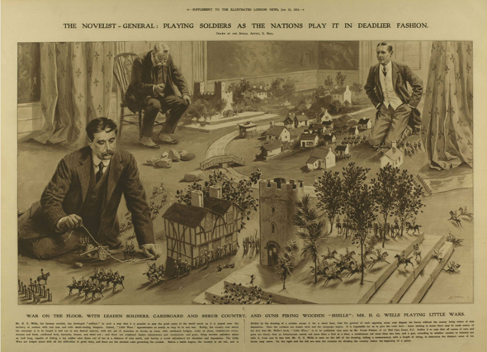 The first edition of H. G. Wells’s 1911 publication Floor Games, a manual for a worldbuilding game for children, opens with a declaration:

[On a floor] may be made an infinitude of imaginative games, not only keeping boys and girls happy for days together, but building up a framework of spacious and inspiring ideas in them for after life. The British Empire will gain new strength from nursery floors.[1]

The concept that child’s play could alter the child’s future — even the future of the country itself — is grounded in a distinctively late nineteenth-century fixation with the child and their educational, moral and physical development. The enormously popular ‘Child Study’ movement emerged in the United States and Britain towards the end of the nineteenth-century, combining an interest in the interior lives of children with novel concepts of evolutionary psychology to centre play as paramount not only to the health of the child, but to the future health of society.[2] Wells’s fellow socialist, children’s author Edith Nesbit, also saw the potential in children’s games as an alternative educational tool and a way of shaping the future. Nesbit wrote her own game manual, Wings and the Child; Or, The Building of Magic Cities (1913), proposing the building of a ‘Magic City’: a miniature city built on a table from everyday objects. Nesbit’s biographer, Julia Briggs, has also pointed to the resemblances between the two publications, but that a major falling out around 1908 ‘had been far too bitter for Edith to acknowledge that she owed Wells any sort of debt’.[3] Wells and Nesbit, had, for a time, been good friends and comrades in the Fabian Society — a democratic socialist group who believed in reformist and gradualist policies to enact social change — until Wells was forced to leave due to his attempts to radicalise the group and overthrow its leadership. While in general concept Wells and Nesbit’s games are alike, as Nesbit’s biographer has pointed out, it is in their subtler ideological departures that differences can be identified, and Nesbit’s Magic City can be read as a critical revision of Floor Games.

The fundamental concepts of both games critique capitalism. Aside from character toys (soldiers, animals, civilians, etc.), railway track and other miscellaneous toys such as tin ships, the main component of Wells’s game is wooden bricks which, he writes, should be designed and made specially for the purpose by a carpenter. Wells vehemently disparages shop-bought bricks as ‘skimpy, sickly, ridiculous pseudo-boxes of bricklets’ and toyshops as ‘the merciless mercenary enemies of youth and happiness’.[4] The toys of toyshops are pointedly not what children want or need; they serve the avaricious grasping of the capitalist and the ignorance of the unimaginative parent. Nesbit’s description of shop-bought toys is almost identical: ‘a vast mass and litter and jumble of incredible futilities—things made to sell, things made by people who have forgotten what it is like to be a child’.[5] Yet her rejection of the commodification of play goes one step further than Wells: the Magic City is to be constructed entirely out of everyday, household objects. Not only does the use of household items theoretically make her game accessible to all classes, it also fits with the anti-capitalist ethos of ‘simple living, high thinking’ popular among fin de siècle socialists. Nesbit explains that ‘The fewer toys a child has the more he will value them […] If his choice of objects be limited, he will use his imagination and ingenuity in making the objects available serve the purposes of such plays as he has in hand’.[6]

Imagination — the creation of something out of nothing — as well as being essential to play, can also be seen as essential to socialist belief. Marxist philosopher Ernst Bloch’s The Principle of Hope (1954), recovered utopian dreaming from being considered naively optimistic to an essential part of the process of getting to utopia.[i] Nesbit’s work sees that the child who is well-practiced at imaginative play and can easily visualise the transformative power of the objects of ‘ordinary life’ is also the child who is able to re-conceptualise that ordinary life for a better one.[7] Through her Magic City game, Nesbit teaches the child to disregard ascribed meaning (here, the purpose of objects), so that they are in a position to imagine an alternative to a seemingly fixed social system. The imaginative child is the natural socialist, able to conceive that the value of objects is not innate (commodity fetishism in Marxist thought) but transmutable.

On a fundamental level too, Nesbit’s game has a distinctly Fabian emphasis on improving environmental conditions. The very premise of the game encourages the child to keep making amendments and improvements. The game foregrounds the process of building itself, rather than a capitalist, entrepreneurial emphasis on the end product. Nesbit suggests that the game is never really finished, but encourages the child to imagine that the city is real, to ‘imagine how splendid it would be if you were small enough to walk through the arches of your city gates, to run along the little corridors of your city palaces’ or ‘if your city became big enough for you to run about in while still keeping your natural size’.[8] A distinctive difference between the Magic City and Floor Games is that Nesbit’s game contains no character toys at all. The playing child is positioned as the ‘architect’ and ‘the builder new to his business’ and Nesbit describes the player in these terms to construct the game as imitating serious (adult) work.[9] Through the complex intermingling of reality and fantasy fostered by Nesbit throughout her children’s books, the child, able to imagine that the Magic City is real and they an architect, can also imagine the possibility of improving environmental conditions in real-life too.

Contrasted with Nesbit’s child-architect, Wells’s player is constructed as an omniscient worldbuilder, controlling character toys rather than imagining him- or herself as an inhabitant. For the game itself, Wells proposes imperial exploration, in which ‘We land and alter things, and build and rearrange, and hoist paper flags on pins, and subjugate populations, and confer all the blessings of civilization upon these lands’ or city building.[10] In these scenarios, the player acts either as a commander of an imperial army or town mayor. At one point, Wells calls himself ‘British Consul-General in Toyland’.[11] Wells’s emphasis is on a masculine, colonial kind of making — the maintenance of order, both in battle strategy and colonial governance and administration — than creation.

Wells wrote prolifically on education and many of his critiques were focused on fears that it was producing weak, submissive subjects, incapable of properly running an empire. In Floor Games, Wells proposes the nursery as an alternative educational space. Holly Nielsen situates Wells’s Floor Games within a long tradition of children’s games which ‘fit into the corpus of material that aimed to instil in British children a sense of superiority and nationalism while preparing future members of the ruling classes for imperial careers’.[12] As Nielsen suggests, these games can be read alongside the popular nineteenth-century genre of ‘Boys’ Own’ fiction, adventure-romances in which a patriotic masculine hero sets forth on an imperial mission to civilise a savage world. Wells’s game intends to guide children into a role of authority and masculine agency, to create a strengthened future generation.

The imperial romance genre, like the game itself, is inherently utopian, exploring what could be through play. Wells’s A Modern Utopia (1905) shows how, for Wells, imperial expansion can be both reformist and utopian. A Modern Utopia envisions a ‘worldwide synthesis of all cultures and politics and races into one World State as the desirable end upon which all civilising efforts converge’ as the solution to the redistribution of wealth and world peace.[13] Using Marxist ideas (that also inform Bloch’s concept of the utopian process), Wells further describes how his ‘not static but kinetic’ utopia will be maintained through a Darwinist struggle for survival in which ‘individual enterprise will be continually experimenting, either to fail and pass, or succeed and at last become incorporated with the undying organism of the World State’.[14] As with Nesbit’s Magic City, the process of perpetual re-building and improvement is fundamental to both games’ methodology. It shows how both authors could envision childish play as containing utopian possibilities, as a method to train the child in future urban (or global) planning and utopian thinking.

The positioning of the player in Floor Games as the worldbuilder mirrors the hierarchical structure of A Modern Utopia, which features a class of ‘samurai’: ‘voluntary noblemen’ who perform all leadership and administrative roles in society, and are the only ones who can vote.[15] The samurai are, notably, twice described as child-like in their clarity of vision.[16] Both games envision the child’s unique and redemptive ability to imagine and play as containing utopian socialist possibilities. While Floor Games exhibits a competitive, hierarchical model of masculinity, in which colonial expansion is the means to a more socialist end, Nesbit offers an inclusive, communitarian alternative within the structure of the game itself. As Bloch notes, “More than one daydream before now has, with sufficient vigour and experience, remodelled reality”.[17]

Sophie Thompson (@thesugarb0wl) is a CHASE-funded PhD researcher in Victorian literature and culture at the University of Kent. Her thesis examines the representation of childhood in British socialist writings of the late nineteenth and early twentieth century and how this intersects with emerging social and scientific concerns about the environment. She is also an editor for Romance, Revolution and Reform, an open-access journal for nineteenth century research.