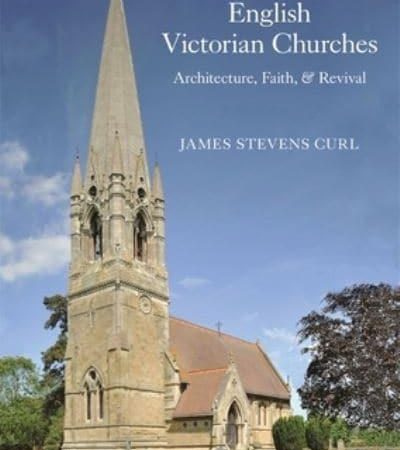 English Victorian Churches: Architecture, Faith & Revival (John Hudson Publishing) by the eminent architectural historian James Stevens Curl is a book that can be read in more than one way and appeal to more than one kind of audience.

It can be read as a work of scholarship; one that spans two distinct but related disciplines, namely Victorian church architecture and nineteenth-century ecclesiology. As an authoritative survey and critique of the finest examples of nineteenth-century English church building, it would be difficult to better. In addition to this, it is a reasonably accessible introduction to the now arcane history of the impassioned inter- and intra-denominational liturgical conflicts that raged through much of the nineteenth century.

It has perhaps a potentially wider appeal as a handbook of reference – a delightfully and copiously illustrated ‘companion’ to accompany the travels of those who love to savour England’s architectural delights. That happy breed of Englishman and woman for whom ‘tourism’ means exploring its towns and villages rather than heading for its airport departure lounges; the kind who would likely have National Trust membership and perhaps a Pevsner in their pocket. (And not forgetting their Scots, Welsh and Irish compatriots, along with Anglophiles from around the world arriving by trains, planes and automobiles.)

One feels an intuitive confidence in the erudition underpinning Curl’s assessments of architectural merit. All the most familiar names are represented; Giles Gilbert Scott, G. E. Street, William Butterfield, Alfred Waterhouse etc together with less familiar ones like J. F. Bentley, J. L. Pearson and G. F. Bodley & Thomas Garner. The Gothic Revival, in all its stages, is undoubtedly the big story of Victorian church architecture and much of the text is devoted to it, but Curl is careful not to allow other architectural styles to be eclipsed in his narrative. Whilst acknowledging the major importance of Pugin and Ruskin to the ‘renaissance’ of Gothic, he notes the inevitable fallibility of these revered pop-historical icons: “both men it has to be said were bigots: Pugin was anti-Protestant; Ruskin anti-‘papist’ […] both omitting anything inconvenient to their causes”. The pedantry and passion of nineteenth-century architectural/liturgical disputation can seem almost incomprehensible to the post mid twentieth-century mind – albeit somehow eerily redolent of our own twenty-first-century century secular ‘religions’ of political correctness.

The book can be read and enjoyed simply as a kind of grand tour of Victorian church architecture, but much that it has to offer will be missed if there is no engagement with this other dimension of its scholarship: the ecclesiastical passions and divisions threading through nineteenth-century English history. It is this that takes the book beyond one of purely architectural historical interest.

It is an assured (if sometimes a little overtaxing) dissection of the anatomy of these nineteenth-century ecclesiological passions and how they were variously expressed in architectural fabric. The ultimate goal, of course, was always to “win souls in the spiritual deserts of teeming British cities”. For anyone who has stood in one of these Houses of God feeling faintly self-reproachful at one’s inability to transcend the “Oh, isn’t this marvellous” and really imbibe a sense of the liturgical spirit embodied in the fabric, then a prior reading of the chapters focussing on these matters would be greatly enriching, particularly so for those legions of historic-church-loving unbelievers.

A central theme of the book is that Victorian church building was born of a perceived evangelical imperative to re-invigorate Christian faith in the face of industrialisation’s threat to the moral souls of its new urban masses. To read of the fervour and sheer ambition of this church-building project (numbering 1500 by 1861) occurring in parallel with industrialisation, can feel counter-intuitive to an overly simplistic conception of the history of Christian worship; one in which near-universal pre-modern church attendance inexorably falls away in the wake of advancing urban mass society. Given this, I found myself wanting to know: how successful (or otherwise) was this project in its outcome? Some evidence of how the urban masses reacted to the missionary zeal, whether via reference to contemporary social/historical or literary/fictional sources would, for me, have enriched this aspect of the narrative.

As a leading authority on Classical and Gothic architectural traditions, it is perhaps unsurprising that Curl takes a dim view not just of architectural Modernism but of the intellectual fashions of modernity more generally; ideas he explored at length in his 2018 Making Dystopia. And hence it is that the book has an elegiac quality (as he himself notes in his Introduction). An elegy ripe with gentle lamentations on the “melancholy long withdrawing roar” [Matthew Arnold] of Christian faith in the face of modernity’s supposed freedom from ritual; from metaphysical myth and mystery. He laments too the doomed “reaching out” of the Anglican Church itself; its “mystery and numinousness […] discarded in favour of fatuous virtue signalling”. However that may be, with its infectious enthusiasm for the buildings themselves, English Victorian Churches still reads much more celebration than otherwise.

Graham Cunningham (@mrgcunningham) is an occasional contributor to many cultural magazines including The Critic, City Journal and Spectator Australia.