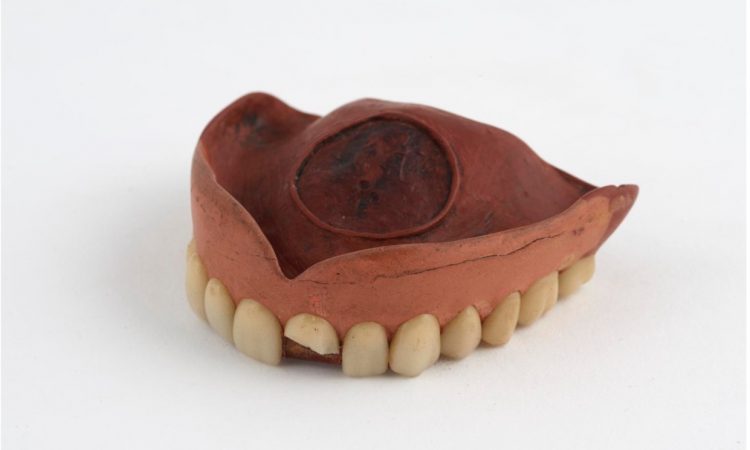 In the mid-nineteenth century, the show of teeth in ordinary life began to mean something new. While many edentulous – or toothless – Victorians experienced shame due to widespread tooth loss, with the increasing proliferation of dentists and dental treatments came the lessened desire to conceal broken teeth behind handkerchiefs and fans. Arguably more than ever before, an emerging dental industry encouraged people to happily bare their teeth in public. With the creation of mass-market false teeth, made from a new cheaply-produced vulcanite rubber from the 1840s, large and visible teeth demanded to be seen and discussed, and became culturally relevant sensory organs being observed and recorded in new ways. Indeed, Victorian authors revived a new site for bodily synecdoche through the teeth in their fiction, and as the scholars Herbert Sussman and Gerhard Joseph have importantly claimed, these ‘prosthetic extensions of the organic body, whether seamlessly sutured to that body or not, became a figure for discussions of subjectivity and human identity’ (Sussman and Joseph 618).

Artificial teeth have long been determined as minor articles within critical nineteenth-century discourse, said to have been little discussed in Victorian fiction. The social historian John Woodforde, for instance, remarked in 1968 that ‘one might read a whole library of Victorian novels without learning that anyone’s teeth were artificial’ (Woodforde 3). Yet with certainty, we can now admit that this assertion was hastily informed. In the works of William Makepeace Thackeray, the Victorian denture is unabashedly exposed to the reader, since at Thackeray’s core ‘he was a Victorian, living in an age which put the greatest value on appearances, and he committed the unforgivable sin of showing what went on behind the immaculate façade’ (Monsarrat 20). The pretence of Victorian respectability was destabilised by Thackeray throughout his career, yet he also exposed bodily frailty and deception by publicising the denture as he did. As he determined in his Roundabout Papers, a collection of sketches published in the Cornhill Magazine between 1859-63,

‘You know, neighbour, there are not only false teeth in this world, but false tongues: and some make up a bust and an appearance of strength with padding, cotton, and what not?’ (Thackeray, Roundabout, 360)

Imaginatively united with Thackeray’s concerns about deception, he used the dental motif of false teeth to expose those with ‘false tongues’ and appearances in his fiction, while also diluting idealistic representation about nineteenth-century life.

In the novel The Virginians (1859), false teeth symbolically announce the seductive ruse of the Lady Maria. As Jack Rawlins maintains, through Maria’s use of the denture, ‘the memento mori rises up before us, and we are […] plagued with the image of her false teeth — we cannot help seeing the grinning skull the flesh only slightly disguises’ (Rawlins 213). Comparable to how human teeth expose the skeleton beneath the skin, Thackeray’s false teeth uncover unsavoury truths beneath lies, and the reader encounters Lady Maria as a suspicious liar who, in the guise of a marriageable girl, seduces her Virginian cousin Harry Warrington – the sole heir to the family’s American estate. Thackeray makes visible the bare bones of Maria’s desires through her teeth, since she wears her denture to conceal her tooth loss and masquerade as a young woman – and not as a spinster in her forties – to gain rank and fortune in America. As a commanding shapeshifter who ‘looked any age you liked’ (Thackeray 122), Maria can successfully elude recognition while wearing her teeth. Due to her use of dental camouflage, Thackeray compares Maria to a ‘syren slut’ (Thackeray 139) who falsely lures sailors to their deaths with song.

Like the siren’s drowned victims, Harry fails to look past the false front, and cannot identify Maria’s denture as a gauge of her true age – unaware that ‘if she eats him, as she proposes to do; [she] will crunch his bones with a new set of grinders just from the dentist’s […]’ (Thackeray, 140). This deception, however, is finally revealed to Harry by his aunt once he has already proposed marriage to Lady Maria. The traumatic effect of these false teeth on Harry’s psyche is recorded, and the blow is explicitly dental, since this trauma is compared to the pain of a dentist’s forceps.

‘Had a dentist been extracting Harry’s own grinders at that moment […]? Maria is forty-one years old, Maria has false—, horrible, horrible! Has she a false eye? Has she false hair? Has she a wooden leg? I envy not that boy’s dreams that night’ (Thackeray 159)

While Maria’s lies can no longer deceive Harry, Thackeray sustains the power of Maria’s false teeth since they ‘tore and lacerated’ Harry in his dreams (Thackeray 160) and are even flaunted by Maria as a symbol of her older age and lack of youthful innocence. When Harry’s aunt promises Maria five thousand pounds if she declines the engagement, she refuses and declares that ‘”we can afford to wait, aunt. At my age, as you say, I am not so eager as young chits for a husband’” (Thackeray 280). Retaining Harry indeterminately in her clutches, he is immobilised as the casualty of Maria’s deceitful teeth. In a final recognition of her disingenuity, Maria only releases Harry when she realises he will no longer inherit the Virginian estate, since his elder twin brother is revealed to have survived war. Thackeray further alludes to Maria’s continued toothy power when she finally marries an actor later in the narrative, and renders her new family poor by excessively eating and taking ‘the cream off the milk, and the wings of the chickens, and the best half of everything when there was only enough before’ (Thackeray 183). Continuing to powerfully want, Maria uses her teeth to eat more than the family can afford and compounds her aunt’s final belief that even ‘if you swore to your innocence till the rest of your teeth dropped out of your mouth […] I would not believe you!”’ (Thackeray 279). The dishonesty communicated through Maria’s teeth swells to become her entire narrative identity.

That Thackeray centralises false teeth as integral to the breakdown of Maria and Harry’s relationship attests to the greater narrative worth of the denture and its relevance to literature – which continues to be overlooked in Victorian scholarship.

Eleanor Chantelle Faulkner (@EC_Faulkner) is a fourth-year PhD student in the department of English and Drama, at Queen Mary University of London. Her doctoral thesis (‘Dental Imaginaries’) examines the depiction of teeth and the figure of the dentist in Victorian fiction. She is also a teaching associate at QMUL and a digital editor for the online journal Victorian Network. Her research interests include Victorian medicine and bodies, the nineteenth-century novel, and Charles Dickens.