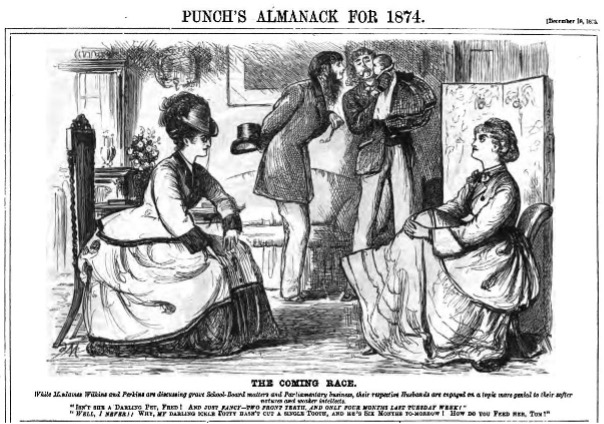 Ella Hepworth Dixon’s novel, The Story of a Modern Woman (1894), unlike many of its mid-century predecessors and fin-de-siècle contemporaries, does not burden its heroine, an aspiring professional woman, with marriage and biological motherhood.[1] Mary Erle, the main protagonist of Dixon’s novel, “did not care for babies” and “would rather have had a nice, new, fluffy kitten.”[2] Having thus described Mary’s lack of interest in children in no uncertain terms, Dixon’s narrative is also careful to point out her natural, feminine affection for a younger male sibling—“when they told her it was a little brother, of course that altered matters.”[3] Mary’s mother dies shortly after her brother Jimmie’s birth, bestowing upon her responsibility that gradually verges on the maternal. Ultimately, The Story of a Modern Woman charges the nineteen-year-old Mary with the exhausting responsibility of caring for her younger brother following the death of their father. In this way, Dixon’s novel offers a poignant depiction of what I term ‘de facto non-biological motherhood’.

Dixon’s novel initially depicts a robust bond between the orphaned Mary and Jimmie, as the former dreams of an artistic career and financial independence. Valerie Sanders argues that a sibling relationship in nineteenth-century fiction is an “unavoidable, lifelong […] tie, which persists through estrangement, death, or disguised identity, [and] constantly challenges definitions of the Victorian nuclear family in an unresolved interrogation of its shifting boundaries.”[4] For Mary, the first step towards her professional life is to relocate their sibling family unit to London— “‘Jim,’ said the girl suddenly, taking the boy by the arm, ‘there’s London! We’re going to make it listen to us, you and I.’”[5]  Early in the novel, Jimmie displays equal emotional investment in this familial bond. He professes his childlike intention to always live with his older sister and proclaims that “[n]othing shall separate them.”[6]

Mary, who struggles to launch an artistic career and eventually finds employment as a journalist in London, becomes the sole breadwinner of their household. As Jimmie gradually grows from cherubic boy to college student, his principal demands from his older sister transform from emotional to financial. Despite having escaped Ruskinian domestic femininity,[7] Mary’s professional life is encumbered by her de facto maternal duty toward her brother as his sole guardian. Jimmie “was to go to Oxford, as the father had wished. By living carefully this could be managed.”[8] Mary’s perpetual burden of supporting her brother’s life is vividly depicted in a scene where she opens her mail:

There was a small cheque from a newspaper; a little note—very affectionate—from Jimmie, requesting the loan of three pounds; and lastly, a bootmaker’s bill. Jimmie wanted three pounds, to be forwarded immediately. It was annoying—he was always asking for money, in little notes full of the most endearing epithets. Well, there was the present cheque. It was for three guineas—the price of one of her articles—so she could send him a post-office order.[9]

The novel periodically references meagre amounts of money earned and spent immediately to satisfy Jimmie’s demands and pay household bills. Mary, who never desired children, ironically finds herself bound to her sibling-ward, who consumes a majority of her mental and financial capacities as a professional woman.

There are multiple nineteenth-century literary examples of women who have biological children against their will in order to fulfil social expectations, such as Leonora in George Eliot’s Daniel Deronda (1876) and Hadria in Mona Caird’s The Daughters of Danaus (1894). Both Leonora and Hadria abandon their biological children to pursue artistic careers, but are compelled by patriarchal structures to return and carry out their maternal duties. Juxtaposing Hadria with the mythological figure of Medea, who kills her children as an act of revenge, Ann Heilmann argues that “[t]ransgressive women, Medea and Hadria are both castigated as bad mothers, Medea dramatically so, Hadria in that she abandons her sons for the sake of her career.”[10] But nineteenth-century narratives, such as Dixon’s novel, also depict undesired non-biological motherhoods that are adjacent to conventional biological maternity. Notably, these non-biological motherhoods are imposed on women as a consequence of their male relatives’ failure to provide for their families.

Undesired maternal duty is imposed on biologically childfree women by orphaned children of fathers, brothers, or cousins as filial duty they need to accept without agency and fulfil without question. This nonconsensual mode of mothering often renders these women monstrous mothers similar to unconventional biological mothers like Leonora or Hadria. Shifting focus away from this forced imposition of non-biological motherhoods, transatlantic nineteenth-century narratives frequently emphasise the monstrosity of non-maternal women by depicting them as unnaturally aged and dour. In Elizabeth Barrett Browning’s epic poem Aurora Leigh (1856), the orphaned eponymous protagonist’s “father’s sister” and de facto mother, has a “somewhat narrow forehead braided tight / As if for taming accidental thoughts / From possible pulses; brown hair pricked with grey / By frigid use of life, (she was not old, / Although my father’s elder by a year).”[11] Similarly, in Susan Coolidge’s children’s novel What Katy Did (1872), “Papa’s sister” Aunt Izzie, who comes to take care of the titular heroine, Katy Carr, and her siblings after their mother’s death, is “sharp-faced and thin, [and] rather old-looking.”[12] In Olive Schreiner’s feminist novel The Story of an African Farm (1883), Lyndall, the orphaned protagonist, pronounces Tant Sannie, her cousin Em’s stepmother and a remarkably monstrous maternal figure for both girls, “a miserable old woman.”[13]

In The Story of a Modern Woman, Mary Erle’s role as de facto non-biological mother begins early, before she can bear physical signs of monstrosity. Narratively, Mary perhaps avoids premature ageing by practicing the Victorian feminine acquiescence she recognises as “the whole fabric of civilisation.”[14] She quietly fulfils her imposed maternal duty at the cost of her own financial prospects as a professional woman. However, Dixon’s novel signals her possible descent into weary agedness, and, more alarmingly, prolonged impositions of maternal duty. As the novel draws to a close, readers learn that Jimmie “had done little more during his stay at Oxford than entangle himself with, and finally marry, a scout’s daughter.”[15] If the other married Victorian men in Mary’s life foreshadow anything—Mary’s father, Professor Erle, leaves her and Jimmie to fend for themselves after his sudden death, while Mary’s romantic interest, Vincent Hemming, wishes to abandon his wife and daughter to have an adulterous affair—it is that Jimmie, with no significant financial prospect to speak of despite his Oxford education, can potentially doom Mary to the life of a monstrous aunt.

Aurora Leigh’s and Katy Carr’s aunts are domestic women, devoting their bodies, and sometimes their lives, to their imposed motherhoods.[16] But Mary Erle’s character presents the intersection of imposed motherhood with fin-de-siècle female professionalism. The Story of a Modern Woman shows that feminine maternal affect continues to be taken for granted at the turn of the century and female autonomy to reject imposed motherhoods continues to be stymied, but professional women now have the capacity to offer both domestic and financial support as de facto non-biological mothers.

Riya Das (she/her) is Assistant Professor of English (British/World Literature) at Prairie View A&M University. She is currently working on her first book project, Women at Odds: Indifference, Antagonism, and Progress in Late Victorian Literature, funded by a full-time National Endowment for the Humanities grant. Her book will reassess female solidarity in the Victorian novel and demonstrate the role of strategic antagonism and indifference in fashioning female progress. Her work has appeared or is forthcoming in Texas Studies in Literature and Language, Nineteenth-Century Gender Studies, and Undisciplining the Victorian Classroom.

Figure 1. This image, captioned “MISS ELLA HEPWORTH DIXON. (From a photograph by Mrs. Fred. Wilkinson.)” appeared in the monthly magazine, The Idler, Vol. 6 No. 2, September 1894. The image can also be found in The Idler Magazine, Vol. VI, London, Chatto and Windus, 1895. https://play.google.com/books/reader?id=UJdEAQAAMAAJ&pg=GBS.RA2-PA206&printsec=frontcover p. 207.

[1] For example, Lyndall, the main protagonist of the early New Woman novel The Story of an African Farm (1883), by Olive Schreiner, vocally expresses her aversion to motherhood and ultimately dies in childbirth.

[7] In Sesame and Lilies (1865), John Ruskin asserts that the household is the primary domain for women, balancing the outside world that is governed by men.

[16] Izzie Carr in What Katy Did tragically dies from the exhaustion of caring for her brother’s boisterous children: “Aunt Izzie had died in the night! All their kind, penitent thoughts of her; their resolutions to please their plans for obeying her wishes and saving her trouble, were too late!” — Coolidge p. 225.