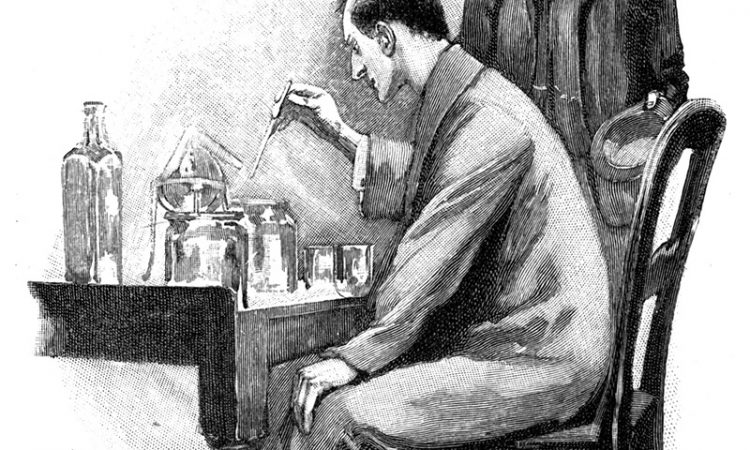 Sherlock Holmes is not often associated with the supernatural, having “confined [his] investigations to this world” when Dr. Mortimer presented Sherlock with his most overtly supernatural case, in The Hound of the Baskervilles. Sherlock was logical, factual, and believed that human nature and the natural world, not the paranormal, could explain anything unexplainable. Despite this, Sherlock’s origins have closer ties to the supernatural than it might first appear. Sherlock’s creator, Arthur Conan Doyle, was a known spiritualist and a dedicated believer in the paranormal. Doyle’s contributions to spiritualism were well documented; he had written many books on spiritualism himself, notably The History of Spiritualism (1926). It is in this book where the forgotten origins of Sherlock Holmes may be found.

Doyle was fascinated with mediums, having attended numerous séances throughout his life. Mediums were well-documented in The History of Spiritualism, and the mediums Doyle chose to include in his book range from the famous (The Fox Sisters) to lesser known mediums of the era. One of the more interesting cases Doyle documents in his book includes the mediums Mr. and Mrs. Holmes—who (allegedly) contacted the spirit of a deceased girl named Katie King in 1874 (Doyle, History 112-13). However, this case is brought up here not to argue for or against the validity of the Holmeses or mediums at large, but to bring attention to the name “Holmes”. The Holmeses were making headlines in 1874, over a decade before Doyle published the first Sherlock Holmes story, A Study in Scarlet, in 1887. Holmes was a common name in England during this time, and it has been argued that Doyle chose the name Holmes because of his fondness for the works of Oliver Wendell Holmes (Sims 114). However, it is interesting that Doyle would choose a name for his detective that is associated with Spiritualism and, moreover, with a possible case of fraud within the community. Although it is unknown exactly when Doyle became interested in Spiritualism, the earliest accounts of Doyle studying Spiritualism date back to 1881 when he was in Southsea, where “he read dozens of books about Spiritualism” (Simms 74). Despite Doyle’s early fascination with Spiritualism, it is difficult to know if Doyle was aware of the Holmeses when he began crafting the Sherlock stories.

The Holmeses made American headlines when one of the participants of the séance accused the Holmeses of fraud. This resulted in the accuser holding a “bogus” séance to disprove the original séance in question. However, Doyle records that “At the very hour that the bogus séance was being held at which Mrs. White was showing how Katie King was impersonated, the Holmeses had a real séance, attended by twenty people, at which the spirit appeared the same as ever. Colonel Olcott collected several affidavits from those who were present on this occasion, and there can be no doubt about the fact” (Doyle, History 115). Doyle then concludes that almost all of the points raised against the Holmeses by the accuser (Mrs. White) were successfully disproven in favour of the Holmeses with the exception of a photograph [fig. 2] that can be neither proven nor disproven as legitimate. While Doyle seems to believe in the validity of the Holmeses, he uses this case and the experiments of Olcott to support the importance of science and psychical research into the supernatural, because he believes it is through that research, the truth will be found (Doyle, History 115).

Doyle never outright states that the Holmeses were legitimate, but he certainly makes a case for their legitimacy in The History of Spiritualism, having investigated the case, and it is in that investigation that Doyle’s intention in choosing the name Holmes might be found. Doyle writes, “The author [referring to himself] has dwelt at some length upon this case, as it is very typical of the way in which the public has been misled over Spiritualism. The papers are full of the ‘exposure.’ It is investigated and is shown to be either quite false or very partially true. This is not reported, and the public is left with the original impression uncorrected” (History 116). Conan Doyle approaches this incident as a case needing to be solved. Doyle wants to believe in the legitimacy of the Holmeses, but he takes the fraud charges seriously and dives into the experiments done by Colonel Olcott (a psychical researcher) on the Holmeses to prove the case. Olcott performed a series of experiments with the Holmeses, usually with witnesses present, to support their mediumship. Doyle believes these experiments to have been legitimate acts of psychical research and places high value on the deductions drawn from Olcott’s research.

Doyle plays investigator with the Holmeses, using Olcott’s experiments as scientific support for his conclusions. He investigates, he deduces, and draws what he believes to be a logical and factual conclusion, writing “What are we to make of such a result as that? There were eleven witnesses besides Olcott. The facts seem to be beyond dispute. But what are we to deduce from such facts? […] It is a strange supposition, but it seems to meet the facts—which cannot be done by mere blank, unreasoning incredulity” (Doyle, History 117). These concluding sentences to the Holmeses’ case are similar to many assertions made by Conan Doyle’s fictional detective; the author and detective both believing that “the more you know from the less you find, the sooner even the greatest mysteries can be resolved” (Doyle, as quoted by McCuskey 72). This is demonstrated in “The Red-headed League”, with Holmes making a similar assertion to Watson, “You must come round to my view, for otherwise I shall keep on piling fact upon fact on you until your reason breaks down under them and acknowledges me to be right”, and originally in Doyle’s article “A Test Message” where he writes that the spiritualist should “cease inquiries once he finds evidence enough to convince his reason without being so overwhelming as to stagger and confuse it” (Doyle as quoted by McCuskey 72). Thus, Doyle might not have chosen the name Holmes to use for his detective because of the similarities the mediums themselves had to the detective, but because of the investigative process surrounding the case of these mediums. This was a fairly large-scale investigation: newspapers, researchers, skeptics, and spiritualists looked into the legitimacy of the Holmeses. This investigation and the experiments surrounding the Holmeses might have been what inspired Doyle to choose the name for his detective – a detective famous for looking at the facts and coming up with deductions to solve the case. After all, it was Sherlock Holmes who observed, “life is infinitely stranger than anything which the mind of man could invent” (Doyle, “A Case of Identity” 287).

Lorena MacMillan is a Ph.D. candidate at Anglia Ruskin University. Her researched is focused on the 19th century ghost story and its influence on Spiritualism as an interpretive community. She received both her BA and MA in English Literature from Aberystwyth University. Lorena also works full-time as a Curriculum Developer and Adjunct Faculty member for Marine Corps University’s College of Distance Education, and she works part-time as an Assistant Professor for the University of Maryland Global Campus.