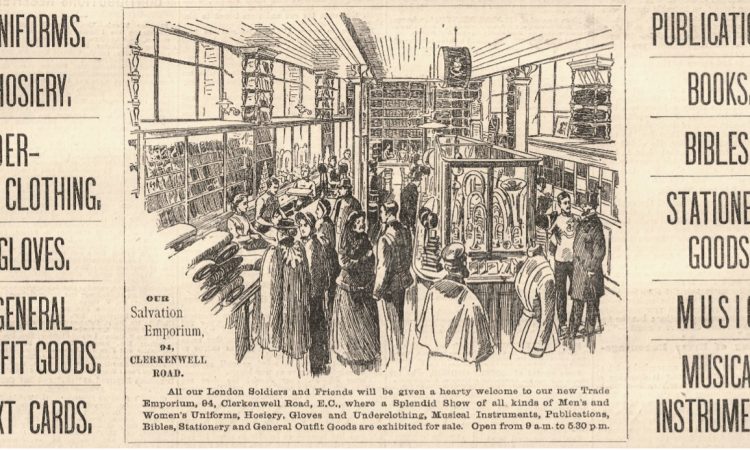 Figure 1 (header image): An advertisement for the wide range of goods to be purchased at the Salvation Army Trade Department, including an illustration of shoppers in the ‘Salvation Emporium’ showroom on Clerkenwell Road. From Salvation Army newspaper War Cry, 18 November 1893. Salvation Army International Heritage Centre.

The notion of a ‘consumer identity’ is simultaneously ubiquitous and elusive. We are all consumers; and many of us do our best, in one way or another, to ensure that our consumer choices are conscious ones, whether to serve ourselves, a wider ‘common good’, or both. For example, in the current cost of living crisis, we are likely to be extra alert to good value as we shop; but many may still opt for choices we see as ‘ethical’, such as fair trade, sustainable, organic, or local products. We may also engage in more or less organised forms of consumer activism. We can display our allegiance to certain consumerist causes through, for instance, visibly sporting ethical clothing brands, or we can participate in boycotts of brands and shops that violate environmental, labour, or animal welfare standards.

Our consumer habits can thus be viewed as both an expression of and a guide for our behaviour. We may think of ourselves as an ‘“active” or “citizen consumer” – a creative, confident and rational being articulating personal identity and serving the public interest’, a phenomenon that historian of consumption Frank Trentmann identified in his edited collection The Making of the Consumer (2006) as having emerged especially strongly since around 1980.[1] Ultimately, however, it can be very difficult to judge the actual impact of our individual consumer choices in a wider socio-economic context, making it easy to under- as well as to overestimate the good or harm we do. Meanwhile there are a large and varied range of interested parties that seek to influence consumer behaviour, whether purely for profit motives or to achieve a particular social good. In a chapter exploring ‘The Politics of Everyday Life’ in his edited Oxford Handbook of the History of Consumption (2012) Trentmann explains the long history of influencing behaviour through consumption. He notes:

That habits could be changed through consumption had been an intellectual leitmotiv since the Enlightenment if not earlier. From the late seventeenth century, writers noted how new tastes and goods stimulated industrious habits, and discussed the influence of comfort and convenience on social disposition and cultural refinement.[2]

With the increasing relevance of disposable income and purchasing power, these ideas were fruitfully developed in the nineteenth century by diverse groups and organisations. My article ‘“Buy Cheap, Buy Dear!”’: Selling Consumer Activism in the Salvation Army c. 1885–1905’ explores how ideas about purchasing power and consumer identity were harnessed by the Salvation Army. The then still relatively new organisation (it had been founded as the East London Christian Mission in 1865) actively encouraged its supporters to engage in specific consumer behaviours. This ‘targeting hearts and pockets’, as Jill Rappoport puts it, was designed to contribute directly to funding the Salvation Army’s ambitious initiatives for social and religious improvement. [3]

Today, the Salvation Army is still both a church and a charity. Christian religious motivations underpin its engagement with social issues such as homelessness and unemployment, but there is no obligation to subscribe to its religion to work for these branches of the organisation or to support its social work through donation. While the organisation today also holds government contracts in different countries for social work in specific sectors, including supporting victims of modern slavery in the UK, support from membership as well as other individual donors and volunteers still forms an important base to allow it to carry out its widespread activities. From its foundation up to about 1890, when the publication of In Darkest England and the Way Out announced a change of strategy by appealing directly to a more economically and socially prominent demographic, however, the Salvation Army drew most of its support, both in terms of membership and material donations, from lower-middle and (upper-)working-class communities. Contemporary Salvation Army sources also emphasise the support they received from the more deprived communities in which they worked, stating that many of these supporters gave as generously as they could. Over the next decades, the Salvation Army developed a range of ingenious ways of generating income by influencing the economic choices of this supporter base. My article explores several of these, from the highly successful – the Trade Department (see Figs. 1 and 3), which grew into a veritable department store and which survives today as Salvationist Publishing and Supplies – to the failed experiments (the Lights in Darkest England Match Factory).

I have deliberately characterised these disparate initiatives to influence consumer behaviour as ‘consumer activism’ in my article. The term is one that has been repeatedly redefined both by scholars and by other commentators, including by participants in consumer campaigns; the element of ‘activism’ attracts some and alienates others. I consider it an apt term in the context of the early Salvation Army, however, as part of the religious and social activism it practised. For members and supporters, directing their money towards these initiatives became an integral part of the visible, vocal, and practical support for the change the organisation represented and worked towards, alongside the uniforms, badges, buildings, and prominent public meetings and parades that put the Salvation Army so strongly in the public eye. Reframing these financial questions as something closer to activism, furthermore, allowed the organisation to square it with a religious narrative that abjured worldliness. Rappoport notes how:

Fearful that it would be accused of worldly corruption, the Army published its financial accounts and stern injunctions against receiving individual gifts. It also stressed the difference between the communal Christian ethic motivating Army requests and the self-interested worldliness it denounced.[4]

Curiously, however, one of the case studies Rappoport also highlights is the emphasis the Salvation Army placed on material expressions of self-help for the people in poverty that it had ‘saved’. Salvation Army membership required the relinquishing of so-called ‘vices’ such as drinking alcohol and smoking. The homes of the saved were supposed to reflect their virtuous lifestyle. By ceasing to spend money on alcohol and tobacco, it was assumed that Salvationists would not only have more to donate to the Salvation Army but would also be able to afford more and better household goods for themselves – which Rappoport pithily styles as ‘the chairs and cupboards of self-help’; see figures 4 and 5.[5] As I show in my article, these ‘chairs and cupboards’ were in turn produced and sold through the Salvation Army’s Trade Department. This made this kind of self-help its own form of activism, manifesting twice over in visible and material support for the Salvation Army. Those who were saved showed this in their changed consumer behaviour and, as prominent Salvation Army officer John Carleton argued in the War Cry, those who channelled this changed behaviour into buying from the Trade Department ‘know that the profit goes right into the Lord’s Treasury’.[6] In this way, then, getting saved and supporting the Salvation Army was framed as an act that benefited the individual as well as the greater good; much as, for many of us who practise ‘ethical consumerism’ today, the private knowledge and public acknowledgment of our conscious consumer choices often come with a sense of self-satisfaction too.

Flore Janssen (@FemLitCake) is Assistant Professor in Comparative Literature at Utrecht University in the Netherlands. She received her PhD from Birkbeck, University of London in 2018 and is currently completing a monograph on the Consumers’ League movements in the UK and the USA for Edinburgh University Press. Flore is also a qualified archivist and has previously worked at the Salvation Army International Heritage Centre (@SalvArmyArchive) as Digital Humanities Project Officer.