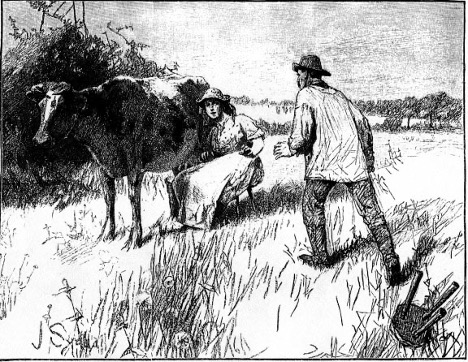 Header image: 1891 illustration from Thomas Hardy’s Tess of the d’Urbervilles, by Joseph Syddall.

“Why so often the coarse appropriates the finer thus,” comments the narrator of Tess of the d’Urbervilles following Tess Durbeyfield’s fateful encounter with Alec d’Urbervilles at the Chase.[1] The exploration of sexuality within Victorian culture and literature, especially female sexuality, is extensive; Michel Foucault’s first volume of The History of Sexuality (1976), Nancy Armstrong’s Desire and Domestic Fiction: A Political History of the Novel (1987), Christopher Parker’s Gender Roles and Sexuality in Victorian Literature (1995), and Lyn Pykett’s The ‘Improper’ Feminine: The Women’s Sensation Novel and the New Woman Writing (1992). The male gaze is something that is often intertwined with the discussion of female sexuality. Thomas Hardy’s divisive Tess of the d’Urbervilles (1891) presents a very real image of the threat women face in the form of the male gaze. Aptly put by James Kincaid: “[e]ach man kills the thing he loves – and he loves to do it. Tess becomes, thus, a titillating snuff movie we run in our own minds.”[2] In Tess, there are many different gazers. They are layered, some interacting with each other, while others exist further away from the core of the narrative.[3] This aspect is both interesting and important because it shows the permeation of the male gaze in narrative layers of literature, especially in Tess.

The notion of the gaze has been of particular interest to many academics examining female sexuality, and I believe the exploration of this topic has been somewhat limited as it does not fully take into account the readers of Tess’s tale. Researching this topic, especially how it is expressed in Tess, I realized that the gaze in the novel is not singular, nor is it placed on one narrative plane. Rather, what I discovered was that there was a plethora of sexualizing gazes, each tangled into the web of the true voyeur of the novel: the narrator. Just as Laura Mulvey used Sigmund Freud’s concept of scopophilia in order to explore the implications of the male gaze, I also make use of this term. While Mulvey used it as her “political weapon” to dismantle the misogynistic pleasure derived from cinema, I believe it is somewhat limiting, especially in regards to the female spectator (or reader); something both commented on by bell hooks and even Mulvey herself in a later article.[4] I would argue that the role of the reader of any novel is problematized by its narrator and its plot; consumers of literature are integral to the further development of the plot, yet, in cases such as Tess of the d’Urbervilles, they become unwilling participants in the objectification of women. This is further problematized by the female readers of this form of fiction, as their role of onlookers are conflicting with their own gender.

The narrator in Tess of the d’Urbervilles is not himself a part of the narrative; he is not a character in the novel, but stands safely outside the core narrative, fetishizing Tess without any real repercussions. Yet, he inserts himself into the narrative so often that he might seem like a character after all; his urge to stay close to Tess becomes almost pathological as he painstakingly focuses on her feature and appearance, even from a young age, noting “her bouncing handsome womanliness,” her “mobile peony mouth,” and her “flexuous and finely-drawn figure.”[5] The narrator’s scopophilic tendencies are unmistakable, and significantly impact the reading of the novel. In fact, as Freud notes, “[v]isual impressions remain the most frequent pathway along which libidinal excitation is aroused” and the narrator’s fixation on Tess enhances this.[6]

“Perhaps one reason why she seduces casual attention is that she never courts it.”[7] As Tess attempts to escape the continuous gazes put upon her by men, the narrator sums up her issue: her unwillingness to be looked at only makes her more desirable to men because they see it as a challenge, and the readers of her story become more fascinated by her character. As a woman, and as a fictional character, Tess is unable to escape being watched, because, as a character, her whole function is to be observed by the reader. As readers, we too are unable to escape the grip of the gaze of Tess’s narrator; and to further the plot, we have to not only accept this objectifying gaze, but we also have to physically enact it by reading the words themselves. The role of the reader is thus far more problematic than that of the spectator because the furthering of the plot cannot proceed without the reader, while the spectator is not integral to this process. Thus, the reader becomes an active participant, willing or otherwise, in the objectification of the female characters. The reader is coaxed by the narrator not only to partake in his sexual fantasies, but to bring them to life. The narrator alone is unable to further the plot, and by default his own fantasies; the readers become the instrument through which the narrator can objectify and violate Tess. What is worse, we consent, under the guise of curiosity.

In many ways this might not be as apparent to the male reader, as they are often used to enacting their gaze on women – however, there are always exceptions. What is fascinating is the relationship between the female reader and the female characters of novels that contain such overt sexualization. As Mulvey has argued, and been criticized for, men are the only ones who gaze, who sexualize. Not only does this argument perpetuate gender stereotypes, but it also erases the experiences of the female spectator and reader. Mulvey did, however, later address the role of the female spectator, stating that “the female spectator may find herself so out of key with the pleasure on offer […] that the spell of fascination is broken,” or “[s]he may find herself secretly, unconsciously almost, enjoying the freedom of action and control over the diegetic world that identification with a hero provides.”[8] Thus, women can only identify with the woman being objectified on screen or on the page, or with the male character doing the objectification.[9] This places the female reader in a predicament: either she allows herself to be objectified by proxy, or she performs the masochistic act of objectifying herself. The relationship between the female reader and female characters, such as Tess, is thus complicated by the narrator because of their conflicting interests. This is not only problematic in terms of perpetuating the objectification of women in media, but also because it causes them to experience misplaced identification, especially female readers, because it places them in limbo between being the oppressor and oppressed.

Through the novel’s structure, Tess is always bound by the narrator, as well as the reader, without whom she would cease to exist, which truly shows the unbreakable, yet problematic, link between consumers of fiction and its subject.

Therese Ruud Gordeladze recently finished her master’s degree in English literature at the University of Oslo. Her thesis centred on “the gaze” and its implications for female identity within Victorian fiction. Her main interests of study are feminist and gender theory in a post-structuralist framework and how those combine to explore gender norms and dynamics in Victorian literature.

[2] James Kincaid, “‘You did not come’: Absence, Death and Eroticism in Tess,” in Sex and Death in Victorian Literature, ed. Regina Barreca (London: Macmillan, 1990), 29.