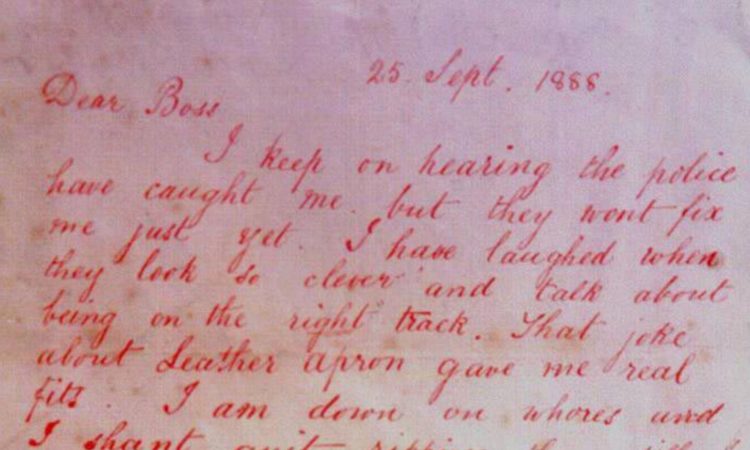 ‘Dear Boss, I keep on hearing the police have caught me but they wont fix me just yet. I have laughed when they look so clever and talk about being on the right track. That joke about Leather Apron gave me real fits. I am down on whores and I shant quit ripping them till I do get buckled.’ [1] [2]

Scribbled in red ink, these sentences marked the first of several letters attributed to the serial killer known as ‘Jack the Ripper’. This letter has fascinated amateur sleuths since the unknown hand first penned it. Indeed, just two days before the time of writing, Amelia Beltrao in The Sun reported on a new ‘scientific study [which] seemed to shed new light on the mystery, focusing on the ‘Dear Boss’ letter’.[3] This obsession with the Ripper’s correspondence is hardly unfounded, however. Throughout what has come to be known as ‘The Autumn of Terror’, and for years after, writers attempted to imitate the Ripper’s style.

This article is not concerned with analysing whether ‘the Ripper’ – whomever they were – wrote these letters or not. Nor is it interested in determining who the killer was. As Hallie Rubenhold states, ‘when we repeat the accepted Ripper legend […] we not only assist in perpetuating the injustices committed against Polly, Annie, Elizabeth, Kate, and Mary Jane but we also condone the basest forms of violence’.[4] This article does not seek to perpetuate injustices or condone violence. Instead, I argue that the Ripper letters are unique tools with which to negotiate locational identity. In particular, I examine several letters from the north of England to demonstrate how authors construct distinct regional identities. As Stewart P. Evans and Keith Skinner state in their collection of Ripper correspondence, ‘the letters […] may be used by an author as a significant building block’.[5] Northern authors use the Ripper letters as a significant building block to negotiate a distinct regional identity.

A fascinating example of a Ripper letter – regional or otherwise – originates in Bradford. It reads, somewhat more grammatically correctly than other Ripper letters, ‘Sir, – Would you permit me through the medium of your valuable paper to announce my arrival in Bradford. […] yours Etc. J. Ripper’.[6] Within the week, the Bradford Weekly Telegraph identified the letter’s author as a woman named – L. Perry Curtis Jr adds, ‘appropriately’[7] – Maria Coroner, a twenty-one-year-old ‘mantle hand’ from Oldham.[8] Coroner’s case is unusual because the police never identified most other Ripper letter forgers. The young woman said she wrote her letter as a ‘joke’. Bradford’s population did not derive humour from it, however. No matter Coroner’s intentions, her letter also contributes as a ‘building block’ in a broader process of regional identity negotiation. 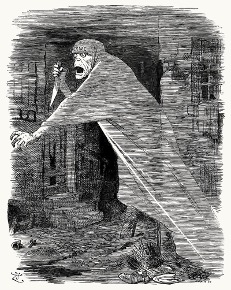 Looking at all of the regional Ripper letters, including Coroner’s, one is struck by how the Ripper is usually only visiting the north. This distancing is because, traditionally, the Ripper has been an (East) London phenomenon. As Amanda J. Field argues, ‘today’s film audiences could probably readily name a number of features they associate with Victorian London: these would undoubtedly include […] pickpockets – and Jack the Ripper. These features or signs constitute a widely accepted and recognised iconography of Victorian London, with each sign serving as a metonym for the city’.[9] The Ripper personifies Victorian London. Thus, when the killer moves northward, he is only visiting. The Ripper visiting places like Bradford affirms the northern cities as noteworthy sites of interest. Authors, however, never wholly incorporate the killer into the region, fearing the Ripper will become a metonym. Coroner uses the Ripper’s name in her letter to promote Bradford – albeit in an unconventional and much-disapproved way – as a location as culturally significant as London.

This process extends to smaller locations than Bradford, however. Another letter sent a year after the ‘Autumn of Terror’ states, ‘I thought I would Have a new House at the north […] I moved into Stockton last night from Kings Cross’.[10] Stockton likely refers to Stockton-on-Tees, a town in County Durham. Even today it has a population four times smaller than Bradford. Nevertheless, this unconfirmed writer uses the Ripper as a promotional building block for Stockton. They proceed to state, ‘I have 2 more [murders] in London & then it might be Stockton or Newcastle soon’.[11] In this writer’s view, Stockton is culturally equivalent to Newcastle and London. Writing this Ripper letter allows them to affirm a sense of identity.

As affirming as Ripper letters can be, however, most also carry common northern stereotypes. One writer states, ‘I have left London because it was too hot for me […] I have come to Liverpool’.[12] This letter is a building block to create a northern image that is climatically different from the South. The writer affirms a place-based sense of identity through the colder Liverpudlian weather. This process extends to other, more harmful, stereotypes, however. Another writer states, ‘I am staying in Manchester at present, but dressed as a poor man’.[13] It is noteworthy that, in visiting Manchester, this Ripper feels the need to dress as a working-class man. Stereotypically, Karl Spracklen argues, ‘the north is a place where white, working-class masculinity is constructed and performed’.[14] Similarly, this author uses their Ripper letter to represent a stereotypically working-class and masculine image of Manchester. Another letter from Manchester states that ‘this part of the country is slow and innocent’.[15] This writer uses the Ripper to characterise the northern city as slow, both in intelligence and in contrast to the metropolitan capital. Regardless of the stereotypes, writers in the late nineteenth century continually used Ripper letters as prejudicial building blocks for constructing a unique northern identity.

This stereotyping may seem like a product of previous centuries. It is essential to recognise this process, however, because the stereotypes persist. In a recent Guardian article, one student from Stockton-on-Tees stated that ‘fellow [Warwick] students expressed incredulity that I had made it top of the class in my first year’.[16] England’s population still understands the north as ‘slow’ and ‘poor’. Challenging the Ripper myth through academic contributions thus dismantles this prejudice. This dismantling has not started yet, however. Instead, even Beltrao’s recent article implicates Liverpudlian ‘cotton merchant James Maybrick’.[17] Maybrick, a northern Ripper suspect, continues to live in the national imagination. As long as he and the Ripper letters live on, however, so will regional prejudice.

Matthew Gurteen (@megurteen) is coming to the end of the first year of his PhD at the University of Huddersfield. He studies true local crime in the nineteenth century, and he is particularly concerned with how authors negotiate regional identity across adaptations – or ‘revivals’ – of these crimes and their perpetrators in journalism and fiction. He has presented at several conferences, including the recent International Crime Fiction Association’s conference in Bamberg, Germany, and has been published online in blogs such as the Journal of Victorian Culture.

[2] All direct quotations in this article retain original spelling and grammar.

[8] It is worth noting that Coroner was born in Canada, complicating her regional status. (See Letters From Jack the Ripper. (n.d.). Jack the Ripper Tour.) It is unclear when she emigrated, however, and all contemporary articles label her as a northern woman.