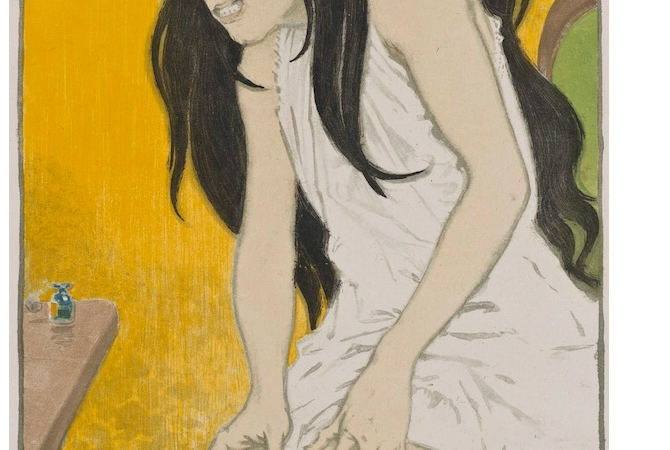 To be young, socially privileged, and in love; such is the happy situation of Felix Wilding, the euphonious hero of Robert Hichens’s 1902 novel. The object of Felix’s adoration is socially prominent Valeria Ismey, who is the more attractive for being older and married; this after all is the 1900s, and Victorianism, represented by Felix’s loving, ineffectual mother, is in retreat. No: Mrs. Ismey’s problem – one evident to the reader before it is to Felix – is her hopeless addiction to morphine. She must inject herself with the proper amount of morphine or see herself, and be seen by others, literally ageing by the moment: ‘her face became… abruptly, grotesque’, Felix notices.  He accompanies her on a clandestine visit to a chemist, not understanding the nature of this midnight excursion into the London drug underworld. Hichens exaggerates for effect, as registered chemists/pharmacists in 1902 were legally allowed to sell opiates over the counter under the provisions of the 1868 Pharmacy Act. Ultimately, Mrs. Ismey’s loyal ladies maid leaves her, and devastatingly, Felix, cognisant of her addiction, abandons her to her husband. The latter commits his wife to a Paris ‘home for the victims of morphia’ at Ivry-sur-Seine. Such a home really existed, run by noted specialist Dr. Henri Guimbail. 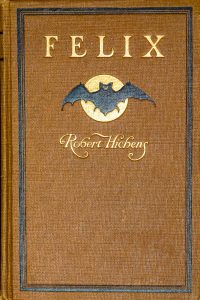 Hichens was a decent novelist – his credits include a brilliant satire, The Green Carnation, that Oscar Wilde admired even as he recognised himself as the novel’s grotesquely unprincipled central character. Hichens allows Mrs. Ismey a friend, a Lady Caroline Hurst. Lady Caroline has an ‘oddly unnatural and rather disgusting’ complexion, due to this aristocratic lady’s morphine addition; she has, however, learned to manage it successfully thanks to her ‘thoroughly devil-may-care temperament’, which Hichens attributes to aristocratic insouciance. Using ‘Carrie’ as cover, Mrs. Ismey tells Felix:  ‘this morphine craze is spread secretly all through modern society. Dozens of well-known London women could no more get on without their piqure [injection] than you and I without our cigarette or our cup of tea.  And in Paris it’s ten times worse.’  Felix has heard ‘something about it’ in the papers. A few examples of the sensational coverage afforded morphine use include Seymour Sharkey’s influential ‘Morphinomania’ in The Nineteenth Century  (1887) and the London Standard coining the phrase ‘Morphia Mania’ in 1892. Hichens read a story that originally appeared in Le Temps and was covered by newspapers as far away as New Zealand (“The Morphia Mania’, Southland Times, New Zealand, 27 April 1892). The Dr. Guimbail who ran the drying-out clinic at Ivry-sur-Seine recounted a semi-clandestine visit to a Paris morphine den catering to women addicts. He observed ‘numerous women sitting or lying in every imaginary posture … Their dull eyes were sunk deep into their orbits, and their complexions were colourless and cadaverous … Some were quivering from head to foot with involuntary convulsions’. The drably dressed hag in charge of the establishment called the women in one by one to administer piqures. Hearing Mrs. Ismey’s version, Felix innocently comments that he could never suppose that women who are ladies ‘could ever be like that, unless they were really mad’. 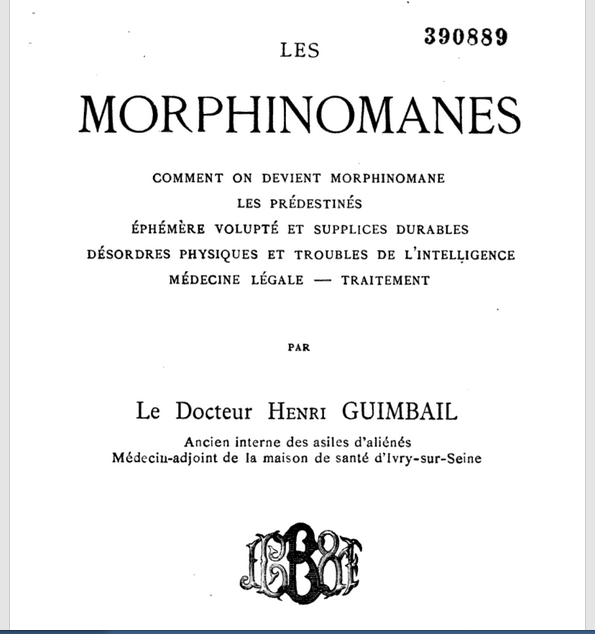 Guimbail made a career of caring for opiate addicts. His Les morphinomanes, published in 1891, is symptomatic of the shift in the medical literature noted by Howard Padwa in his study Social Poison. Experts came to believe that a short-lived morphine regimen administered for therapeutic purposes introduced certain susceptible persons to a lifetime of drug use. Quoting Padwa: once the potential addict had ‘a taste for opiates’ psychotropic pleasures … they began using trickery and deception to procure the drugs even when they no longer needed them’ (45). Guimbail thoroughly subscribed to this doctrine. Opiates, he claimed, insidiously bring out the person’s  worst personality traits. ‘Brain workers’ sought out opiates because they were addictive, using the analogy of the moth singeing its wings. The ‘fille d’Eve’ is a natural morphine abuser: (designed to shock and titillate: Eugene Grasset’s ‘artistic’ lithograph from 1897).  Jules Claretie, writing for Le Temps in 1881, made a special point of women users degrading themselves and becoming de-feminised.  Claretie purported to trace the degeneration of morphine from its origins as an effective narcotic used by doctors to a recreational drug adopted by the upper class, particularly bored, high-status women, and members of the demi-monde. 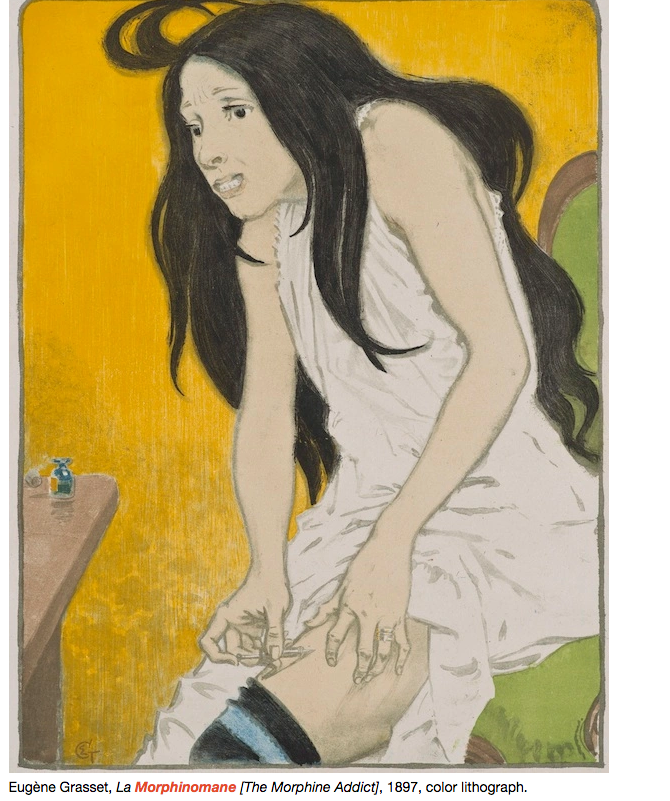 The popular novelist Eliza Humphreys (‘Rita’) wrote her 1905 Queer Lady Judas to promote a different set of texts, primarily Mary Baker Eddy’s Science and Health with Key to the Scriptures.  While Humphreys doesn’t mention Eddy, her narrator ‘Cecile’ is a professional masseuse and former nurse who offers what would now be called natural treatments. The upper-class women she caters to are consumed with their appearances and seduced by the ‘modern’ passion for luxury. Morphine enters the picture in the person of a young working girl of French extraction. Meeting her, Cecile is alarmed by Julie Thibaut’s singular appearance; her sickly white face, strange dark eyes, untidy mass of dark hair. She answers questions with a vague listlessness. Her father explains she has lost her typist job and is too enervated to seek other employment. It takes Cecile a further couple of chapters to bring out the dreaded word ‘morphineuse‘. ‘Morphia’, she tells Julie, ‘engenders a sort of madness’.  Julie’s confession scapegoats a set of wealthy intravenous morphine users, one of whom injected her ‘for fun’. She leaves behind a small case and hysterically returns to retrieve it: the contents are a morphine solution and miniature hypodermic needle. Cecile uses the needle to administer a piqure, warning Julie that this may be the last time. From then on Cecile does battle for Julie’s soul and body, administering piqures as needed. Julie is weaned off the drug, relapses; is reclaimed; relapses again, and is reclaimed once more. Cecile achieves what no physician could: she effects a personality change that makes Julie impervious to drug use. If only she could get her unhappy upper-class clients to follow a similar path! Humphreys ends with a coup d’etat that leaves Cecile inheriting a fortune.  The Spiritual life is the key to personal fulfilment. 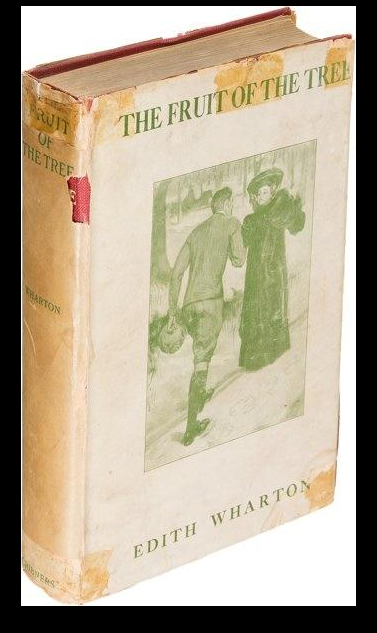 Charetie described morphine as ‘un instrument de mort, une poudre discrète, idéale pour les candidats au suicide’. And, indeed, also murder, citing a double murder case from 1823. Edith Wharton’s thoughtful and disturbing second novel The Fruit of the Tree opens with a discussion between Justine Brent and John Amherst over one of Miss Brent’s patients. Amherst, who assistant-manages the mill where the man with the mangled hand works, tells Justine, ‘I know what I should do if I could get anywhere near Dillon – give him an overdose of morphine and let his widow collect his life insurance.’ He asks Justine: ‘In your work, don’t you ever feel tempted to set a poor devil free?’ Justine muses about the professional instinct to save a life; it would always come first. ‘I daresay…poor Dylan would do it himself if he could.’ Two-thirds of the way through the novel, Justine’s friend, the mill heiress who has since married Amherst, suffers a paralysing riding accident. Justine watches Bessy Amherst’s inert body become ‘a mere instrument on which pain played its incessant deadly variations’. Bessy’s doctor and clergyman advocate continuing treatment from different perspectives. ‘Bessy’s eyes turned on her again. “Justine–” She knew what that meant. It was it an appeal for the hypodermic needle…There was really no word now–the whimperings were uninterrupted.  But Justine heard an inner voice, and its pleadings shook her heart. She rose and filled the syringe–and returning with it, bent above the bed…’ Later, after Amherst and Justice marry, Bessy’s former doctor Wyant blackmails her. Wyant is a longtime morphine user whose habit overcomes him and loses him his practice. In the aftermath Justine temporarily leaves Amherst rather than have him be suspected of wishing to do away with his first wife. Morphine as addictive substance and ultimate pain relief are equally fruits of the tree of knowledge of good and evil.

Wharton met the Cambridge scholar G. Lowe Dickinson in 1907 and undoubtedly read his essay praising euthanasia in Littel’s Living Age.  An unpublished letter to Sally Norton in 1905 and another letter in 1908 expressed Wharton’s support of mercy killing using ‘morphia’ in cases of friends who were comatose or terminally ill. Wharton’s Justine is (appropriately) conflicted. She has courageously put an end to her friend’s suffering; yet the tool she uses is one available to her as a professional nurse. Has she violated the ethics of her profession? Doesn’t her act violate society’s assigning the healing role to women? Wharton’s strength is she has no easy answers: her ambiguous ending suggests that Justine and Amherst’s marriage will survive thanks to a final compromise on Justine’s part.

Guimbail and Charetie target a version of the New Woman. Charetie quotes Guimbail: ‘C’est ainsi que la morphinomanie clandestine se développe à l’ombre de la Civilisation et du Progrès’. Morphine addiction is a dark byproduct of the impetus to reject traditional feminine roles. Mrs. Ismey and Lady Caroline are unencumbered by professions or children and, free to do as they please, turn to morphine out of sheer boredom. Their morphine use allows them to evade societal typecasting of feminine roles. In the broadest sense, Humphrey’s novel is about the push for feminine independence breeding selfishness.  Justine Brent has been hailed by various critics as a heroic ‘Brave New Woman’, ‘tamed by the book’s resolution’; see Donna Campbell’s introduction (xviii).

Interestingly, all three novelists were consciously writing for large audiences and incorporated morphine use into their fictions for a novel-reading public that included substantial number of women. In the broader sense one may see the novels examined here breaking what Arnold Bennett, writing in 1901, called the tyranny of ‘love plots’ (Bennett: ‘The Fallow Fields of Fiction’ ). Instead, our three authors boldly confronted a currently ‘hot’ issue; with – it should be said – varying success. In this respect they deserve to be seen within the still-wider context of our reevaluation of a decade of post-Victorian fiction.

Judith Hendra was born and educated in Britain, at Cambridge University,  and currently lives in Los Angeles. This is her second blog for JVC, following ‘Who Doesn’t Love Mother? The Endowment of Motherhood Wars of the 1900s’. She is currently finishing up a comprehensive biography of the writer Beatrice Hastings (1879-1923) and will be giving a paper about Hastings at the online conference ‘Women Writers and Comedy: 1890 to 1950 in September (2022). Articles for various journals include ‘Wyndham Lewis and The New Age’ in the 2019-20 edition of The Journal of Wyndham Lewis Studies and a study of the critical response to H. G. Wells’s Edwardian fiction in the 2020 edition of The Wellsian. She is a contributor to the International Center for Victorian Women Writers.