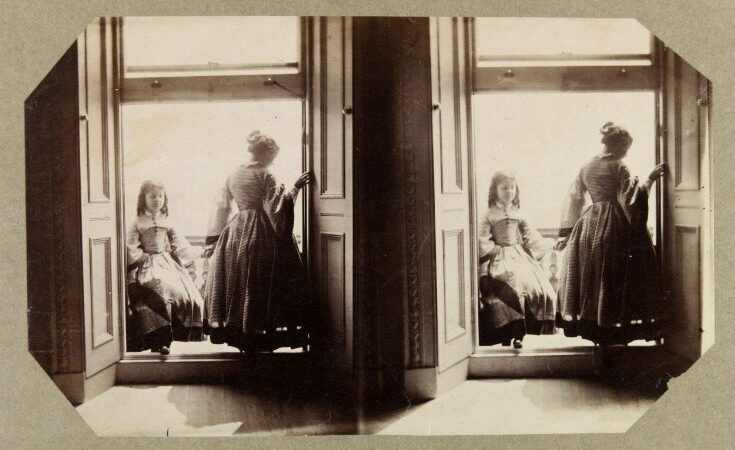 1st June 2022 marked the bicentenary of the birth of pioneering photographer Clementina Hawarden (1822-1865), one of the most significant women to contribute to early photography. In this blog I highlight a specific genre within the extensive Hawarden photographic collection at the Victoria and Albert Museum, London, concentrating on use of the silhouette as a stylistic motif in her photographic portraiture.

Viscountess Clementina Hawarden, née Fleeming, left an extensive oeuvre of collodion photographic images marking her brief embrace of the new art of photography, abruptly halted by her untimely death in January 1865. Her photographic skill and exploration of the new art is preserved in the 775 otherwise fugitive visual memories captured, printed, and later donated to the V&A by her granddaughter.[1]

Hawarden’s artistic eye is visible throughout the vast sepia album, comprising portraits of family, friends and estate workers, complemented by bucolic landscape views. Among her “studies from life”, Hawarden created a series of photographs that draw on stylistic motifs from the silhouette tradition, staged in disparate locations, from a carpenter’s workshop at their Dundrum estate in Ireland, to her large family home in London, transforming imitative portraiture into photographic works of art. Discourses on art by Sir Joshua Reynolds RA may have been familiar to Lady Hawarden, focusing on making “an impression on the imagination” rather than mere imitation of life.[2] A silhouette in its cut paper or painted form preceded photography as a form of portraiture; it aimed at verisimilitude but it always suggested rather than imitated, leaving detail to the imagination while retaining a cloak of mystery over its backlit subject.

Sophisticated manipulation of light is evident in Hawarden’s interpretive approach to photographic portraiture, becoming simplified into silhouette shapes by position or reflection, illustrating innovative and alternative views of her subjects. In a challenge to conventional portrait composition, Fig. 1 reveals her daughter Clementina in a reflective moment in 1861-2, but the mirror denies further clarity of her facial features which remain fixed in enigmatic shadow. The portrait reveals and conceals simultaneously.[3]

In Fig. 2, an unidentified Dundrum estate worker, photographed by his employer Lady Hawarden in his rustic workshop, evokes Dutch golden age artisan studies reimagined through the lens of a camera.[4] The man becomes a picturesque study of shape and form, harnessing gradations of monochromatic tonality rather than mere depiction of a photographic likeness of a carpenter at work. The image transcends its lowly subject and Victorian class division in a contradictory status of anonymity immortalised through the camera of a Viscountess.

In 1861, at Princes Gardens, London, Lady Hawarden revisited this pose in Fig. 3, once again positioning her subject facing a large window, bathed in soft light and viewed from the same angle in semi silhouette. On this occasion the subject is her husband Cornwallis Maude, Viscount Hawarden, standing before her camera, replicating the stance of the Dundrum worker. Locations are separated by the Irish Sea, and the subjects are significantly divided by wealth, but Lady Hawarden unites them in artistic composition of equal visual impact.

Constrained by location. yet creatively liberated by early photographic portraiture’s requirement for natural daylight, Hawarden understood the capabilities of the wet collodion photographic process and utilised its chemistry for the necessary visual magic to happen. A sensitised glass plate replaced an artist’s brush and palette, providing Hawarden with a photographic canvas on which to paint her subject in silhouetted profile by the action of daylight. In this stereoscopic study, Fig. 4, Hawarden depicts her two daughters in three dimensions, entering and leaving the balcony beyond the shuttered windows.

Lady Hawarden may have been familiar with the cut paper and painted silhouette work of Augustin Edouart [1789-1861], whose monochrome portrait of Henry Philip Hope, silhouetted against large Georgian windows adorned with long draped curtains, resembles her “studies from life” at 5 Princes Gardens.[5] Edouart’s publication, Treatise on Silhouette Likenesses (1835), explained the principle of shadow portraiture –

It is true, that there is little in the profile of the face; but it is equally true, that this little, is quite sufficient to afford a resemblance of the most satisfactory description.[6]

Hawarden’s artistic flair is evident in her use of background rather than foreground light. Reorienting the camera directly towards a light source inevitably produced silhouetted indistinct outlines, which in turn provided two distinctive perspectives for depicting sitters. Mark Haworth-Booth remarked that “She used light to dissolve form as well as to define it.”[7] In Fig. 6, Hawarden’s daughter Isabella Grace is photographed in eighteenth-century fancy dress in front of a mirror that reflects an additional silhouetted profile, presenting perfectly illuminated dual synchronous portraits.

Lady Hawarden’s use of silhouette motif in her photographic practice foreshadowed later, equally sensitive Pictorialist images by Gertrude Käsebier, whose subject assumes a similarly ethereal presence as a backlit profile before a window. Their portraiture belongs to different photographic eras, yet united by the timeless harnessing of light and shadow.

Lady Hawarden’s adoption of silhouette motifs in her photographic portraiture adds a unique contribution to a century of shadow art, from Edouart’s early pioneering cut paper portraits to the later Pictorialist photographs of Käsebier. Her wistful images continue to demonstrate the diversity of expressive portraiture depicted in photographic form; they evoke a peaceful serenity and visual calm that only minimal detail can portray.

In Lady Hawarden’s camera, ephemeral moments between 1857 and 1865 were photographically transformed and fixed; she is present in each picture yet invisible, but through her exquisite photography we witness, through her eyes, a semi-silhouetted figure within a haze of soft luminescence crossing a liminal space between objective reality and opaque mystery.

Rose Teanby is a PhD Candidate at the Photographic History Research Centre, De Montfort University, Leicester, studying early women photographers 1839-1861. Her research focuses on British professional and amateur women, highlighting their contributions to the first years of photography despite their marginalised social status. Rose posted a blog for the Journal of Victorian Culture in 2020 – Wish You Were Here: Victorian women pioneers of travel photography – and recently contributed essays to the 2022 Thames and Hudson publication A World History of Women Photographers.

I am indebted to Dr Annebella Pollen for her advice and guidance.

[1] Lady Clementina Hawarden – an introduction. “In 1939 the V&A held an exhibition commemorating the centenary of the invention of photography. The exhibition was visited by Hawarden’s granddaughter, Lady Clementina Tottenham, who was disappointed not to find her grandmother’s work on display. This prompted her to donate 775 photographs by Hawarden to the museum – about 90% of her life’s work.”