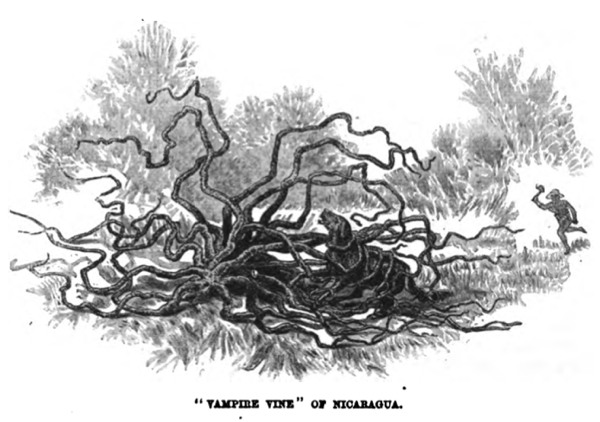 Readers of Gothic literature will quickly recognize that Irene is suffering from a vampire bite. She is not the victim of Dracula, Carmilla, or Lord Ruthven, though. Rather, it is a vampiric sumach tree that has attacked her during her sleep. Ulric Daubeny’s “The Sumach,” published in his collection The Elemental: Tales of the Supernormal and the Inexplicable (1919), is a fascinating killer-plant story. It tells of a tree that has grown from a stake plunged into the heart of a buried vampire. The tree possesses hypnotic powers that seduce young women to its branches to feed upon them. Irene awakens one night disoriented and horrified to find herself sitting in the tree:

…relentless, stick-like arms immediately closed in upon her, their vice-like grip so tight that she could scarcely breathe. . . darting at the fair, white neck as a wild beast on its prey. She struggled desperately, madly, for to her swooning senses the very branches of the tree became endowed with active life, coiling unmercifully around her, tenaciously clinging to her limbs, and tearing at her dress (Daubeny 36-37).

Tellingly, the tree turns an unnatural shade of red at the wrong time of the year after feeding: “the foliage was unusual, and the branches gnarled and twisted beyond recognition…the leaves were stained with splashes of dull crimson, but rather than droop, they had a bloated appearance, as if the luxuriance of the growth were not altogether healthy” (Daubeny 33). Eventually, a devoted husband figures out the tree’s secret and has it burned to the ground, but not before it kills one woman and sickens his young wife. 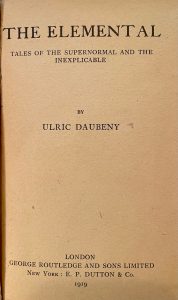 Daubeny (1888-1922) is a little-known British scholar whose other books were distinctly non-Gothic in nature — one focused on ancient Cotswold churches and another on the history of wind instruments. His story “The Sumach,” though, is an interesting addition to the killer-plant genre of the late-nineteenth and early-twentieth centuries. Numerous stories about deadly plants were published during this time, including H.G. Wells’ “The Flowering of the Strange Orchid” (1894) about an exotic orchid that strangles and nearly kills a man, Lucy H. Hooper’s “Carnivorine” (1889) about a Drosera plant that kills a man after evolving to possess “paddle-like feet” and the ability to move, Arthur Conan Doyle’s “The American’s Tale” (1880) about a giant flytrap that crushes and eats men in the American west, and Algernon Blackwood’s “Ancient Rights” (1912) about an entire forest that turns against a man sent to cut it down (Hooper 73). Gothic landscapes have of course always been part of Gothic literature, but stories about human-killing plants are unique. These plants are sometimes aligned with seductive women, sometimes reveal anxieties about colonial environments,[i] and sometimes are animal-like in their appearance and behaviour, thus highlighting fears about both human degeneration and vegetal evolution.

The plants in these stories usually either entangle and suffocate their victims, or they hungrily feed on the blood of their human prey. Stories about plants that possess or need blood are particularly interesting as they further collapse the boundary between human and non-human life. As Dawn Keetley points out, “[w]hile humans have long recognized a kinship with animals—indeed, the animal rights movement of the nineteenth century was founded on the solid ground of that affinity—human affinity with plants has for just as long been foreclosed” (6). These stories in which plants have veins and need blood (or a bloodlike sap) suggest that plants are our dangerous and monstrous kin. Plants are portrayed as needing to feed and protect themselves just like humans. The need for blood also, of course, aligns these plant monsters with vampire literature of the period. Yet, while formerly human vampires can be alluring and seductive (Dracula, Carmilla), there is something unnatural and particularly terrifying about a plant that grips young women in its branches while drinking from their throats. Further, it is not a single supernatural monster like a vampire, ghost, or werewolf that poses a threat in these stories as in other Gothic fiction, but an entire ecosystem that might evolve to work together to defeat human enemies. The implied threat is much larger.

Though Daubeny’s “The Sumach” is a striking example of this vampiric plant literature, it is hardly the only story about blood-sucking plants. Consider Phil Robinson’s “The Man-Eating Tree” (1881), for example. In it, the narrator’s uncle Peregrine Oriel travels to central Africa and encounters a tree that first grabs and kills a deer and then envelopes a young boy. The tree, “quivering through every branch, muttering for blood, and, helpless with rooted feet” yearns toward Oriel with every branch before he narrowly escapes (Robinson 11). Days later he finds the corpse of the young boy “with a hundred vampire leaves still clinging to it” (Robinson 14). Likewise, Fred M. White’s “Purple Terror” (1899) and Maud Howe Elliot’s “Kasper Craig” (1892) both tell of bloodthirsty orchids. Both White’s rare purple orchid and Elliot’s orchid that turns red after feeding have teeth (or teeth-like growths), suck blood, and attempt to kill their human victims. Orchids feature prominently in much of this fiction, in fact, likely inspired by the “orchid craze” or “orchidelirium” of the Victorian era that saw large numbers of private collectors seeking out new and rare species of the plants.

While these stories are entertaining and fun, they also express real fin de siècle anxieties about evolution and degeneration that proliferated after the publication of Darwin’s Insectivorous Plants (1875) and The Power of Movement in Plants (1880). The horror in them springs in part from the reversal of the natural order of things—rather than serving as food for humans, these plants seek to consume us. The idea that plant life might evolve and fight back against humans still fascinates us today too, as evidenced by contemporary eco-horror film and literature like The Happening (2008), The Last Winter (2006), The Girl with All the Gifts (2016), Jeff VanderMeer’s Annihilation (2014), and M.R. Carey’s The Book of Koli (2020). After all, humanity would be vulnerable against a planet that chose to fight back against the humans destroying it. So, even as you laugh at these tales of bloodthirsty plants, be sure to keep an eye on your orchids.

Melissa Purdue (@mmpurdue) is a Professor in the Department of English at Minnesota State University, Mankato. Her current research focuses on late 19th-century supernatural fiction, Human-Animal Studies, and environmental humanities. She has been published in Reassessing Women’s Writing of the 1860s and 1870s(Palgrave Macmillan 2020), The Wilkie Collins Journal, The Latchkey, and elsewhere. She is also editor-in-chief of the journal Nineteenth-Century Gender Studies (www.ncgsjournal.com).

[i] The focus of this brief article is not colonial anxieties in killer-plant stories, but see the following excellent articles for discussions of the imperial Gothic: Elizabeth Chang’s “Killer Plants of the Late Nineteenth Century,” Cheryl Blake Price’s “Vegetable Monsters: Man-Eating Trees in ‘Fin-de-Siecle’ Fiction,” and Elly McCausland’s “From the Plant of Life to the Throat of Death: Freakish Flora and Masculine Forms in Fin de Siècle Lost World Novels.”

Keetley, Dawn. “Introduction: Six Theses on Plant Horror; or Why Are Plants Horrifying?”Plant Horror: Approaches to the Monstrous Vegetal in Fiction and Film, Ed. by Dawn Keetley and Angela Tenga, Palgrave Macmillan, 2016, pp. 1-30.