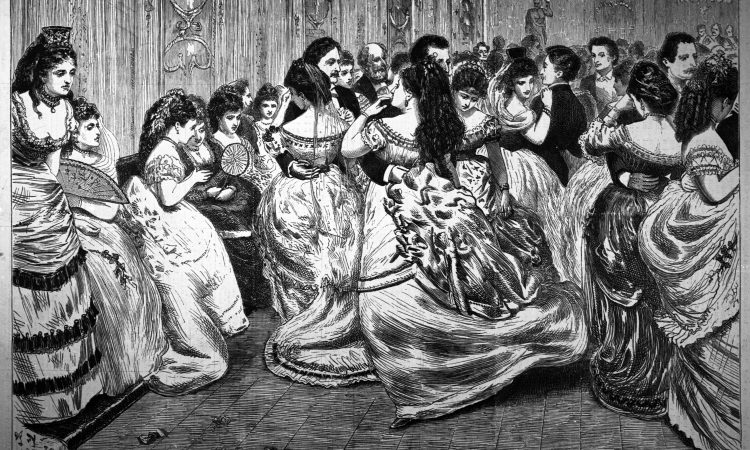 Dancing was perhaps the most universal and popular mixed-sex leisure pursuit in the nineteenth century. Yet dance was not purely a recreational activity. Ballroom etiquette demanded adherence to the rules of fashionable society, including precise rules for comportment, conversation, and choosing a dance partner. For upwardly mobile Jewish dancers, balls presented additional challenges. First of all, mixed-sex dancing was forbidden according to traditional Jewish law, which regarded men and women dancing together as a gateway to sexual impropriety. And while participation in fashionable partner dancing could be a sign of acculturation and integration into genteel non-Jewish society, Jewish dancers were often denied invitations to more exclusive dance venues and could be vulnerable to anti-Jewish social snubs at majority-Christian events. Both as a forbidden leisure pursuit and a marker of social acceptance, social dancing helps us chart Jewish engagement with European society in the long nineteenth century.

Jewish communities confronted dramatic social and political changes in the period between the Enlightenment and the Holocaust, including secularisation, religious reform, urbanisation, nationalist movements, immigration, debates about emancipation, shifting courtship norms, and changing notions about women’s role in society. For writers who sought to discuss the impact of these changes in their work, the dance floor offered an irresistible opportunity: if they depicted transgressive mixed-sex dancing as a metaphor for modernity itself, they could offer up social criticism while entertaining their readers.

British literature dominates scholarship of literary dance scenes, in large part due to the significance of social dance in Jane Austen’s novels. Yet Anglo-Jewish literature has rarely been included in this conversation, even though dances were an important way for British Jews to demonstrate their mastery of etiquette and make a claim for their place in society.[1] Nonetheless, several of the most prominent Victorian Jewish writers included ball scenes in key narrative moments in their work.

In his 1892 bestselling novel Children of the Ghetto: A Study of a Peculiar People, Israel Zangwill (1864–1926) uses the dance floor to compare “ghetto” (i.e. traditionally religious) and acculturated Anglo-Jewish life in the London slums of Whitechapel. He describes a Purim ball at a Jewish social club, which is attended by upwardly mobile Jews. In this light-hearted setting, young people dance, flirt, consume cakes and lemonade, and show off their finest clothing:

It was a merry party, almost like a family gathering, not merely because most of the dancers knew one another, but because “all Israel are brothers”–and sisters. They danced very buoyantly, not boisterously; the square dances symmetrically executed, every performer knowing his part; the waltzing full of rhythmic grace.[2]

Zangwill invokes a Jewish doctrine about brotherhood to show how this Jewish environment is characterised by close-knit relations between participants, and physical harmony on the dance floor.

Zangwill’s addition of the word “sisters” to his citation of Jewish communal feeling emphasises the importance of mixed-sex sociability in modern Jewish culture. Free mixing of the sexes is an important part of this heady new milieu at the club, where women are awarded a social freedom that was unthinkable in a traditional Jewish context. In sharp distinction, Zangwill’s description of traditionally religious Jews who do not attend the ball makes clear the tensions between a masculine brotherhood and the perceived dangers of female sexuality on the dance floor. He narrates: “[T]he ‘Sons of the Covenant’ sent no representatives to the club balls, wotting neither of waltzes or of dress-coats, and preferring death to the embrace of a strange dancing woman.”[3] Indeed, Zangwill’s description of the first dance between doomed lovers[4] Hannah Jacobs and David Brandon, who meet at the Purim ball, is evocative in its sensuality: “She put her hand lightly on his shoulder, he encircled her waist with his arm and they surrendered themselves to the intoxication of the slow, voluptuous music.”[5] This description of physical contact during a dance, accompanied by music, is the culmination of a verbal exchange at the sidelines of the dance floor throughout the chapter that suggests the emotional compatibility of the two dancers. Zangwill acknowledges the presence of desire at the Purim ball, yet in contrast to the more traditional “Sons of the Covenant,” Zangwill supports the brokerage of companionate marriages on the dance floor.

Dancing is similarly illustrative of Jewish social stratification in Amy Levy’s 1888 novel Reuben Sachs. Yet unlike Zangwill’s glowing description of the social club, Levy (1861–1889) uses a dance hosted by a Jewish family to critique Jewish social pretensions and materialism. The hosts of this ball, the Leuniger family, are very aware that hosting a dance can add to their social status. They take pains to invite Christian guests and resist including Jews who do not add to their notion of prestige. Levy describes interactions between potential dance partners in coldly commercial terms; a beautiful and high-spirited young woman who is known to have a generous dowry “goes down” as a tremendous social success.[6] Marriageable young men are aware of being a scarce resource and “were aggressively conscious of commanding the market.”[7] Nonetheless, dancing retains some measure of romantic choice: As Levy notes, “[A] great fortune . . . though it always brings proposals of marriage, does not invariably bring invitations to dance.”[8] Indeed, men still dance with women whom they would not consider marrying.

Levy uses the ball to heighten the romance between Reuben Sachs and his cousins’ poor relation, Judith Quixano, a beautiful Sephardic woman. Judith eagerly anticipates Reuben’s attendance at the ball, since it was “in the crowded solitude of ball-rooms that they had hitherto found their best opportunity” for flirtation.[9] Levy was acutely aware that a sheltered young woman might find the ballroom overwhelming, as she notes in an 1886 Jewish Chronicle article about the social limitations faced by middle-class Jewish women: “Carefully excluded, with almost Eastern jealousy, from every-day intercourse with men and youths of her own age, she is pIunged all at once––a half-fledged, often half-chaperoned creature—into the ‘vortex’ of a middle-class ball-room, and is there expected to find her own level.”[10] A ballroom is a space that, by design, allows for more relaxed mixing of the sexes, and young couples can flirt without their families interfering on financial grounds. When Reuben arrives to the ball late, he observes Judith in close conversation with another admirer, and he becomes jealous. Reuben performs a rather shocking breach of ballroom etiquette: he takes her full dance card and tears it into pieces.[11] By destroying the dance card, Reuben symbolically makes Judith off-limits for other men, even though he has not proposed to her––and never does, since in a dramatic plot twist he chooses to pursue a seat in Parliament instead of following his heart. Levy uses the ball as the emotional high point of her novel and as a way of interrogating the habits of her Jewish characters as they struggle to achieve social mobility.

In literary texts from the nineteenth century and beyond, writers deploy dance scenes to develop their plots and characters in a way that is enjoyable for readers. While these factors are also true for works that depict Jewish characters, such texts additionally use the dance floor to reveal the inclusion and exclusion of Jews in the era of acculturation and emancipation. Yet like the fictional ballroom escapades in Zangwill’s and Levy’s novels, Jewish encounters on the dance floor often end disastrously in literature, since writers could not imagine a successful combination of the marriage plot (where a woman achieves social mobility through marriage) and the novel of emancipation in a world where Jews did not yet have equal rights. As a result, the delights of the literary ballroom often lead to heartache and tragedy.

Sonia Gollance (@sgollance) is Lecturer in Yiddish at University College London, where she teaches in the Department of Hebrew and Jewish Studies. Her research interests include Yiddish Studies, German Jewish literature, dance, theatre, and gender. She is the author of It Could Lead to Dancing: Mixed-Sex Dancing and Jewish Modernity (Stanford University Press, 2021), a finalist for the 2021 National Jewish Book Award in Modern Jewish Thought and Experience.

[1] Molly Engelhardt and Cheryl A. Wilson briefly discuss dance scenes in George Elliot’s Daniel Deronda in their studies of dance in nineteenth-century British literature, yet they do not delve into the novel’s Jewish themes and characters.

[2] Israel Zangwill, The Children of the Ghetto: A Study of a Peculiar People, in Selected Works of Israel Zangwill (Philadelphia: Jewish Publication Society of America, 1938), 128. He cites Midrash Tanchuma, Naso 1.

[4] Hannah and David would not have been introduced by a matchmaker since David is a cohen (from a priestly lineage) and forbidden to marry a divorcée.