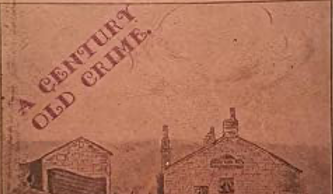 The floor was covered with blood, as if it was a butcher’s slaughter-house. The wall of the room, on three sides, was sprinkled with human blood, […] and even the glass of the windows, on the fourth side, were splashed with blood. [1]

Thomas Smith saw this when visiting The Moorcock Inn – more commonly known as ‘Bill’s-O’-Jacks’ – in 1832. The gore from father and son William and Thomas Bradbury was so thick that Smith repeated it three times in two sentences. When most readers imagine the Brontean Saddleworth moors, they likely picture Ian Brady and Myra Hindley’s infamous mugshots. Before their parents ever bore them, however, the location was known for Bill’s-O’-Jacks and the still unknown culprit(s).

Now, crime-obsessed visitors, or ‘dark tourists,’ journey to Saddleworth for the ‘Moors Murders’. [2] Similar tourists also flocked to Bill’s-O’-Jacks in even greater numbers throughout the nineteenth century. Recently, critics have become conscious of this phenomenon. Daniel P. Reynolds explains that ‘dark tourism’ is ‘mass travel to destinations associated with disaster, murder, and mass death. […] What distinguishes dark tourism as a modern phenomenon is that some calamities have captured the collective imagination through extensive media coverage.’ [3] Most critics have only explored ‘dark tourism’ in the twentieth and twenty-first centuries. Bill’s-O’-Jacks is nonetheless an example from the nineteenth. The local population travelled to this destination of death, captured by media coverage from the emerging periodical press. Tourists also travelled en masse. As Joseph Bradbury [4] noted in 1871, ‘some fifty or sixty conveyances […] deposit their burdens at this lonely inn’ every day. [5] Bill’s-O’-Jacks is a regional ‘dark’ tourist spot to which over a hundred people crowded per day.

Why would people choose to do this? As Duncan Light explains,

nation-states seek to construct and promote a national past to encourage allegiance to the political entity of the state and the social community of the nation. Central to this process is the construction and promotion of a shared (or collective) memory. […] Places of death, disaster or atrocity create opportunities for tourists to negotiate or affirm senses of nationhood. [6]

This construction of collective regional memory is what Bradbury is doing in Saddleworth Sketches. Structured as a guidebook, Bradbury describes Bill’s-O’-Jacks for an eager tourist group. He states in his introduction that ‘many years of happy childhood had been spent [in Saddleworth]. The memory of Bill’s o’ Jack’s, and the horrid catastrophe which has made the place so notorious, had not quite faded from my memory.’ [7] Bradbury, visiting Bill’s-O’-Jacks and encouraging others to do the same, relates his individual childhood experience to construct collective memory. In doing so, he affirms a regional identity separate from the nation’s other areas.

Bradbury was not the first to do this, however. Twenty years earlier, and only an equal time after the crime, an anonymous author who signed themselves ‘An Inhabitant of Holmfirth’ described a trip to Bill’s-O’-Jacks in The Huddersfield Chronicle. [8] They visit the murderous location with their sick friend, hoping that moorland air will aid recovery, alongside a designed encounter with the friend’s parentally prohibited love interest, Nancy Stevens. [9] Although the story is individual, the ‘Inhabitant of Holmfirth’ is still a ‘dark tourist.’ Their story contributes to the promotion of shared regional memory. One year later, an author using the same penname commented on the significance of Bill’s-O’-Jacks and other regional locations. They wrote:

it has for some time past been a favourite employment of ours to glean from the people themselves a little information respecting the history of the valley in which our lost boyhood was cast. The incidents in its history may not possess the thrilling interest for the general reader which appertains to some districts […] [10]

Bill’s-O’-Jacks is part of the region’s collective history and, like Bradbury, this author’s childhood memory. It separates the location from other districts. Nancy and her suitor’s love story may not thrill the everyday reader. They, through Bill’s-O’-Jacks, nonetheless affirm regional identity.

Bill’s-O’-Jacks also witnessed a famous tourist. Geraldine Jewsbury, author of Zoe: the History of Two Lives, visited the Inn shortly after the ‘Inhabitant of Holmfirth.’ She contributed an article for Dickens’ Household Words which similarly affirmed regional identity. As Jewsbury describes, ‘my friend, Miss Clytemnestra Stanley asked me to go with her and her sister, Miss Cordelia, to the Saddleworth Great Exhibition, and to have a day’s holiday upon the moors to gather bilberries.’ [11] On their way to the Exhibition, Jewsbury stopped at Bill’s-O’-Jacks. She found herself shuddering ‘at finding myself on the very spot where the old man [William] had lain.’ [12] Jewsbury is a ‘dark tourist’ in a regional travel narrative not uncommon in Household Words. Bill’s-O’-Jacks is only a tiny part of her ‘holiday’. Nevertheless, it is unique to the area, like the items displayed at the Saddleworth Exhibition. Both are spaces of shared memory.

‘Dark tourists’ continued to visit Bill’s-O’-Jacks into the twentieth century, purchasing postcards – like the one pictured on the right – to affirm regional identity physically. Would you like to visit Bill’s-O’-Jacks yourself? Unfortunately, the local council demolished the Inn in 1936 due to water contamination in the nearby reservoir. [13] The bones of the structure still stand, though. Lately, partially due to COVID-19 restrictions, locals have started ‘re-visiting’ the Inn, including Yorkshire Youtuber ‘Daft Monkey.’ [14] He recently journeyed in an eerie parallel with his father to ‘the actual location, the spot, where this murder happened.’ [15] If visits to Bill’s-O’-Jacks allow local ‘dark tourists’ to negotiate and affirm regional identity, then this process is still happening today. As ‘Daft Monkey’ says, ‘people were messaging me saying, “you need to go and film this. You need to go and revive this.”’ [16] There is a regional call for re-engagement with this two-century-old crime. ‘Daft Monkey’ ‘revives’ Tom and Bill’s story and regional collective memory by visiting the ‘dark tourist’ spot. The blood Thomas Smith saw is not yet dry. It continues to run with every ‘dark tourist’ at Bill’s-O’-Jacks.

After completing his Masters’ research into the transhistorical totemic construction of meaning in reporting and fiction on The Whitechapel Murders at Bangor University, Matthew Gurteen (@mattgurteen) has recently started his PhD at the University of Huddersfield on true regional crime in the nineteenth century. He is concerned with how authors negotiate masculinity and northern identity across adaptations – or ‘revivals’ – of these crimes and their perpetrators in journalism and fiction.