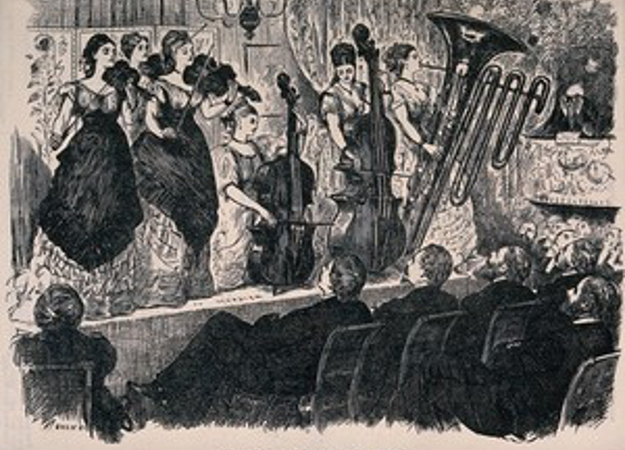 Alert: this piece contains spoilers for Hulu’s 2021 show Only Murders in the Building. Scroll down to read!

I should have known it was the bassoonist.

As a scholar of classical music and gender and a clarinetist myself, I can’t believe it took me until the second-to-last episode of Hulu’s 2021 murder mystery/comedy series Only Murders in the Building (OMITB) to realize that the serial killer at the core of the show was none other than Jan (Amy Ryan), the “first-chair” bassoonist of New York’s fictional “City Symphony.” Not only were subtle hints of Jan’s guilt—namely, an eerie bassoon motif—woven throughout the episodes, but in the context of women’s performance history, it makes perfect sense that the virtuosa would be the villain.

The show’s ten-episode arc follows three true-crime aficionados—Mabel (Selena Gomez), Charles (Steve Martin), and Oliver (Martin Short)—as they investigate the murder of their neighbor Tim Kono (Julian Cihi) and record their escapades on a podcast. At first, Jan’s reveal as the culprit seems to fuel the surprise ending of a show in which grave-robbers, jewelry thieves, and even the musician Sting had comprised the list of suspects. After all, Jan is the endearingly dorky musician who wears bassoon-themed shirts, carries an instrument case covered in stickers, and makes bad musical puns (“You’ll hear me bassooner or later,” she teases Charles). Mabel’s early comment sums up how viewers are led to feel about Jan: “A lot of bassoon jokes, but she’s cute.” In one particularly charming scene, Jan and Charles exchange musical motifs across the courtyard—she on her bassoon, he on his accordion—to tunes such as “If You’re Happy and You Know It” and “Take Me Out to the Ballgame.” Jan’s worst flaws, it seems, are that she bakes “dry” pizza rolls (according to Oliver) and awkwardly inserts herself into the podcast team without reading the group’s social cues.

And yet, the unveiling of Jan as the killer is actually quite consistent with centuries-old stereotypes of female musicians as excessively ambitious, hypersexual, and even murderous. These stereotypes were especially common in the Victorian period—a time when professional female instrumentalists first began to make their way onto the symphonic stage due to the opening of music conservatories to women, the founding of “ladies’” orchestras, and the success of celebrity virtuosi like Adelina Patti and Wilma Norman-Neruda. In contrast to the “heroine at the piano” figure beloved by Victorian literature and culture—the gentle, docile musician who played in the parlor and delighted her family members and suitors with her lovely British tunes—the professional female instrumentalist represented a new, and to many dangerous, kind of performer (Burgan 51).

Upon their arrival onstage in the late-nineteenth century, professional female musicians were, unsurprisingly, greeted with a host of sexist stereotypes. While “heroines at the piano” lightly tickled the ivories with the tips of their fingers, female violinists, flautists, and (heaven forbid) cellists displayed “awkward motions or altered facial distortions” when they played (Gillett 4). If they weren’t too ugly, they were too sexy. In Joseph Conrad’s Victory, as musicologist Paula Gillett notes, the male protagonist is entranced by “the movement of the bare arms, in the low dresses, the coarse faces, the stony eyes of the executants, there was a suggestion of brutality—something cruel, sensual, and repulsive” (qtd. in Gillett 114). Women’s onstage displays of their bodies conjured up common nineteenth-century charges (often leveled against actresses) of female performers as prostitutes. The Victorian artist George Du Maurier’s Punch cartoon “The Fair Sex-Tett (Accomplishments of the Rising Female Generation)” (1875) satirizes female musicians as at once ridiculous (note the comically giant brass instrument of the woman on the right), hyper-sexualized (note their dresses of “deep décolletage, the expression of female sexuality best known to Victorians,” as Gillett writes), and subject to the voyeurism of the men in the audience (note the man with binoculars on the right) (Gillett 111).

We can thus read OMITB’s Jan as the very embodiment of these age-old stereotypes of women musicians as hyper-ambitious, hyper-sexualized “sirens” and “divas.” Jan appears most obviously “siren”-like in the scenes in which she woos Charles with the deep, sultry bassoon sounds that float out of her open window, especially when she plays the “Berceuse” solo from Igor Stravinsky’s Firebird suite—a piece that, in the ballet, the Firebird plays to put everyone to sleep. In this context, Jan’s music serves not as a charming detail of her courtship with Charles, but rather the mechanism by which she entrances and manipulates him.

The show goes to great lengths to sexualize Jan and, crucially, to render her eroticism inextricable from her musicality. Though couched in nerdy musical language, many of her jokes serve as thinly-veiled sexual innuendos. In one scene, she sports a shirt that reads, “The only thing sexier than a bassoon is me with a bassoon.” In one of her cross-courtyard musical courtship moments with Charles, Jan plays the melody to “Do You Think I’m Sexy.” As the show progresses, it goes to almost absurd lengths to heighten Jan’s voracious sexual appetite. References to her sex life with Charles abound, including a Scrabble game featuring words like “hard” and “wet,” as well as Jan’s cheeky comment to Mabel that “Brazos was our safeword.” After she is injured (a self-inflicted knife wound intended to throw the podcasters off the scent, as we later learn), Charles encourages her not to play in the symphony that evening, but she replies, “All I have to do is sit and blow.  No comment on that?” While I at first read the show’s emphasis on Jan’s sexuality as a somewhat empowering and sex-positive representation of a woman unapologetic for her erotic appetite, the show quickly unsettles these more affirmative connotations by explicitly linking her musically-inflected sexuality with her murderous actions. After all, the show’s hyper-sexualization of Jan reaches its apex when Mabel and Oliver realize that what they thought was a “sex toy” in the victim Tim Kono’s box of erotica is, in fact, a bassoon cleaner—and the key piece of evidence that confirms Jan’s guilt.

Jan’s musical life not only intersects with her sexual machinations, but also fuels her murderous rage. On their first date, Jan tells Charles that she really wanted to play the flute, but that her new half-sister “stole both [her] date and the flute, leaving me the bassoon, my second choice.” (“The being second thing is kind of a thing for me,” she admits). As we learn throughout the show, Jan is actually not the section’s principal player; that honor goes to a prodigy named Allison, whom we later learn is the “youngest first-chair bassoonist in the symphony’s history.” In the second-to-last episode, Charles goes to the symphony to hear Jan play the famous Firebird solo but instead learns that Allison will be performing the piece, with Jan as the second bassoonist. As Allison steps onstage, grinning through her braces, we see Jan heave a giant sigh, and Charles’s nose begins to bleed (a common anxiety symptom for him) as he understands the lengths of Jan’s deception. Here, Jan is the “diva” whose thwarted artistic ambitions render her a killer.

After Jan realizes Charles is at the concert, she follows him home, lamenting, “They won’t notice I’m gone, which is pretty devastating to say out loud, honestly.” She explains to Charles the extent of her unfulfilled musical aspirations: “I think it has to do with being beaten out by a child.  Maybe this was why all the adult doctors were so mean to Doogie Howser.” Jan’s lethal pursuits are cast as direct results of her thwarted musical dreams. After she drugs Charles—the poison hidden in a tissue she gives him to stop his nosebleed—she reveals that her music was literally her alibi; she played a recording of her bassoon music at the time of Tim’s murder so that the other residents would think she was practicing. A chase scene through the bowels of the apartment complex ensues, during which Jan opens the fireplaces and tries to gas the whole building. However, the show (mostly) has a happy ending: Jan is eventually arrested, Charles recovers from his poisoning, and the three podcasters release their triumphant final episode. Viewers are left with the final impression that it is, above all, the female musician who must be feared.

At first, I was charmed by Jan’s appearance in Only Murders in the Building. Classical music rarely gets air time on the small screen, and even rarer are storylines featuring female performers (let alone those who play reed instruments). Jan is skilled, successful, and attractive. Her monologue, which opens Episode 9, offers a thoughtful and heartwarming meditation on her passion for making music. A voiceover reverberates over an image of her alone onstage, sporting a stunning red dress:

New York in winter is no friend of the bassoon. A cold instrument will go flat on you. Takes extra time and care to warm her up, to make her feel comfortable in your hands again. I’ve avoided giving my bassoon a name, like Betty. Preferring to think of her as a beautiful stranger. To make it special, every time I pick her up, like we’re meeting the first time, learning if we might play well with each other, if we might work as one, which is the only way it can work.

Here, Jan articulates a tender, thoughtful reflection on the profound and intimate connection between instrument and player. Yet, this is patently not what viewers are left with as far as Jan is concerned. Rather, as the final episodes unfold, it becomes clear that OMITB, however unwittingly, ultimately falls back on Victorian-era stereotypes about musical women—and, we might add, any ambitious or successful women—as depraved, deranged, and dangerous. Female musicians might be talented, ambitious, and sexual, but they are also the ones who will murder their lovers and gas the whole building. Hell hath no fury like a reed player scorned?

Shannon Draucker is Assistant Professor of English at Siena College in Loudonville, NY. Her research explores the intersections among Victorian literature, music, and gender and sexuality. She is also a classically trained clarinetist.