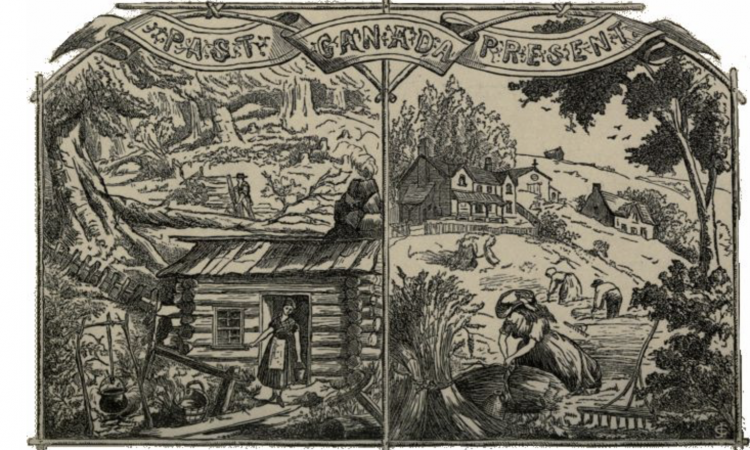 The nineteenth-century Anglo-Atlantic world, although fractured by emergent national categories after 1776, continued to share a vibrant literary market united by language and trade.[1] Charles Dickens and Sir Walter Scott were popular in Britain, Canada, and the United States, and James Fenimore Cooper was read and imitated on both sides of the Atlantic. British literature provided Canadian colonial writers with models to emulate and with iconic names to admire; Canadian book buyers dealt with American, as well as with British sellers; American publishers reprinted British and Canadian books eagerly, often without copyright, and these American editions were often available across the Canadian colonies at lower costs than the direct imports from Britain.

Yet, how imperial Victorians read reflected the complicated dynamics of the Empire and of global geopolitics and the growing rivalry between the United States and Great Britain. Before the Dominion Act of 1867, which created Canada as a self-governing dominion within the Empire, British North America was an ideological battleground where ideas about monarchy, republicanism, and participatory democracy intersected and competed with one another. The evolution of American and of English literatures in the nineteenth century followed the politics of the time, albeit indirectly. American nationalism coincided with Romanticism and built on the romantic emphasis on the natural connections between land and the people that inhabited it.[2] Early American literature replaced colonial hierarchies with republican ones, and encouraged readers and authors to position themselves at the center of an American experience, rather than on the periphery of British culture.

Due to their North American subject-matter, colonial Canadian writers were unwittingly drawn into this rhetorical duel, even when their topics were not political in themselves. Their books’ editorial trajectories followed the same political divides as the English and the American ones, but with a greater flexibility of perspective which allowed Canadian colonial writers to identify with both their British and their American readers. After all, while the British book market was highly desirable, the U.S. one was closer, and much more lucrative. Publishing in both countries was a reality of life for those who turned to the pen to make a living in British North America; in the process, the texts themselves were often altered (sometimes by the authors themselves) in order to suit the political views of their various audiences.

One case in point is the work of Canadian national literary icon Susanna Moodie. Although she has been firmly wrought into the Canadian literary canon as the founding mother of national literature, Susana Moodie’s only claim to Canada upon her arrival was derived from the imperial ideology that cast all colonies as extensions of Britain. Moodie was the daughter of an impoverished English merchant ruined by the economic downturn that followed the Napoleonic Wars. In 1832, together with her husband, an officer on half-pay and no prospects in Britain, she joined the flood of newcomers seeking a better life in Canada. The transition was far from smooth, and the family’s hardships on the rough Canadian frontier provided Moodie’s inspiration for her subsequent literary output. Although the Moodies ended up enjoying relative comfort later on, throughout her life, Susanna saw herself as an exile in the New World and infamously compared her love for Canada to the feelings which “the condemned criminal entertains for his cell,” (a statement which at the time did not particularly endear her to Canadian readers).[3]

Moodie had started her literary career in London, before her emigration; she never returned to England although she kept her literary contacts in London and continued to publish there, as well as in the colonies. Moodie’s first and most popular Canadian book is an example of how North American content was changed on the transatlantic book market in reaction to the national rivalries that pitted the U.S. against the British Empire. Roughing It in the Bush is a collection of essays and poetry written in the 1830s, after the Moodies’ immigration to Canada, and then reworked in the format of a memoir in 1852. It was published in London by editor Richard Bentley, who marketed it ­­to English audiences as an emigrant handbook and a true story of an English gentlewoman’s struggles on the northern outskirts of the Empire. The Bentley edition was the basis for several other impressions over the next years and for a second English edition in 1854. The book sold very well and received considerable attention in the literary journals of the day in England and Canada, with generally favorable reviews.

Both editions featured multiple patriotic epigraphs and poems that celebrated Canada’s imperial membership, including three rebellion poems that excoriated the 1837-1838 anti-colonial uprisings that shook French and English Canada. Throughout the book, Moodie inserted multiple critical commentaries on the differences between customs in England and the social mores in the colonies, radically “corrupted” by the proximity to the U.S. and its pernicious republican and democratic culture: the Canadians whom Moodie encountered in the bush were “Yankeefied Britons,” and “Yankeefication” was the general process through which American political ideas sapped the loyalty of the colonies. The second British edition largely kept the structure and tenor of the first, but added an essay by Moodie’s husband, John W. D.  Moodie, which provided a broad account of the economic and political situation in Canada, and explained the British-U.S. tensions over British North America.

In Canada, Bentley’s Roughing It circulated alongside American-published versions of the book which were easier to obtain, and presumably more affordable, but which were noticeably altered, in order to appeal to their implied American (therefore republican and possibly anti-British) readership. The first American edition was published in New York by G. P. Putnam’s Sons, only a few months after the 1852 London edition. The text was altered by Putnam’s editor, Charles Frederick Briggs, without Moodie’s permission or knowledge. Briggs excised many of the epigraphs and most of the pro-British patriotic poems. Gone are also all textual expressions of loyalty to the British Crown, as well as the words “ultra-republican,” “republican,” and “democratic,” which Moodie customarily used as pejorative terms whenever describing the egalitarian social mores of the Canadian colonies.[4]  John Moodie’s chapter on Canada and its complicated relationship with the U.S. was also expurgated, and the result was marketed as a sort of frontier adventure, an exotic ‘far-west’ romance of life in the Canadian backwoods. The result was very popular with American readers, and widely reviewed in local periodicals and literary journals. This version was the basis of numerous impressions, by Putnam and by other U.S.-based publishers,  and reprinted widely across North America over the next decades.

By contrast, Susanna Moodie was directly involved in the alterations to the book’s first Canadian edition, published in Toronto in 1871. Still smarting from the negative colonial reception of the first edition of Roughing It two decades earlier, the author purposely removed “many objectionable passages” that might still “arouse [the] anger” of her Canadian readers, and drafted a new introduction that praised Canada’s economic, political, and social progress in its journey from colony to Dominion.[5] Overall, the textual changes toned down the book’s old pro-imperial tone, and shifted the focus on Canada’s potential as a young country, away from the immigrant nostalgia which dominated the first edition.  The pro-British epigraphs were eliminated, as were the sections commenting directly (and negatively) on colonial social mores and on the Americanization of Canadian society, including all the rebellion poems. According to Canadian literary critic Carl Ballstadt, the 1871 Toronto edition “played a significant role in sustaining and renewing Susanna’s reputation as an important Canadian author,” and was the basis for later republications in the twentieth century.[6]

As Susanna Moodie’s case demonstrates, the Britishness of colonial literature was a slippery construct, easily manipulated in order to appeal to readers in different ideological or national contexts. This mutability of identity and perspective reveals the process by which the political boundaries dividing the literary world of nineteenth-century North America were gradually solidifying around the ideological poles of empire and republic, and the active role that literary texts played in the process.

Oana Godeanu-Kenworthy is an Associate Teaching Professor of American Studies in the Global and Intercultural Studies Department at Miami University, Ohio. Her research focuses on transatlantic and hemispheric studies, settler colonial literatures, and the relationship between fiction, film, and political ideologies. Her latest book, Between Empire and Republic: America in the Colonial Canadian Imagination, came out in 2022.