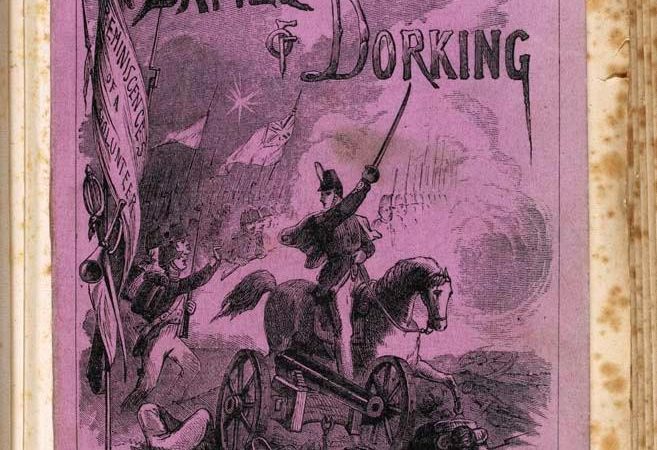 The unnamed narrator of Lieutenant-Colonel George Chesney’s invasion scare story, The Battle of Dorking: Reminiscences of a Volunteer (1871), is a complex character. His war-experience, recounted to his grandchildren in 1921 before they emigrate to a ‘new home in a more prosperous land’,[1] contains several details which should elicit readers’ sympathy – or, at the very least, pity. After he volunteers to defend Britain from German-speaking invaders, the protagonist experiences several distressing ordeals in 1871. At the titular battle, he is injured, thrice; his best friend, Travers, is mortally wounded; Travers’s son, Arthur, has his head blown off by a German shell in front of the narrator; and, to compound his misery, Britain is annexed into the German Reich. Yet despite this catalogue of tragedies, Chesney portrays his protagonist as someone who should provoke anger, revulsion, and contempt. 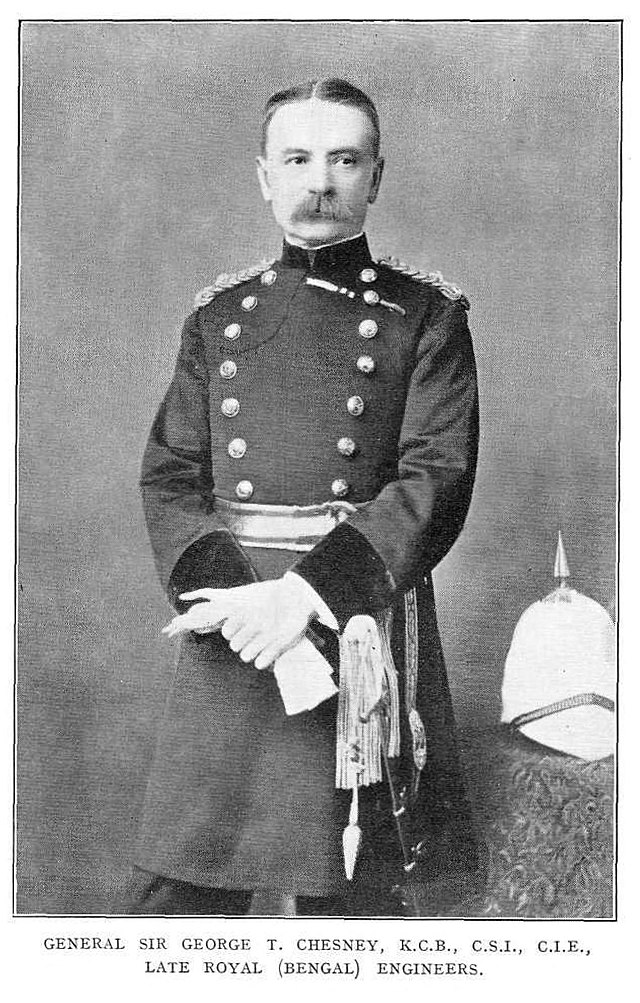 There are many ways in which Chesney communicates that the Volunteer ‘is certainly not the hero of the story’ to the readers of Blackwood’s Magazine,[2] the monthly periodical in which the tale was first published anonymously before its sensational success.[3] The narrator, like his father and other middle-class men in the tale, frets about how the impending German invasion will diminish his personal finances before appreciating the threat to national security.[4] He abandons Travers’s wife to the whim of the German soldiers who have commandeered her home, a fate subtly coded to entail further sexual assault. And he presents himself as an ill-disciplined and inept soldier in his own war-story. These actions and responses are components of the story’s wider theme: that the English middle-class man of 1871 had a deficient masculinity in comparison to his predecessors. The contemporary English man, who supposedly saw military service as a hobby and preferred lavish material comforts, was deemed incapable of performing an assumed masculine martial role believed to have characterised his ancestors.[5]

An interesting feature of this unflattering stereotype of bourgeois Englishmen as utterly incompatible with martial roles is the depiction of fighting as deeply traumatic for the narrator.[6] This characterisation is discernible by considering the narrative as containing two timelines: 1871 and 1921. In 1871, certain events happen towards the end of the battle that suggest the cumulation of distressing experiences induce a nervous breakdown for the Volunteer. After the British line is broken, the narrator is drafted into another battalion and shoved into a shed acting as a makeshift defensive position. As he is sat nursing his wounded shoulder and leg among his comrades, a German shell scores a direct hit on the building. The explosive causes a tremendous amount of damage, uprooting ‘the steps resting against it [the wall], and the men standing on them, bringing down a cloud of plaster and brickbats’, one of which hits the Volunteer on the head.[7] The incident breaks his resolve, and he decides to head home despite others around him continuing to fight to the bitter end. Whilst staggering back home, he stops to check on Travers at his house. He discovers that he is nearing death, and moves to comfort his friend’s confused son, Arthur. Seemingly acting as a homing beacon for German artillery, another shell explodes in his vicinity. A fragment bursts through the open doorway, blowing off part of Arthur’s skull and killing him instantly. The sight unsettles the narrator, who faints whilst trying to pick up the deceased boy.

These incidents are used to ascribe a mental fragility onto the Volunteer. He displays an inability to cope with witnessing the horrific wounds and death attached to warfare. Meanwhile, his decision to return home presents the narrator as a gutless figure who is easily disheartened in comparison to his comrades making a defiant last stand. The Volunteer of the 1871 timeline, in short, is presented as having a delicate mental disposition; quickly losing his appetite and enthusiasm for warfare once he actually experiences the horrors it entails.

The 1921 timeline – the narrative voice of Dorking – carries these traumas inflicted on the Volunteer’s psyche in 1871. At times, this is voiced explicitly by the narrator. He expresses a vivid memory of an artillery general who died in front of him, saying ‘I think I see him now, a very handsome man, with straight features and a dark moustache, his breast covered with medals.’[8] Meanwhile, when he recalls the first gunshot of the battle, he says ‘It was the first time I had ever heard a shot gun fired, and although it is fifty years ago, the angry whistle of the shot as it left the gun is in my ears now.’[9] These descriptions of combat, which fixate on the bloodshed, gore, and panic of a battlefield, produce a vivid and compelling narrative. Significantly, Chesney uses this narrative device to denote that the Volunteer suffers from combat trauma. Despite fifty years separating the battle and the storytelling, he recalls the tale in a phenomenal amount of detail. It is almost as if he has been reliving the battle in his head ever since its conclusion, a point alluded to in his confession that, ‘though fifty years have passed, I can hardly look a young man in the face when I think I am one of those in whose youth happened this degradation of Old England’.[10] The tale’s subtitle, Reminiscences of a Volunteer, also implies that this act of remembering the battle has been undertaken many times before.

However, the astonishing level of detail is accompanied by gaps in his memory and warped perceptions of time. Recounting a period of hand-to-hand combat, the narrator states that ‘how it came about I know not, but we found ourselves falling back towards our right rear’.[11] Meanwhile, whilst remembering an artillery barrage raining down around him, he states ‘Sometimes when I try and recall the scene, it seems as if it lasted for only a few minutes; yet I know, as we lay on the ground, I thought the hours would never pass away’.[12] These inconsistencies point to the narrator struggling to grapple with what he experienced; an inner turmoil caused by the desire to forget chafing against entrenched memories.

What insights does this identification of fictional combat trauma provide? On the one hand, it illuminates that men serving in the military were expected to be resistant to the horrors of war. Chesney’s tale offers no sympathy for soldiers who express distress and fail to suppress their trauma. The condemnation of the Volunteer centres on his finding warfare traumatic and, crucially, failing to ‘harden’ himself to its horrors – a byword for emotional repression.[13] As such, the story articulates a potent middle-class fantasy that English manliness was characterised by a notionally timeless stoicism; that no matter the peril or hardship, English men would, and should, maintain ‘stiff upper lips’.

Yet despite espousing this expectation of living up to former martial masculinities, it is possible to see the story, and by extension, its author, as failing to live up to its own demands. Chesney experienced active combat during the Indian Rebellion of 1857, and was wounded at the Siege of Delhi. With this in mind, his candid account of combat in Dorking, with bullets whizzing around, piercing cries of agony, the thunder of artillery, and pools of blood, becomes more than an example of captivating writing. It suggests that Chesney may have drawn on a personal experience of combat trauma, and that the story may have been a means of releasing repressed memories.[14] This context means that the Volunteer –ashamed of his failure to embody a heroic martial masculinity that supposedly characterised his ancestors – may transform into a mouthpiece for Chesney’s inner torments. In this light, The Battle of Dorking provides an insight into the psychological turmoil that plagued a Victorian ex-serviceman: a man caught between living up to nostalgic martial masculine ideals, and desire to express his misery and trauma. 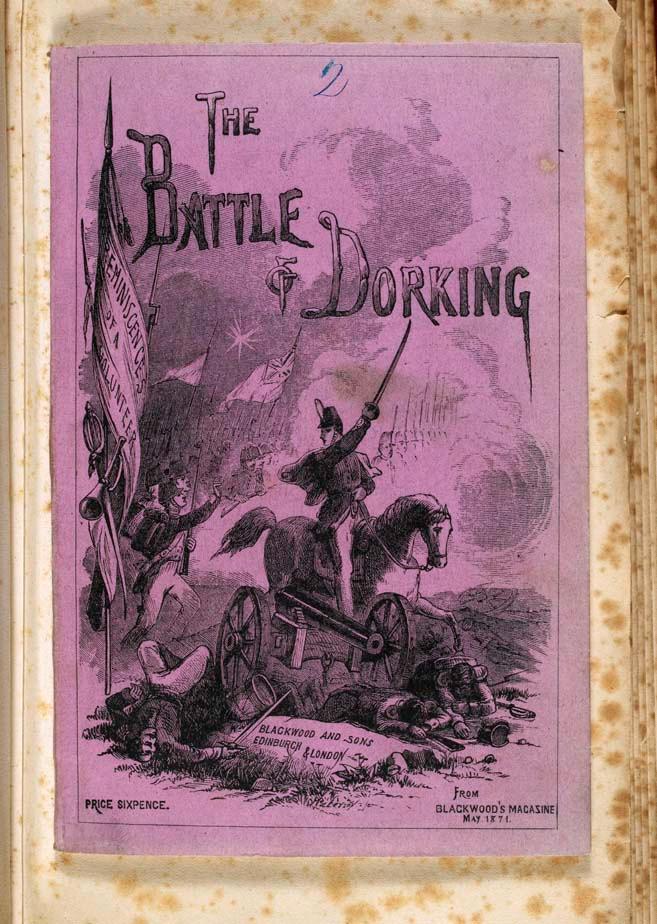 James Earnshaw (@JamesEarnshaw9) is a PhD student at the University of St Andrews researching expressions of masculine nostalgia in the mid-Victorian and Edwardian press, cultural works, and political speeches. More broadly, his research interests include the history of sexuality, as well as the history of emotions.

[3] For more information on how The Battle of Dorking achieved astonishing commercial success, see David Finkelstein, ‘From Textuality to Orality – The Reception of The Battle of Dorking’ in John Thompson (ed.), Books and Bibliography: Essays in Commemoration of Don McKenzie (Wellington, 2002), pp. 87-101.

[6] ‘Combat trauma’ is used in this piece, rather than post-traumatic stress disorder, to avoid issues of diagnosing individuals in the past with medical conditions. See Diane Miller Sommerville, ‘“A Burden too Heavy to Bear”: War Trauma, Suicide, and Confederate Soldiers’, Civil War History 59.4 (2013), pp. 453-454.

[14] This point builds on research that calls for historians to consider the emotional literacy of Victorian soldiers. See Holly Furneaux, Military Men of Feeling: Emotion, Touch, and Masculinity in the Crimean War (Oxford, 2016).