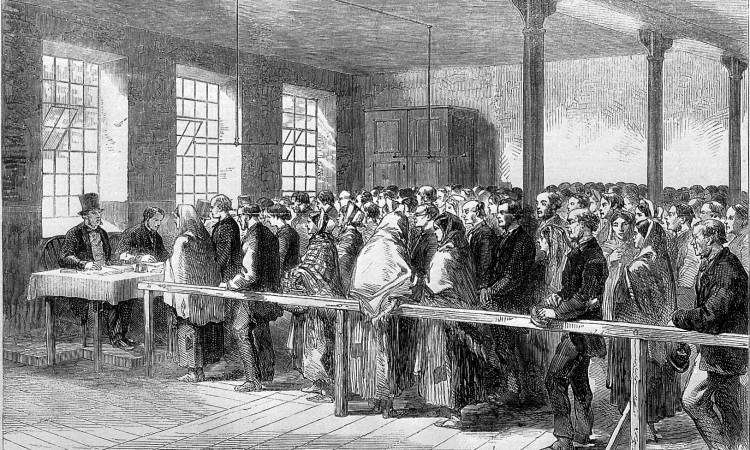 The Cotton Famine (1861-65) was a significant era of poverty and unemployment resulting from a blockade on raw cotton during the American Civil War, which hit Lancashire’s textile communities particularly hard. It produced a wide variety of contemporary literary responses, many of which have been under-discussed in scholarship on Victorian industrial literature.

In the past decade, however, more effort has been put into archiving and analysing these responses. This is primarily seen in the University of Exeter’s open access digital archive Poetry of the Lancashire Cotton Famine led by Dr. Simon Rennie, who subsequently published a paper in the Journal of Victorian Culture about his findings.[1] These poems largely appeared under pseudonyms or initials and in local newspapers of the period. Archives of this period also reveal that there were a number of novels produced during and about the Famine, including Probation by Jessie Fothergill (1879), a now out-of-print author who was successful in her own lifetime.

The contemporary poetry focuses on the financial and personal impact of the Famine on people living in Lancashire, while also considering its international causes and implications. It is contested between historians whether the crash they experienced and wrote about would have occurred even without Lincoln’s cotton blockade, due to the alarming rates of overproduction of cotton abroad in the years leading up to it and not enough demand abroad. In either case, Lancashire’s key place within the international textile trade of the late nineteenth century is highlighted. This is indicated in the poetry through a number of avenues. Poems like ‘Abraham Lincoln, Assassinated April 14th, 1865’ by Laon, and ‘Freedom to the Slaves’ by G.G.N. express support for slavery abolition from an international workers solidarity perspective, as well as a moral one. J.B.L.’s ‘“Oh, Ring the Factory Bell!”’ demonstrates awareness of the war, but its narrator is uninterested in its causes and possible outcomes because of the rife poverty it has resulted in in Lancashire. A similar perspective can be found in R.R.B.’s ‘Few Can Work and Many Must Weep’, and ‘Give Us Our Daily Bread’ by Thomas Hodson.

Unlike these poems, Jessie Fothergill’s Probation was written and published after the war ended. Her characters, including a Radical cotton-mill owner called Sebastian and a factory employee called Myles, who spends his free time reading international workers’ newspapers, are thoroughly in support of Lincoln, the Union and slavery abolition. This view is echoed by a (literal) crowd of factory employees; Sebastian tells them they will come into employment difficulties, but he expresses full sympathy with Lincoln’s side, to which his workers reply with ‘a murmur, deep and strong, of profound approbation.’[2][3] Sebastian assures them that the war is necessary, so that when he can give Lancashire cotton again, it is not ‘“from the slippery vantage-ground of slave labour upon which they have hitherto depended.”’[4] This is, again, greeted with a murmur of approval, and the narrator assures us that this approval remains in place ‘throughout those bitter years’ of the cotton famine.[5]

A pessimistic reading of this solidarity would be that Fothergill has the benefit of knowing who wins the war, and that slavery abolition is, indeed, achieved, allowing a degree of exceptionalism for her fictional labourers. The views of her characters are not nearly as complex as those displayed in the Famine’s contemporary poetry, which largely criticised the length of the war as it continued to impact them by plunging them into poverty. However, she uses these views to build a sense of international subjectivity among the labouring classes, as well as a larger criticism of the way that factories are run and the way that philanthropy is distributed by England’s wealthy in times of need. Sebastian, as a Radical factory owner, is quick to assist his workers through food rations, rent subsidies and the setting up of schools that teach a variety of useful skills for both children and adults. For this, he comes under severe criticism by other Lancashire factory owners, reminding us that he is the exception to the rule, and that the textile industry is as exploitative at home as it is abroad. Fothergill’s homogenous views on the war and slavery assist her in mapping a global landscape of exploitation that is in fact assisted by her retrospective writing point.

Information on Fothergill is relatively limited in comparison to the heavy-hitters of the nineteenth century, such as Elizabeth Gaskell and the Brontës. There is, however, one source that provides biographical details in Helen C. Black’s 1893 text Notable Women Writers. Black outlines a meeting that she had with Fothergill, in which she discusses how she does not care for classic notions of luxury; “sumptuous rooms, gorgeous furniture, and an accumulation of ‘the pride of life’ and ‘the lust of the eye’ would simply oppress me, and make me feel very uncomfortable.”[6] Black outlines her family background and how her early life had been impacted by the cotton industry: Fothergill’s father spent his early career in Rochdale learning the trade, before setting up with a partner in Manchester. After his death, however, her family became ‘much reduced in circumstances’[7] and went to live in a house next to a cotton mill in an ‘out-of-the-way part of Lancashire’ in which her father and his business partner had previously had an interest.[8] Although the cotton trade impacted her in a personal sense, and not an international one, her interest in how conditions can be improved for those living in Lancashire’s textile communities is contextualised with this information.

A growth in interest in the literary responses to the Cotton Famine is certainly evident in recent years, particularly in the poetry of the period. This archival and academic work provides an analysis of how industrial communities reacted to their place within global systems of trade in a personal capacity, as well as revealing a history of international worker solidarity in some writers’ positions on slavery abolition and race relations. The next viable step is to look for similar literary responses in novels that also centre on this short but impactful period of history, with Fothergill’s Probation being a prime example.

Jessica White (@jessf_white) is a PhD student at University of Liverpool, researching representations of the textile industry in nineteenth-century literature. She is a culture writer focusing on costume and books; her work has featured in i-D, Dazed, The Face, The Irish Times and on BBC Sounds.