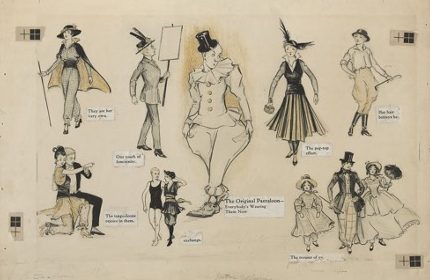 In “‘Rational’ Dress”, a cartoon published in the 6 June 1883 edition of Judy, or the London Serio-comic Journal, Marie Duval (1847-90) parodies the rational dress movement, which strived for improvements in women’s clothing, through a series of individual figures (fig. 1). The figures, or ‘characters’, represent various ways in which rational dress has influenced fashion trends and women’s place in society. Printed underneath are captions pertaining to each character on the page or ‘stage.’ Everyone has a unique ‘role’ to play. A strikingly similar cartoon was published over thirty years later in the 25 October 1914 edition of the American Evening Star Sunday Magazine. “Panta-loons” by Jessie Gillespie (Willing) (1888-1972) also features a series of characters with captions. The harlequinade Pantaloon, the origin of the name of the trousers, is front and centre.

How do Duval and Gillespie’s cartoons reflect on place (Britain and the United States) and time (the fin de siècle and the years leading up to World War I) in relation to rational dress? What do these two cartoons, created by women who themselves would have sought equality and professionalism, add to the conversation surrounding rational dress? Duval and Gillespie would have both faced gender bias and societal expectations as they pursued opportunities in the commercial art marketplace. Although the two cartoons appear to lampoon rational dress, Duval and Gillespie were not necessarily antifeminist or averse to women’s rights. Rather, these two strikingly similar cartoons only highlight the complicated story of rational dress and women artists in late nineteenth and early twentieth century Britain and the United States.

A History of Rational Dress

In the 1850s, donning the bloomer costume, named after American women’s rights advocate Amelia Bloomer, became one of the first attempts by Western women to wear trousers in public.[1] The costume was criticised through text and cartoons in the American and British press due to concerns that ‘Bloomers’ would encourage women to transgress their traditional gender role.[2] As rational dress gained traction in the 1880s, a new feminist type arose: the New Woman. In the United States, the New Woman and rational dress was associated with illustrator Charles Dana Gibson’s Gibson Girl, a popular and positive depiction of the New Woman who wore the modern shirtwaist.[3] However, the New Woman and her relationship to rational dress was also linked to the idea of the manly woman. Mary W. Blanchard notes that the manly woman wore trousers while flaunting her role of wife and mother.[4] Not only did the manly woman subvert conventional gender roles, but she also challenged the very notion of womanhood.[5]

Overall, the New Woman was approached differently in Britain and the United States. As Patricia Marks argues, the British press viewed the New Woman as threatening, while American periodicals such as Life regarded her with more humour, perhaps due to the country’s democratic origins.[6] Duval and Gillespie would have been keenly aware of these trends in the press. As commercial illustrators, both women competed in a crowded market with men. Maria Quirk points out that women illustrators took advantage of their ‘perceived affinity for sentimentality.’[7] Their commissions tended to reflect this, as many women illustrated works for children. However, Duval and Gillespie not only engaged with the more masculine forum of the press, but worked within the masculine genre of humour, making their careers as illustrators particularly unique.

In addition to her position at Judy, Duval was an actress.[8] She herself wore trousers on stage, garnering a reputation for playing cross-dressing roles.[9] Judy, named after its fictional woman editor, was most likely aimed at both men and women, although the magazine’s views tended to be conservative.[10] Duval would have created cartoons that matched Judy’s political views.[11] Furthermore, in the 1880s the New Woman was routinely lampooned in the British press. However, Duval would have most likely personally been a supporter of women’s rights and rational dress. On several occasions, her cartoons critique the use of crinolines and corsets (fig. 3). The rational dress movement readily criticised undergarments such as crinolines and corsets due to their risk to women’s bodies and health.[12] In ““Rational” Dress,” Duval does include less comical characters, such as the elegant woman positioned at the bottom far left. Featuring these characters could have been a way for Duval to ‘spoof’ rational dress while attempting to show more traditional roles that women could play that still pushed against the boundaries of gender.

Little is known about Gillespie’s life, although she established a reputation in the field as a silhouette artist.[13] While the inclusion of the harlequinade Pantaloon in “Panta-loons” suggests satire, the characters surrounding this figure are not mocking, but rather smartly dressed, and the roles they play are vastly improved compared to Duval’s cartoon. Gillespie also continued to depict fashionable New Women in other illustrations. In “Desperation, Inspiration, Anticipation, Realization,” published in the 3 March 1915 edition of Life, Gillespie shows a savvy New Woman’s transformation in four silhouettes through dress, highlighting the importance of clothing in one’s identity (fig. 4). Gillespie’s illustrations were published in American periodicals and, as Marks contends, the New Woman tended to be portrayed in a more positive light in the United States. As the twentieth century progressed and women’s roles outside the home continued to expand, rational dress only became more acceptable.[14] Women wore trousers throughout World War I and the Roaring Twenties would see a push for even more androgynous fashions.[15]

Although Duval and Gillespie’s cartoons at first glance seem to be parodying rational dress, I argue that both women are linking gender with the act of performance. Each cartoon depicts various ‘characters’ playing individual ‘roles’ arranged in a way that could represent a ‘stage.’ As Simon Grennan, Roger Sabin, and Julian Waite assert throughout their work on Duval, her career as an actress influenced her drawing style, and performance was a large aspect of her cartooning. Gillespie perhaps also had an interest in the visual aspects of the theatre through her use of silhouettes and reference to the harlequinade. Although Judith Butler’s Gender Trouble: Feminism and the Subversion of Identity (1990) was not published for several decades, Duval and Gillespie would have been keenly aware of the conflict in the gender role they were expected to perform as professional women artists striving to participate in the public sphere of the commercial art marketplace.

Michelle Reynolds (@lovelymydear) is a PhD student at the University of Exeter. Her thesis looks at the relationship between the New Woman’s emergence and the professionalism of women illustrators at the British fin de siècle as well as the New Woman’s visual representation and how women illustrators contributed to this representation. More broadly, her research interests include art and literature of the long nineteenth century, women artists, gender and sexuality, print and exhibition culture, photography, and fashion. She is currently a Postgraduate Representative for the University of Exeter’s Centre for Victorian Studies and a Board Member for the journal Romance, Revolution and Reform based at the University of Southampton.

[3] Holy Pyne Connor, “Not at Home: The Nineteenth-Century New Woman,” In Off the Pedestal: New Women in the Art of Homer, Chase, and Sargent, ed. by Holly Pyne Connor (New Brunswick: Rutgers University Press, 2006), 4-6.