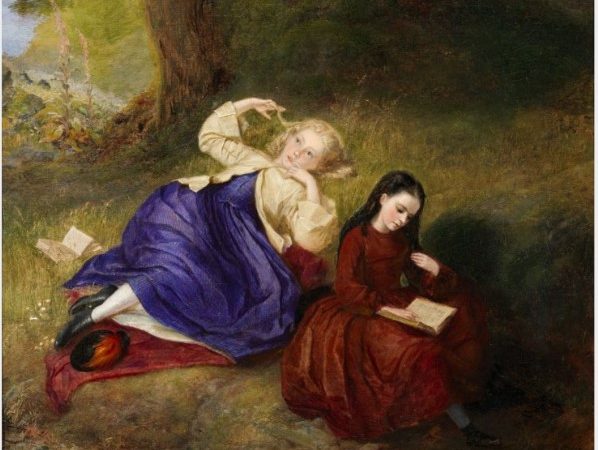 The current pandemic triggered what appears to be a reading revival. As I noted media discourse on people accumulating books, I wondered whether sometimes these books were companions to a daydream, as individuals imagined an alternative present or felicitous future; experiencing, as Charlotte Bronte expressed it in Villette, “the life of thought, and that of reality”.[1]

Researching fictional experiences of reading in women’s writing at the fin de siècle, I notice a book is often accompaniment to a daydream. It is dropped, thrown, placed, or graced with a hand that holds it lightly. In the Victorian period, as now, “novels prompt[ed] readers to daydream about their own lives”.[2] Interchangeable with reverie during the Victorian era, daydreaming defies a singular definition. For now, I borrow the succinct description of Jerome Singer, eminent daydream believer, who describes it as “private experiences in the form of interior monologues and visual images”.[3] Connecting a book to daydreaming invites non-reading as well as reading or simply the inference of reading.

The novel Christy Carew (1880), by lesser-known Irish writer May Laffan,[4] features protagonist Christy Carew, a daydreamer whose bouts of being busy “with her own thoughts” [5] are frequently interrupted. Catholic, middle-class Christy has finished school in Dublin at eighteen years old and is teetering on the edge of courtship and marriage. At this point in the text, she is feeling agitated and has removed to her room to be alone. Having “let herself fall back in her chair”, and “abandoned” herself (both actions so unconstrained!) to a daydream, she is interrupted by Hannah, the children’s nurse: “You’re looking dull, Miss Christy.”

Christy’s “looking dull” is perceived as symptomatic of both daydreaming and inappropriate reading deemed undesirable to a segment of Victorian society extolling perky participation in progress, and prepares the reader for a conventional view of Christy’s state:

‘Reading too much?’ repeated the young Lady […]

‘You could do nothin worse than readin a priest tol’ me — ’tis a sin — unless it is thinkin’; an’ I see you thinkin’ constant, Miss Christy. An’ don you know thinkin is able to damn you.’

‘Thinking?’ Miss Carew stopped the needle and looked up.

Christy understands the “delights of reading” and is described as having a “natural love of reading”. Through the story are priests who read, collect, and love books. Father Considine views books as “the most precious gifts God has given us”; his “love of books” is perceived by others as “an extravagance”, and his collection earns him the label of bibliomaniac. Hannah and her source have condemned reading as leading to sin and damnation, a stance suggestive of Quakerism which in Ireland had established “missioner[s] . . . down the country”.[6] Quaker journal The Friend[7](1882-4) for example, presents warnings under headings such as Hurtful Reading; Evil Literature; Leave the Book Alone; and A Gigantic Danger. Christy’s exclamation, “Reading too much?” suggests incredulity at the idea, aware as she is that reading is acceptable for bookish priests and intrinsic to the “suitable and thorough”[8] convent education she received. Catholic journals, such as The Irish Quarterly Review[9] and The Irish Monthly, were more subtle in warning readers of the perils of reading, juxtaposing agreeable reading with unfit reading and often recommended reading material including specific novels.[10] Be it damning or befitting, the problem lay with reading leading to thinking. Even in the absence of a book, as in Christy’s case, this viewpoint is implied.

Hannah discovered Christy daydreaming. A conflicted site of study during the Victorian period, opinion on daydreaming stretched from diagnosis as a disease to a frivolous foray into fantasy. It was perceived as a cover for idleness, thus a waste of time, or even a precarious route to delinquency. Consequences of daydreaming were usually gendered; for men it improved their intelligence, whereas women, being “precariously emotional”[11] and therefore lacking control, became insane. In contrast to the scientific perspective, daydreaming within the discourse of Romanticism was viewed as productive and creative;[12] Byron and Shelley daydreamed, and we know their creative output. Arriving at the fin de siècle, daydreaming shifted from purposeless drifting and wayward wandering to potentially productive consciousness. Rather than a flight of fancy, it was considered time well spent in constructive rumination. Hannah allies daydreaming with “thinkin’ constant”. Hannah’s comments and Christy’s responses are on the cusp of this revised opinion, hinting at both established and progressive ideas.

Daydream dismay was rooted in not knowing what an individual was thinking or perhaps concocting. Ungoverned, daydreaming was a space of one’s own – ‘me time’, if you like – which allowed for analysis of self and society. Such thinking, it was believed, led to disruptive actions and the potential dismantling of a seemingly stable society.[13] Christy is advised by an acquaintance, Mr Sugrue, not to allow “strange ideas a place in your thoughts. Depend on it, sooner or later, the images we keep before our mind’s eye end in actual deed”. Christy’s subsequent grievances lie in the realisation men’s reading practice initiates “something to do” whereas for women “there’s nothing to come of it”. As a prize-winning student, she could not see how to expend her talents, frustratingly exclaiming, “What is there ever for any girl like me to do”? During the 1880s in Ireland, Christy’s responses are addressed as women emerge who champion the importance of career opportunities and educational advancement for women.[14]

Additionally, Christy’s daydreams are, I suggest, a small rebellion, an opportunity for personal autonomy in response to societal construct of control and order. Christy “chose” to “spend hours” in daydreams. Rather than attend a dinner party, she “fancied that to sit . . . and muse for hours would be enjoyment enough”. During such musings, Christy would “[dispatch] her attention abroad on more congenial excursions” such as “Spain, to watch the building of some favourite chateau she possessed there”, a notion likely rooted in a book. The travel of thoughts beyond her domain of reality to dreaming of literally building an alternative life, speaks to the spirit of fin de siècle desire for the ‘new’, which was soon to infiltrate societal narrative.

Attempting to divert Christy’s daydreaming disposition, the aforementioned Mr Sugrue outlines an alternative. Contemplating this grounded advice, Christy decides to teach, albeit in a circumscribed manner, in Sunday school. Unperturbed by the potential enacting of a dodgy “actual deed”, Christy continues with her daydreaming. As dreaded by ruling hierarchies, her reading and thinking ignite considerations and conclusions which scrutinise core Victorian precepts and Catholic constrictions, leading to a dissatisfaction with the established structures and defined roles for women. Disheartened, she concludes, “it is only men and birds that can go where they like”.

…which has got me thinking…

Colleen Ballard (@cballard_biblio) is a doctoral candidate at the University of Limerick, Ireland. She is currently researching the reading experience in fiction of women writers at the fin de siècle. She enjoys teaching literature including Augustan, Romantic, Victorian, and Modernist texts. Her passion for books led to an MA in Library Studies. She derives much pleasure from a beautiful book cover, and has an unwavering interest in material culture and heritage.

[3] Singer, Jerome L. “Daydreaming and the Stream of Thought: Daydreams Have Usually Been Associated with Idleness and Inattentiveness. Now, However, through an Empirical Research Program, Their General Function and Adaptive Possibilities Are Being Elucidated.” American Scientist, vol. 62, no. 4, 1974, pp. 417–425.

[5] All quotes from primary text throughout: Laffan, May. Christy Carew. 1880.

[9] Journal of the Jesuits, a religious order of the Catholic Church.

[13] Gettelman, Debra. “‘Those Who Idle Over Novels’: Victorian Critics and Post-Romantic Readers.”  In: Adelene Buckland, A., Palmer, B. (eds)  A Return to the Common Reader, 2012. Ashgate.

[14] In Ireland, opportunities for Higher Education were limited for young Catholic women until the introduction of university classes in 1885 at the Dominican College, Dublin, followed by the opening of the first college for Catholic women, St Mary’s University College, Dublin in 1893. See Kealy, Máire M. Dominican Education in Ireland, 1820-1930. Irish Academic Press, 2007.