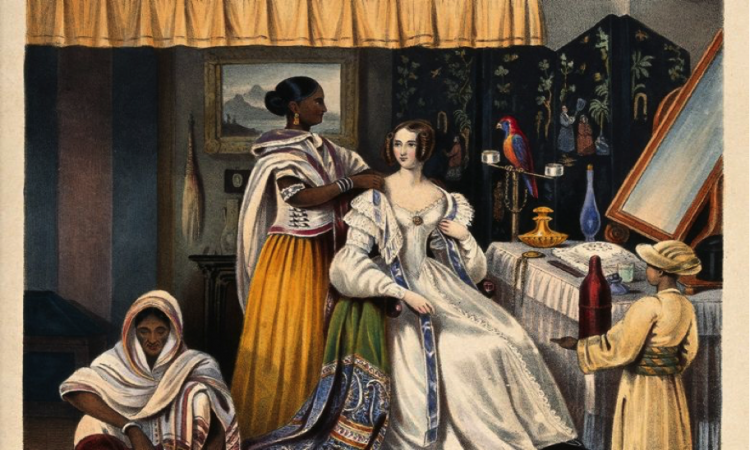 ‘We have had so many inquiries respecting Indian outfits, and necessary articles of dress for the Presidencies…’ (The Englishwoman’s Conversazione, Englishwoman’s Domestic Magazine, 1 July 1869).

Britain’s imperial control and power over India had reached its epitome in the nineteenth century, as the East India Company had become entrenched, and later, the colonial society was consolidated by the imposition of Crown Rule in 1858. The nineteenth century, especially the second half, witnessed many British women crossing the seas to reside in India with their husbands, brothers, or friends. The memsahibs, as they were referred to, had to undergo a huge transition in moving from Britain to set up a home in India. Many factors went into their process of adapting to life in British India. One significant aspect was the ponderous question of British women’s fashion and clothing, and the way they designed their toilettes and sartorial choices to adapt to life in the colony. What kind of fashion and clothing did Englishwomen wear in the Indian colony and what went into their sartorial upkeep? This article looks at British women’s toilettes in Victorian India and traces through these their relationship with the Indian servants who helped with their sartorial upkeep. Naturally, the domestic servants that they employed were among the first Indian people that they interacted with. A point that warrants attention is how these women’s very wardrobes in India became one of the many significant points of contact between the memsahibs and Indian people – particularly a select few of the many servants that were employed in an ‘Anglo-Indian’ home.[1]

The increased travel to reside in India resulted in the production of myriad guidebooks and advice manuals about the journey to the colony and adapting to life as a resident there. Women, especially, were directly advised about specific things like housekeeping, servants, interior decoration, and fashion in the colony. It is noticeable when looking into the archives that British women’s sartorial choices in the colony were determined more by their adaptability to the hot climes of India than on the basis of current fashions at home. As noted by Flora Annie Steel and Grace Gardiner in their popular book for British homemakers in India, The Complete Indian Housekeeper and Cook (1886)[2], in a chapter titled ‘Hints on Outfits’:

There can be no doubt, however, that where the climate ranges between such extremes of cold and heat, as it does in many parts of India, it becomes necessary to yield to it in the matter of dress unless fashion is to be set before health and comfort.[3]

Several of these guidebooks and advice manuals, such as The Complete Indian Housekeeper and Cook, Indian Outfits and Establishments (fig.1), The Englishwoman in India (fig.1) and others, provided chapters entirely dedicated to elements such as fashionability and clothing recommendations for women living in India.[4] They meted out advice on dressing properly whilst also keeping discomfort at bay in the extreme temperatures that affected the varying regions of India across different seasons. Victorian fashion magazines like The Englishwoman’s Domestic Magazine (EDM), Myra’s Journal of Dress and Fashion, and The Ladies’ Treasury often featured questions, conversations, and advisory articles on topics related to fashion and the transporting of clothing and accessories abroad for women travelling to India. EDM did a series of three special articles across three different issues titled ‘On Indian Outfits’ in 1878.[5] One factor that dominates all the advice given is the inclusion of a lot of lightweight fabrics and lighter dressing items in the toilettes, both for dresses and underclothing. The fabrics popularly advised were soft-washing silks, silk flannel, pongee silks, linen, cashmere and vicuna for cold season, and items like nuns-veiling nightgowns, mousseline de laine (a light woollen fabric) tea gowns, a necessary ball gown and an essential black silk dress. Other unmissable outfits always suggested were for the ritualistic tennis parties popular in Anglo-Indian society, and a good riding habit, preferably of moderately thick cloth to stand the wind.

‘With regard to dress, it is best not to take out too many dresses made up…’, writes E.J. in EDM, advocating women to carry a large supply of haberdashery and work materials for unmade dresses. The inclusion of unmade dress materials, to be designed and tailored in India, was another popular piece of advice so as to avoid any damage that could be caused by the sea voyage.

A lot of articles and fabrics were also available in the so-called ‘Europe Shops’ that housed enough material to help the Englishwoman style her toilettes according to latest fashions, in accordance with the climate.[6] Over the years, accessing materials for creating outfits in the latest fashions became easier in India with the presence of these shops – as seen in ‘Myra’s Answers on Dress and Fashion’: ‘Bombay – It is no longer necessary to provide Indian outfits on a very extensive scale; shopping is almost as easy and cheap in Calcutta as it is in London…’ (Myra’s Journal of Dress and Fashion, 1 Jan 1893)

Articles often drew up well-researched lists of clothing, fashionable as well as suitable to the climes, to ease women’s job of packing, as one such elaborate list from EDM demonstrates:

With regards to caring for these clothes, amongst the numerous servants in an Anglo-Indian home, more than two to three were appointed specially to look after their masters’ clothing and toilettes, or had it as one of their primary jobs. Fig. 2 shows Fanny Parks’ list of servants in an Anglo-Indian home, as given in her travelogue – the dhobee (washerman), istree wala (ironing man), darzee (tailor), second tailor, and also the ayah (nos. 8 to 12), all contributed to designing or looking after the mistress’s clothes.[7]

The ayah had care of her mistress’s wardrobe, her jewellery, dresses, and hairstyles and was often viewed as a lady’s maid. All the advice columns or articles in magazines mentioned above made at least one passing comment in reference to the darzees or tailors in India, who were either praised or criticised for their designing and handling of the European fabrics and fashions. The unmade dresses brought to India were often put into the hands of these tailors to design and create as per British fashions and styles. E.J., for example, in EDM, writing about designing dresses in India, notes:

The Indian tailors (darzees) are a very intelligent race, work well, and will make any garment you like if they have a pattern, but they have no powers of origination. (EDM, 1 Mar 1878)

Steel and Gardiner, on the other hand, found the tailors to be very ‘bad darners’ and the dhobis (washermen) to be ‘relentless’ in laundering underclothing, thus recommending fewer frills and buttons on clothing items. They also warn of the washermen’s ‘fatal facility for washing out even ingrain colours’ in advising women to pick daintier tones for their tennis outfits.[8] Such an immanent presence of references to Indian servants regarding their own dresses and outfits reveals the extent to which British women’s sartorial lives in India depended on their servants as much as on the weather. Perhaps one of the most significant examples of this memsahib-fashions-servants connection was established through the ayah whom the writer of Englishwomen In India described as ‘generally a finished lady’s maid’.[9]

Several Englishwomen complained about the different habits of their servants, especially ayahs. Emma Roberts, in her travelogue, specifically criticises the ayah for her handling of English fashions:

Few ayahs are at the slightest pains to make themselves acquainted with the mysteries of the European toilette, they dress their ladies all awry… they have no notion of lacing, buttoning, hook-and-eyeing… Folding up dresses is an art wholly unknown, and Griselda herself would find it difficult to keep her temper in the midst of crushed flounces, broken feathers…[10]

Roberts expresses her discontent without accounting for the ayah’s unfamiliarity with what are to her – the ayah – essentially alien fashions and concepts.

Such instances help explore British women’s relationship with a faction of their Indian servants through their upkeep of the women’s toilettes. It also charts out how the unequal power relations played out across race and class, between coloniser and colonised. Studying British women’s sartorial lives in India, and the way they associated with the servants through it, serves as one amongst the many ways in which we can understand Indira Ghose’s description of British women in India as ‘colonized by gender, but colonizers by race’.[11]

Tarini Bhamburkar is a second-year PhD candidate at the University of Bristol, UK. Her thesis focuses on British and Indian women’s writings and feminisms from nineteenth century British India involving the archival research of women’s periodicals, novels, albums, and travelogues from Victorian Britain and India. Her core interest lies in understanding the way Indian women and British women represented each other in their writings in the nineteenth century colonial period, and their cross-cultural, transnational relationship in an imperialist set-up. She has recently received a grant from the Pasold Research Fund to carry out research on the politics of women’s dress and clothing histories in the literature of colonial India.

[1] In colonial India, the term ‘Anglo-Indian’ was used to refer to British people who lived in India.

[4] Indian Outfits & Establishments: Practical Guide for Persons to Reside in India: Detailing the Articles which should be taken out, and the Requirements of Home Life and Management there, By an Anglo-Indian, (London: J. Upcott Gill, 1882); The Englishwoman in India, By a Lady Resident, (London: Smith, Elder & Co., 1864).

[6] A lot of shops in the more urban regions like Calcutta or Bombay became very well-equipped in stocking European goods, including dress and accessories in late Victorian India and were sometimes referred to as ‘Europe Shops’. To name some: Army & Navy Stores; Hall & Anderson; Simpsons & Co.; Whiteaway, Laidlaw & Co. (which Steel and Gardiner mention in their book).

[7] Fanny Parks, Wanderings of a Pilgrim in the Search of the Picturesque, During Four-and-Twenty Years in the East; With Revelations of Life in the Zenana, vol. 1, (London: Pelham Richardson, 1850), p. 209.