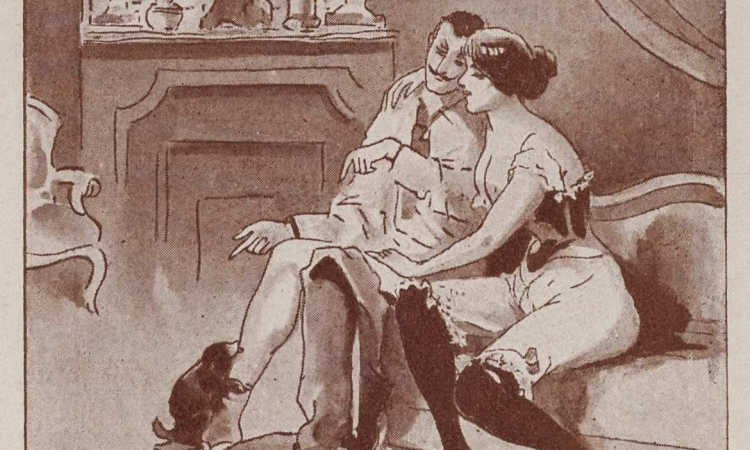 There was a young widow of Nain

Who the bedclothes did frequently stain,

With such great inflammation

Her cunt so long idle had lain.[1]

The Victorians weren’t prudes. I’ve always known that. As a Victorianist, this misconception is one that I am constantly debunking for students, colleagues in other disciplines, and any of my friends and family who are willing to listen to me talk enthusiastically about Victorian sexuality over dinner. Even I hadn’t realized, though, the extent to which the Victorians have been misjudged as prudes until I first encountered Victorian pornography. As part of my dissertation research on the impact of garden settings in long nineteenth-century British novels, I read the ever-so-creatively titled The Romance of Lust (1873-76), a pornographic novel that follows the exploits of Charles Roberts through four volumes of increasingly kinky sex. Again, even though I knew that the Victorians talked about sex—and, obviously, engaged in sex, or I wouldn’t be here writing this—it still took me a bit by surprise to read the word “cunt” in print in a nineteenth-century text for the first time.

Many scholars have noted that Victorian pornography is rife with humour,[7] with some suggesting that the funnier parts of pornography declined throughout the nineteenth century.[8] As far as I know, though, this is the first time that anyone has explored the impact of that humour on specific topics, such as menstruation. Included in the “Nursery Rhymes” section of the pornographic miscellany Cythera’s Hymnal; or, Flakes from the Foreskin (1870), the limerick that opens this essay explicitly and humorously depicts the very real side effects of menstruation, including stained bed linens. As was common in Victorian texts, both pornographic and non-pornographic, this limerick also perpetuates some menstrual myths, such as menstruation being heavier due to a lack of sexual activity. “There was a young widow of Nain” may be only one limerick of many in the collection, but it does not veil or cloak menstruation; menstrual blood is not merely implied or hinted at—the limerick unabashedly discusses a menstruating woman with the same candor that other limericks in the collection discuss content such as sex and excrement. Even though many scholars have suggested that menstruation is one of the ultimate taboos,[9] Victorian pornography overcame that taboo through humour in its menstrual poetry.

Comprising even more menstrual myths is “The Signs of the Zodiac” from Records of the Most Ancient and Puissant Order of the Beggar’s Benison and Merryland, Anstruther (1892), another pornographic miscellany. Opening with a call to readers to “Come listen well the while I tell / A tale that full of sense is, / ‘Tis all about the Zodiac, / In other words—the menses,”[10] this poem consists of a set of guidelines for sexual partners of people who menstruate. The poem notes, for instance, “In April, fools neglect their tools / When ladies most adore us / And yield their hearts to counterparts / Beneath the sign of Taurus.”[11] Following this structure of one stanza per Zodiac sign, the poem continues to offer largely superstitious advice, such as June being the likeliest month in which to contract a sexually transmitted infection: “June is the month codlings to catch— / Look out for bait, you forager; / For crabs infest the cuckoo’s nest, / Beneath the sign of Cancer.”[12] Less explicitly menstrual than “There was a young widow of Nain,” “The Signs of the Zodiac” still frames its entire fourteen stanzas as all addressing menstruation. What is, in its essence, a funny sex advice poem, names menstruation as inherent to sex, and, by extension, implies that menstruation then runs throughout all of Victorian pornography. The poem’s chorus, “Ri fol de riddle / Ri fol de wack / Regulate your Loves, by / The Signs of the Zodiac” both adds to the humour, because sex advice is seldom sung, and speaks to the importance of noting menstrual cycles for sexual partners, presumably to manage pregnancy in addition to desire and arousal.[13]

In what is perhaps the most amusing pornographic period poem that I’ve encountered, a woman accidentally menstruates on a man’s white pants and then tries to play it off as a red ink stain. The aptly named poem “The Summer Ride”[14] is featured in The Story of a Dildoe (1891) and narrates the experience of a young woman who needs to get home from an event, but all of the carriages for hire are full. A young man offers her a spot in his carriage, on his lap, and she accepts because she is in a hurry. (I’m sure you can see where this is going.) Eventually, everyone leaves the carriage except for our two protagonists:

Then she said, “Now, Monsieur,

There is room enough here,

For me to sit off of your knee.”

From his knee did she slide,

And sat down by his side,

But oh, what a sight did he see!

On his holiday trousers,

As white as the snow, Sirs,

He saw a red patch where she’d sat;

He could not help saying,

“That’s a nice trick to be playing.

What the deuce do you mean Miss, by that?”

But she framed and excuse quick and witty;

“In a phial in my pocket,

The coach gave such a shock, it

Of course, because this is a pornographic narrative within a pornographic narrative, the man then becomes erect and takes out his penis to initiate sex with the woman. What is notable here is not the sex, because pornography is full of sex, but the clear mark of menstruation and the woman’s immediate humorous treatment of the incident. Despite the incident being “an awful disgrace,” the woman comes up with an “excuse quick and witty,” and her flippant “what a pity” reiterates the humour inherent in this menstrual moment. Bleeding all over a man’s white trousers after he compels you to sit on his lap, only to walk away with an “oops, must’ve been ink” is an excellent joke, and one that I think would go over well with today’s audiences too. “The Summer Ride” may not explicitly refer to menstruation or menses as the two other poems do, but the menstrual content is certainly not disguised or avoided. Menstruation serves as the foundational premise of the humour in this poem, centering periods in this piece of pornography.

Janice Niemann (@NiemannJanice) is a PhD candidate in English at the University of Victoria, working on garden settings in 19th-century British fiction. Her dissertation explores how novelists use gardens to facilitate social deviance and subvert generic conventions.  Her research interests also include sexuality studies and compassionate pedagogy.

Header image: ‘The Harmless Pussy.’ The Cabinet of Venus, etc. [An anthology. With plates.]. Erotica-Bibliomaniac Society, 1896. Archives of Sexuality and Gender. Accessed 25 Oct. 2021.

[1] Cythera’s Hymnal; or, Flakes from the Foreskin: A Collection of Songs, Poems, Nursery Rhymes, Quiddities, Etc., Etc. Oxford: printed at the University Press for the Society for Promoting Useful Knowledge, 1870, p. 74.

[3] I haven’t been able to find an open access version of Lovely Nights, but, if you have access to Gale’s Archives of Sexuality & Gender, you can find the text there.

[8] Walter Kendrick, The Secret Museum: Pornography in Modern Culture, Viking, 1987, p. 42; for an excellent discussion of how pornographic language evolved throughout nineteenth-century Britain, see also Sigel, “Name Your Pleasure: The Transformation of Sexual Language in Nineteenth-Century British Pornography,” Journal of the History of Sexuality, vol. 9, no. 4, 2000, pp. 395-419, https://www.jstor.org/stable/3704910.

[10] Supplement to the Historical Portion of the “Records of the Most Ancient and Puissant Order of the Beggar’s Benison and Merryland, Anstruther.” Anstruther, 1892, p. 68.

[14] “Ride” is a slang term for having sex with something.