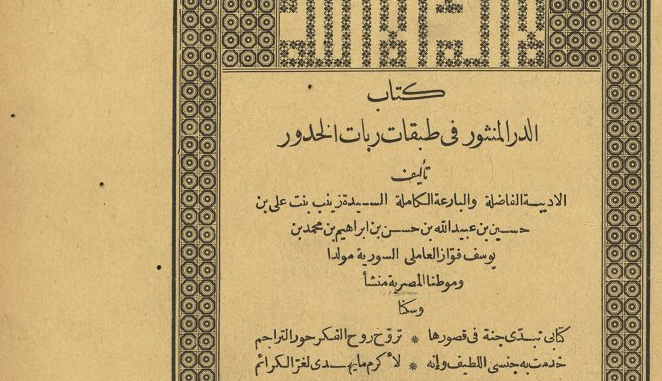 Writing a comparative PhD thesis on the New Woman in Britain and the Arab world at the fin de siècle entailed establishing similarities and differences in language usage in the early feminist movements in both cultural contexts. Considering that the New Woman is a well-established field of study in Western scholarship, the main focus of my research project was to demonstrate that, contrary to the assumptions made in existing literature – that the New Woman appeared in Arabic from the 1950s onwards – the fin de siècle and early twentieth century witnessed heated debates on the New Woman in what came to be known as the Middle East, and especially the region of Greater Syria and Egypt. The rise of Arabic feminist writing and activism coincided with the Nahda movement, also known as the Arabic renaissance. The latter grew rapidly and was promoted by both Muslim and Christian Arabs. Abdallah Laroui defines the Arab Nahda as:

A vast political and cultural movement that dominated the period of 1850 to 1914. Originating in Syria and flowering in Egypt, the Nahdah sought, through translation and vulgarisation, to assimilate the great achievements of modern European civilisation, while reviving the classical Arab culture that antedates the centuries of decadence and foreign domination. (vii)

Although Laroui emphasises the influence of Western civilisation on the Nahda, many critics like Nawar Al-Hassan Golley and Abdulrazzak Patel argue for the indigenous origins of the movement.

Through applying a comparative approach in my research project, I have noticed a fascination with the ‘new’ as opposed to old traditions in the work of early Arab feminists. This was also a tendency in fin-de-siècle writing in Britain. Women, in particular, sought social reform in order to improve the conditions in which they lived in both societies. Middle-class women were concerned with navigating the tide of progressive thought and finding their place in the public sphere, as opposed to the practice of seclusion that previously kept them in the private sphere: the home. The Victorian ‘Angel in the House’ and the Arab ‘Harem’ were both concepts that aimed to achieve the seclusion of a certain class of women and restrict their right to venture into the public sphere. By the 1880s, women started expressing their awareness of a sharp gender gap between them and men and endeavoured to create new identities for themselves.

Linguistically speaking, I have approached my translation of the language of feminism in Arabic with caution. Reading articles that were originally published in the Arabic press at the fin de siècle and early twentieth century has contributed immensely to my translation methodology by familiarising me with the debates, topics and language prevalent among Arab writers at the time. Expressions like “huquq al-mara’” (“women’s rights”), “al-musawat bayna al-mara’ wa al-rajul” (“equality between women and men”), “isti’bad al-mara’” (“subjection of women”) and “haq al-intikhab” (“suffrage”/ “the right to vote”) are employed by both proponents and opponents of women’s rights. A particularly heated debate took place in Al-Hilal (The Crescent) periodical on whether women should have equal rights with men. One of the articles was published in issue 20 on June 15, 1894 and written by Dr Amin Khoury, who provides lengthy explanations ranging from biology to philosophy to prove women’s inferiority to men. Interestingly, he opposes earlier Arabic writings that explore philosophical approaches to, and definitions of, human rights and restricts the application of those in the case of women’s rights. Khoury’s scathing views were later opposed by Zaynab Fawwaz, who goes through his arguments and refutes them with scientific facts and sound reasoning. The language used by both sides of the debate reflects the authors’ awareness of scientific and medical developments of the nineteenth century. Fawwaz, in particular, explores the biology of women and how wrong it is to imply that women’s biology makes them less mentally or physically capable than men. She writes about “al-haml” (“pregnancy”), “sin al-ya’s” (“menopause”) and “alam al-haydh” (“menstruation pain”) and explains that these are natural states that women experience and do not translate to the inferiority of women’s biology.

In a short article from December 8, 1892, in the 277 issue of Al-Nil (The Nile) newspaper, Fawwaz approaches the topic of love and the psychological suffering that results from the social conventions that repress any expression of love, even when it is devoid of sensuality. She also uses terms like “an-naw’ al-bashari” (“human species”) and “al-hayat al-nafsaniyya” (“psychological life”). Throughout her writing, she discusses “al-idara al-manziliyya” and “tadbir al-manzil” [singular] or “tadbir al-manazil” [plural] (“home management”). In issue 1402 of Lisan al-Hal (The Mouthpiece) newspaper (April 27, 1892), for instance, Fawwaz mentions “al-khibra bifan tadbir al-manzil” (“knowledge of the art of home management”) and “al-iqtisad fi ma’shatiha” (“women’s knowledge of household economy”) among other factors that contribute to women’s ability to lead fulfilling lives. In her biographies, she cites John Stuart Mill’s On Liberty (1859) and the concept of “huriyya shakhsiyya” (“personal freedom”). The general debates, and especially the views expressed in men’s writing, frequently refer to pseudo-scientific knowledge from anatomy to biology and medicine to justify their attacks on women’s rights, like the aforementioned article by Dr Khoury. This awareness of the cultural and linguistic conventions of the second half of the nineteenth and early twentieth centuries was instrumental to my approach to translating pioneering Arabic narrative fiction and non-fiction writing.

Regarding specific strategies of translation, I include transliteration where the author uses foreign words in the text. An example of this is Isa Ubayd’s use of “neurasthenia” in “Ihsan Hanim” (“Lady Ihsan”, 1921), where he writes the word in Arabic with inverted commas, a stylistic choice that I keep in translation as well. Because the word is unfamiliar in Arabic, I was only able to figure out that it refers to the condition of neurasthenia through contextual clues, including Ubayd’s description of it as “a contemporary disease” and the symptoms that match those mentioned in fin-de-siècle writing in Britain.

In my translation of words and expressions related to psychological matters, I have relied on contextual clues to determine whether the author was aware of the developments in the fields of psychiatry and medicine at the time of writing. As such, I have, for instance, translated the word “bimaristan” in Labiba Hashim’s Al-Ghada al-injiliziyya (The English Maiden) as “lunatic asylum”, although “bimaristan”, in Islamic history, was used for institutions where people went to recover from physical illnesses and where people with mental troubles were hospitalised as well. This choice in translation reflects the original Arabic text, where Hashim uses the expression ma’wa al-majaneen which literally translates to “lunatic asylum”. The word “bimaristan” is used when a physician plots to fake a medical report of a character’s insanity, so he can admit him into a mental facility and deprive him of his inheritance. Due to similarities to British fin-de-siècle narrative fiction and relevance to New Woman writing, I used the term “lunatic asylum”.

All in all, studying and translating Arabic fiction and non-fiction texts and comparing them to fin-de-siècle British writings gave rise to similarities and differences in the linguistic usage of feminist terms and concepts and showed that Arab feminism had both indigenous and outsider influences since its early days.

Asma Char is an early career researcher who was awarded her PhD degree in English from the University of Exeter. Her doctoral thesis is a comparative study of early feminism in the Arab world and Britain and focuses on the New Woman phenomenon at the fin de siècle. Her research interests include the long nineteenth century, the New Woman, narrative fiction, Arabic Nahda, cultural histories and translation. She has worked with the organising committees for different conferences and academic events in the UK and beyond.

Laroui, Abdallah. The Crisis of the Arab Intellectual: Traditionalism or Historicism. Translated by Diarmid Cammell, University of California Press, 1976.