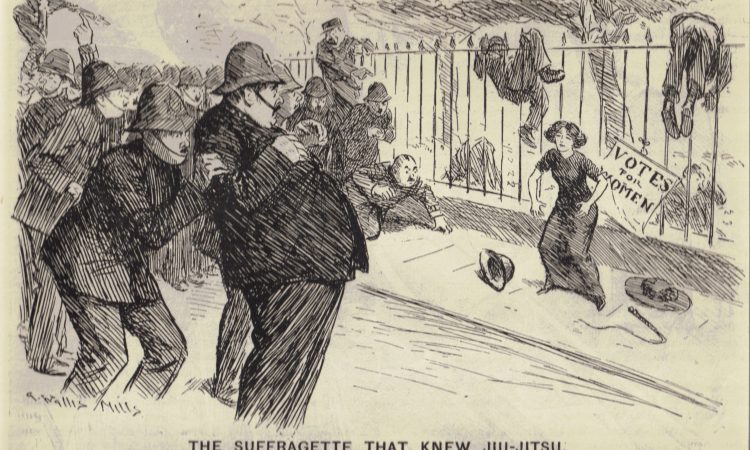 Since the #metoo movement in 2017, the martial arts world has seen a huge uptake in women participating in self-defence classes. These classes aim to strengthen a person’s capacity to protect themselves against a physical attack. Yet, for women, they are also essential in building self-esteem and offering a sense of self-empowerment. This is particularly the case for trauma-informed martial arts programmes, which serve to give victims of sexual assault or domestic abuse control over their bodies and help them reinstate a sense that they are “not a helpless tool of fate.”

However, the increased presence of women in martial arts and the sport’s positive impact on their physical and mental wellbeing is not something new. In Britain, it can be traced back to the early 20th century – a time when the campaign for women’s suffrage was reaching fever pitch and turning increasingly militant.

Women taking part in protests, demonstrations and marches were being increasingly subjected to violence and sexual assault from police and male onlookers, while women in prison were being brutally force-fed – a practice that sometimes ended in death or disablement. They needed some form of protection. Enter Edith Garrud.

Edith Garrud was an experienced martial artist who ran a School of Ju Jutsu in Golden Square, London with her husband William. The married couple had taken over the School from their master Sadakazu Uyenishi – the first Japanese person to teach Ju Jutsu in Europe – when he returned to Japan in 1908.

The idea of self-defence for women was first launched into the popular consciousness by Emily Watt, who wrote The Fine Art of Ju Jutsu in 1906. However, it was Garrud who made it mainstream when she started offering women’s self-defence classes at her School. Her classes were extremely popular and, as a result, in 1909, she was asked by the Women’s Social and Political Union (WSPU), led by Emmeline Pankhurst and her daughters Christabel and Sylvia, to give a public demonstration. Garrud was “inundated with signatures afterwards” and started conducting twice-weekly self-defence classes for WSPU members only.

Up until this point, suffragettes had relied on bats and makeshift weapons hidden in their hats or garters, but now they possessed an invisible tool: Ju Jutsu. Ju Jutsu enabled them to retain the demeanour of innocent women, knowing that they could protect themselves against a would-be attacker if necessary.

The press responded negatively to the idea of women’s self-defence, coining the disparaging terms sufrajitsu and jujitsuffragettes and publishing inflammatory headlines, such as ‘The New Terror of the Police’, which belittled their skilled training. Nonetheless, Garrud used the media attention to her advantage, participating in publicity stunts such as wrestling with policemen (fig. 2) and publicly demonstrating defences against throat or shoulder grabs on male ‘combatants’.

In 1913, the Government introduced the ‘Cat and Mouse Act’, whereby women on hunger strike could be released from jail to recover their health and then re-arrested. The WSPU called on Garrud again, asking her to help them establish a secret protective force – The Bodyguard – to protect their members from re-arrest. The unit consisted of thirty women who were covertly trained in Ju Jutsu and the use of Indian clubs as defensive weapons.

The Bodyguards wore cardboard body armour and fought a series of hand-to-hand combats with police officers who were attempting to arrest Pankhurst, including the ‘Battle of Glasgow’ on 9 March 1914 and the ‘Raid on Buckingham Palace’ on 24 May 1914. They also helped stage many successful escapes and rescuses, using disguises and decoys.

Despite her involvement with the WSPU, Garrud made it clear that Ju Jutsu should never be used to provoke violence or unlawfully attack somebody; it was solely necessary to protect oneself in times of external aggression. Standing at just 4ft 11 inches, Garrud emphasised that with Ju Jutsu – the “soft art” – size did not matter. As it relied on understanding how to use an opponent’s weight to one’s own advantage, it could be used effectively by women to take down men with a minimal force response to violence. A common argument against women’s suffrage was that women were physically frail and, therefore, lacked the ability to participate in politics. Ju Jutsu dispelled this myth, introducing women to new ideas about the possibilities for their gender and undermining assumptions about their vulnerability and physical strength.

But Ju Jutsu was not just a means of social commentary for the women’s suffage movement; Garrud also emphasised that it could be used by women who were seeking protection from violence in their daily lives, whether in the home or on the street. In this way, she sought to change the way that women interacted with, and understood, their bodies and emphasise Ju Jutsu as the underdog’s martial art. She made this explicit through the 1911 play Ju Jutsu as a Husband-Tamer (fig. 3), which taught women how Ju Jutsu could help prevent domestic violence in the home. The play was promoted by a series of step-by-step images showing an abusive husband being toppled by his wife through hip throws, locks and hand twists.

As the First World War broke out, militant suffrage actions were suspended and the Bodyguard was disbanded. However, the importance of martial arts for women continued within the British zeitgeist, through later pioneers like the judoka Sarah Mayer and karateka Pauline Laville-Bindra. Women’s self-defence saw a rebirth in the 1960s and, again, in the 1990s during the second and third waves of feminism, where it was tied into larger discussions about everyday harassment in the home and workplace and challenging harmful gender stereotypes and rape culture. Today, in what can be seen as the fourth wave of feminism, self-defence is continuing to break down cultural perceptions of females as passive and meek and encouraging them to be assertive and self-confident.

Dr Lauren Alex O’Hagan is currently a Research Associate in the Department of Sociological Studies at University of Sheffield. She specialises in performances of social class and power mediation in the late 19th and early 20th century through visual and material artefacts, using a methodology that blends social semiotic analysis with archival research. She has published extensively on the sociocultural forms and functions of book inscriptions, food packaging and advertising, postcards and writing implements.