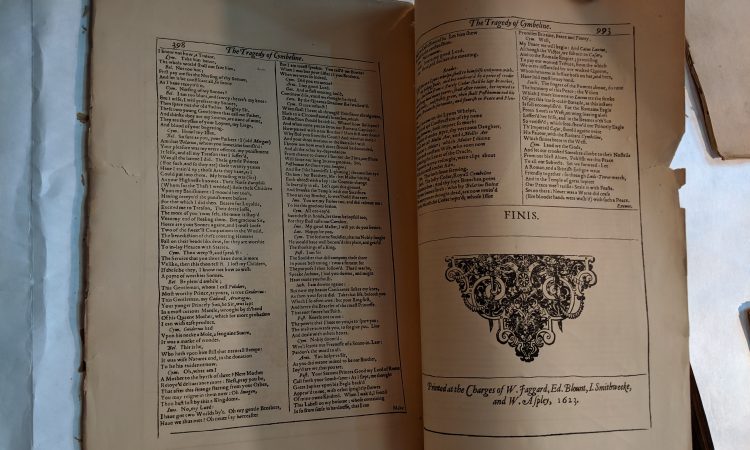 Yeah, no, just zoom to that column there please, thanks –

If a recording and transcript exist, these lines would be representative of my recent ‘visit’ to University of Leicester Special Collections, my first since the start of the COVID-19 pandemic. Researchers are likely familiar with the twinge of awkwardness on entering a hushed rare books or manuscripts room. Imagine, then, the feeling as a librarian pages through a Victorian periodical for you, on camera, via Zoom, as you direct him in clipped shorthand. We had an hour: there was no time to think. As I sat at my laptop eight time zones away, I could only count myself lucky and hope the images would be relevant to my research. After all, when stricter lockdowns had been in force across Britain a few months earlier, even this stilted exchange would not have been possible.

Awkward, yes, and certainly stilted. Yet the encounter was thrilling, and not just because the librarian was so patient and kind, or because it was the first time I had looked at an undigitized primary source in over a year. Never has my sense been clearer that archives are a form of augmented reality; our inconsistent, attenuated access to history made plentiful, fleshy. Even if the flesh was not mine: it is the librarian’s thumb in the corners of my snapshots. These literally digital artifacts [fig. 1] keep the archival encounter itself in view. They refuse to let the intervening remediations recede into what Jim Mussell calls ‘the illusory proximity of text’.[1] Researchers and librarians think of ‘access’ as a practical question of where materials are and how to reach them. Certainly, these questions have been more insistent during lockdowns than at any time in recent memory. But my Zoom session led me reflect on other fundamental contingencies of archival research. Remediation and the researcher’s affect structure access to archival materials and perforce the insights drawn from them. Becoming more transparent and reflective about these contingencies opens up hermeneutic practice by illuminating not only the materiality of texts, but also the materiality of our scholarly processes. It also points to structures of power – who has access to archives, and how – which merit thoroughgoing critique. To paraphrase Troilus wooing Cressida, the act is a slave to limit.[2]

In researching the essay that became ‘Commemorative Print: Serialized Monuments during the Shakespeare Tercentenary Debates’, I followed Linda Hughes’ lead into the ‘sideways’ shuffle between print and digital media.[3] Boolean search queries – ‘shilling’ AND ‘shakespeare’ OR ‘shakspere’, plus a few more variant spellings – dropped me into a quirky moment in 1864 when public men argued about how best to commemorate Shakespeare’s three-hundredth birthday. It became a high-stakes aesthetic and political issue in the process. As I poured over PDFs of digitized periodicals and went to Special Collections to track down Shakespearean reprints [fig. 2], the distance between me and 1864 seemed to accordion closed. Now, I pause to think on the folds of contingency that still intervened. Library catalogues, database search queries, and banks of PDFs are the tools of the resourceful researcher, but our habituation desensitizes us to the infrastructure that subtends them.[4]

Take the example of the ProQuest British Periodicals database [fig. 3]. The materials I collected and the conclusions I drew using this database were reliant not only on my facility with search terms, but also on hidden forms of curation: the algorithmic precision of Optical Character Recognition and the obscured human labor of scanning, indexing, and maintaining the persistency of the records. Hughes oriented us in the extensive new map of Victorian print culture that databases render visible. Now that we have our bearings, it is worth following up on how this digital topography is itself projected — represented but also distorted — by particular technological and historical forces. These reflections should lead us, like Henry Mayhew, not only across the digital archive’s expanding map but underneath it: into the new sewers that are coextensive with the city above, the hidden infrastructure where scholarly value is unearthed and returned to the surface at a keystroke. These issues of archival access have epistemological ramifications, of course, but also political ones. My institution pays an enormous amount of money each year to subscribe to the ProQuest British Periodicals database. Access is not a privilege enjoyed by researchers at many other universities, and especially not by those working outside them. Digitization has democratized archival research, but only on the surface.

Henry Mayhew will be a fitting guide when we return to archives in the flesh, as well. Back in the British Library, I will not feel like a scholar-adventurer in the Richard Altick mode. I never have. I always feel more like a scholar-scavenger. Rather than mastering unknown historical territory, I am on the look-out for a chance encounter with something shining in the dark. Mayhew’s method mirrored that of the mudlarks and dredgers who were his subjects, a ‘scavenger hermeneutics operating according to a principle of selection so open-ended and contingent on external circumstance as to differ in kind from the nearly ascetic rigor of…scientific demystification’.[5] This openness to contingency and receptivity to the chanciness of discovery also describes the subjunctive mood of the archival researcher. It is a less intense disposition than ‘archive fever’ or ‘the allure of the archives’, to cite two paradigmatic archival affects.[6] But it is also more alert to the tenuousness and the hope of the experience.

Victorian periodicals are the stuff of the nineteenth-century public sphere, as print historians continue to document. But sensitivity to the open-endedness and contingency of archival research opens us up to the ways archives constitute the researcher’s ‘intimate public sphere’, in Lauren Berlant’s phrase.[7] Affect is not just an inward glance, but rather a dynamic sense of the relationship between emotion and cognition, self and environment. Two years ago, I was sifting through the Folger Shakespeare Library’s online catalogue (charmingly called Hamnet), looking for copies of Howard Staunton’s 1864 facsimile of the First Folio. I blinked when I saw the following description: ‘Unbound, in individual parts. Imperfect’. I knew the facsimile had been published serially, but I had only examined bound copies, dressed in sensible library buckram or with pretentious Victorian fripperies. At the Folger, with the serial parts of the Staunton Folio fanned out before me like the oversized playing cards in the Disney Alice and Wonderland, I felt my entire project shift [fig. 4]. I wondered at the circumstances that made it possible: not just that this tattered object had survived at all, but that I happened to be in Washington, D.C. because my partner was traveling for work there. The seeming accident of my encounter alerted me to the fragility, and the complexity, of the constellation of circumstances that also aligned when a nineteenth-century reader held the same part issue.

On one level, writing an article is an exercise in concealing the joins of the archival research process. Argument smooths over the situatedness of access and time-extended embodiment. But critically reflecting on these processes allows us to approach ‘the erotics of the archive’ as well as the regulation and technological dependencies of the archival encounter.[8] In this expanded sense, considering ‘archival access’ points to how scholarship is shaped by infrastructure and layers of hidden curatorial labor, as well as the unromantic but crucial issues of funding and library subscriptions. Researchers are, of course, aware of these factors to one degree or another. But opening them up to rigorous critique not only expands the field of inquiry but will also indicate how we can continue to advocate for equity in historical scholarship.

Matt Poland (@mattpoland) is a Ph.D. candidate in English at the University of Washington. His dissertation, “The Global Remediation of Charles Dickens and George Eliot,” explores the transnational and transtemporal circulation of Victorian fiction through books, newspapers, and archives. His article, “Commemorative Print: Serialized Monuments during the Shakespeare Tercentenary Debates,” was recently published in Journal of Victorian Culture. Matt is a contributing editor to At the Circulating Library: A Database of Victorian Fiction, and he currently serves as a grad student representative to the Research Society for Victorian Periodicals.

[4] See Deb Verhoeven, ‘As Luck Would Have It: Serendipity and Solace in Digital Research Infrastructure’, Feminist Media Histories 2 (2016), pp. 7-18. For infrastructure as a critical optic in literary studies, see the ‘Infrastructuralism’ special issue of MFS: Modern Fiction Studies (Winter 2015), ed. by Sophia Beal, Bruce Robbins, and Michael Rubenstein. For infrastructure as a ‘medium or cultural technique’ in nineteenth-century British culture, see David Trotter, ‘A Media Theory Approach to Representations of ‘Nervous Illness’ in the Long Nineteenth Century’, Journal of Victorian Culture 24 (2019), pp. 146-158 (p. 153).