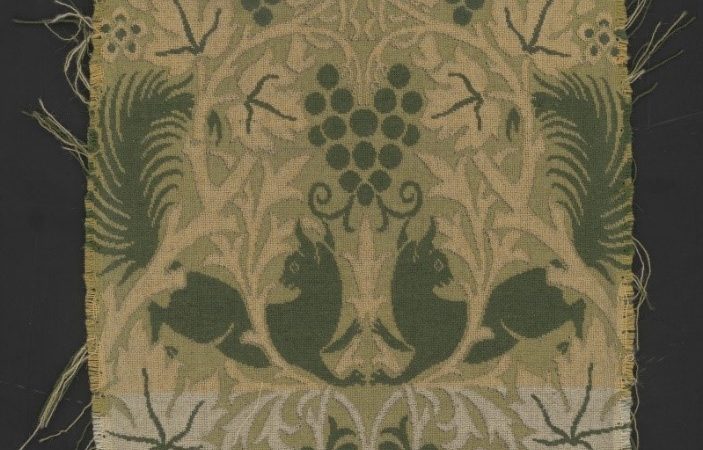 Red squirrels had reason to be wary of the Victorians. Nineteenth-century culture popularised the animals – they were even kept as pets – but the Victorians also unwittingly caused the decline of the red squirrel population by introducing the rival species, the grey squirrel, to Britain.[1] Today, sciurus vulgaris stands at the centre of an emotionally charged debate about the conservation of native habitats. The red squirrel’s persistent appeal most likely has to do with its endearing looks. But in Britain, the species also carries the charm of familiarity and authenticity. These frolicking orange blurs represent a fragile notion of the ‘native’ fauna and flora and serve as a reminder of an intact domestic landscape that existed prior to industrialisation and globalisation. From the poems of John Clare to Beatrix Potter’s The Tale of Squirrel Nutkin, such an image of the red squirrel was alive already in the nineteenth century. The red squirrel even snuck into the British home, being depicted on decorative furnishing products of the Arts and Crafts movement – a fitting mascot, perhaps, of the movement’s broader evocation of a holistic past.

Designers and manufacturers such as William Morris reacted against mass production by returning to medieval, pre-industrial principles of craftsmanship. They also found inspiration in the natural world, especially in their textile productions. Arts and Crafts makers used organic materials and dyes and evoked the fauna and flora of gardens, forests, and fields in decorative patterns. Birds often played a leading role in Morris’s textiles. The Strawberry Thief print, for example, has acquired mainstream fame. But several less widely known textile objects also depict red squirrels. Peeking out from tapestries, embroidered and woven fabrics, the red squirrels of Morris & Co. tell of turn-of-the-century attitudes to decoration, nature, and the home. They also draw attention to designers such as John Henry Dearle and May Morris, whose original achievement was long overshadowed by William Morris’s name.

John Henry Dearle (1859-1932), chief textile designer at Morris & Co., seems to have had a soft spot for squirrels. Around 1898 he created his Squirrel design, which can be found on a piece of woven furnishing fabric in muted yellow and green, held at the Victoria and Albert Museum (fig. 1).

The design depicts the slender squirrels as near mirror images of one another. With their paws almost touching underneath a heart-shaped cluster of grapes and their tails held upright, the animals look away from each other like a pair of shy lovers. Their bodies curl around leaves and branches, while the tails harmonise with the curving shapes of the plants, finding regularity and repetition in the organic. Morris expert Linda Parry describes Dearle’s Squirrel as ‘less successful’ than his other designs. She considers the animals ‘strangely drawn’ and notes that ‘it is not surprising that the original title, Fox and Grape (from Aesop’s Fables) is now no longer used.’[2] But it is precisely the ambiguity of the foxes-turned-squirrels, their archaic un-cuteness, that is intriguing about the design. The squirrels are not plump and anthropomorphic, like Beatrix Potter’s illustrations for children, nor are they meant to look realistic. As William Morris wrote, decorative art ‘must be suggestive rather than imitative’.[3]

The frayed edges of the piece of cloth, whose stray threads reveal the woven texture of the material, seem almost to be extensions of the squirrels’ tails, while reminding us of the practical use of the fabric, which was cut for furnishing purposes. A similar vividness of the fragmentary emerges in a sketch for a textile design of squirrels and plants, only part-finished in watercolour, by an unknown artist (could it be May Morris?) and attributed to Morris & Co (fig. 2). The half-finished state of the drawing gives emphasis to the playful movements of the squirrels. Their simple but instantly recognisable shapes link the ornamental arcs of the plant stems, while oak leaves and acorns enhance the woodland theme. In the coloured areas of the sketch, the delicate outlines and expressions of the squirrels are blurred. The unfinished state of the image ensures its charm, while also leaving a snapshot of the complex processes involved in the manufacture of Arts and Crafts textiles, from initial draft to finished product.

Henry Dearle returned to the squirrel theme with his design for the attractive Cock Pheasant tapestry of 1916 (fig. 3). The tapestry depicts the rich foliage of a hazel tree.

The pheasant dominates the design, but the spectator quickly notices the red squirrel at the lower end of the tapestry, about to climb the trunk. Dearle is attentive to natural details here, even though the squirrel’s features reveal continuities with his earlier, more abstract Squirrel pattern. Half-hidden in the undergrowth against a dark background and sporting a slightly malicious expression, the animal adds depth to the surface of the tapestry. The surrounding flora is distinctly British or at least northern European, featuring bluebells, a hazel tree, and garden flowers. The pheasant, a popular game bird, would have matched the taste of the wealthy purchasers of Morris tapestries. Although pheasants seem characteristic of the British landscape today, they count as a non-native species that was introduced in the eleventh century. Their population rose in the nineteenth century, in accord with the upper-class fashion for hunting.[4] Dearle’s scene of pheasant, chaffinch, and red squirrel thus evokes an idealised native British habitat which, at closer inspection, turns out to be as ‘made’ as the tapestry.

Red squirrels occupy centre stage on a set of hangings for a lady’s bedroom designed by May Morris (1862-1938) around 1916 (fig. 4). May was a successful designer and embroideress, who was integral to her father’s family venture but pursued an independent style and career in the early twentieth century. The light and colourful embroidery – appropriate for the interior of a bedroom – depicts two squirrels surrounded by birds and foliage. As Parry notes, ‘[t]he embroidery has a naturalistic clarity in its design, technique and colouring similar to that seen in nineteenth-century Chinese pictorial embroideries.’[5] It also recalls Jacobean crewel embroidery.[6] These stitched patterns often featured ‘swirling tree-of-life designs’ with native woodland creatures, but combined them with references to non-European flowers and birds, as ‘a result of cross-cultural exchange between East and West’.[7] In Morris’s embroidery, the red squirrels, pheasant, cockerel, and goldfinches (shown picking dandelion seeds) evoke English farmland scenes. But some of the more colourful, exotic-looking birds are not native to the UK. The bigger birds at the top are reminiscent of a blue jay and a hoopoe and one seems to sport the colourful plumage of a parrot. Whereas the two red squirrels anchor this textile ‘at home’ in England, where it was made, taken as a whole, the natural world stitched onto the fabric is suggestive of the historic and transnational influences that shaped Arts and Crafts.

The red squirrels figured on these textiles embody the Arts and Craft Movement’s elevation of the home – both indoors and outdoors. But these objects also demonstrate that cultural and ecological notions of belonging are continuously being remade. To the twenty-first century spectator, nineteenth-century ecologies are worked into these fabrics alongside Morris’s both nostalgic and utopian revival of pre-industrial manufacture. This vision has renewed poignancy at a time when the global textile industry acts as a prime cause of pollution and the exploitation of resources.

Stefanie John is a lecturer and postdoctoral researcher in the Institute of English and American Studies at TU Braunschweig, Germany. She is currently working on a project on textile objects in British fin-de-siècle literature. Her research interests include poetry from the Romantic period to the present, representations of nature, place and environment, and relationships between literature and material culture. Her monograph Post-Romantic Aesthetics in Contemporary British and Irish Poetry is forthcoming in 2021.

[3] William Morris, ‘Some Hints on Pattern-Designing’, in News from Nowhere and Other Writings, edited by Clive Wilmer (London: Penguin Books, 2004), 259.