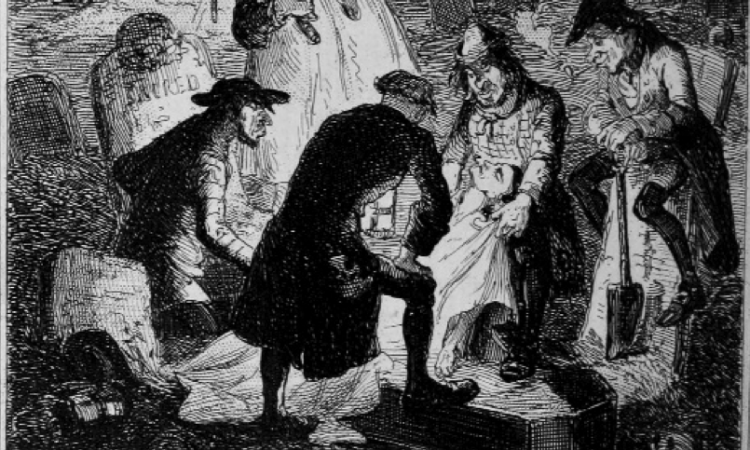 The story of the medical profession in Britain during the first half of the nineteenth century is complex, and can be seen as representative of several key shifts in social, educational, and economic outlook. The emergent ‘professions’ of the early-Victorian period, including medicine, would undergo dramatic transformations in the wake of fast industrialisation, population growth, and increased centralised regulation. One of the most notable changes to the medical profession at this time is the increase in generalised medical schools, responding both to a rising number of prospective students, and to a public and governmental desire to enact more scrutiny on the actions of ‘medical men’. Whilst this was enabling more students to become trained, as well as helping to establish a more rigorous standard of qualification, medical schools were also struggling with a major issue of supply. Cadavers, used for anatomical teaching and dissection, began running low as demand increased, leading to the rise of another major profession essential to Britain’s medical history.

The Rise and Role of the Medical Schools

Historically, the disciplines of physic, surgery, and apothecary had co-existed separately with different degrees of regulation and training. As John Knott points out, ‘the old trade of the barber-surgeon had been slowly transformed into science’, alluding to the place of the surgeon in particular as one without formalised training, learned on an apprenticeship basis.[1] The increasing intake of students in medical schools, which were attempting to regulate and define a standard of qualification for the medical profession, necessitated a new approach to certain forms of teaching, particularly anatomical. Where anatomical dissection might previously have been taught by surgeons to a small group of apprentices by observation, the emphasis of the new curriculum became focused on practical, rather than purely theoretical, anatomical experience. According to J.B. Bailey, by the turn of the nineteenth century ‘a knowledge of anatomy was insisted upon by the Corporation of Surgeons’, meaning that more bodies would need to be procured in order to allow every student to participate and qualify.[2]

The status and income of the new medical schools was dependent on being able to supply these opportunities for dissection. This system varied across universities – Elizabeth Hurren notes that, even into the late nineteenth century, Oxford University’s medical school usually awarded degrees in anatomy after students had undertaken practical training elsewhere – as issues with procurement arose.[3] Until the 1832 Anatomy Act, only the bodies of executed murderers could legally be used for dissection purposes, and this number had remained steady for decades. [4] This was in sharp contrast to the exponential increase in medical students; according to F. G. Parsons, ‘there were 200 regular students of anatomy in London in 1773, but, in 1823, there were about 1000.’[5] Long-standing religious ideas about the sanctity of the intact body ensured that very few bodies were donated willingly to the anatomy schools and so, as Bailey admits, ‘when bodies were obtained for dissection it was generally by surreptitious means’.[6]

Bailey’s account of the work ‘resurrectionists’, in a diary adapted from the true accounts of body-snatcher, Joseph Naples, begins with the admission that ‘the complaint as to the scarcity of bodies for dissection is as old as the history of anatomy itself’.[7] Initially, this resurrection work, exhuming recently-deceased corpses for use in anatomical dissection, was undertaken by doctors themselves, but, as Knott points out, ‘as the scale of activities and the risks of detection increased, they offered money to others to undertake the work.’[8] The act of body-snatching was thus outsourced, and bodies in this context become saleable commodities, valuable to those procuring them for a growing medical establishment. Ruth Richardson estimates that by the turn of the nineteenth century, several thousand corpses were exhumed every year, a significant proportion of which were sold on to anatomy schools.[9]

This commodification of bodies resulted in what Hurren calls ‘a complex process of professionalisation’ in medicine, wherein students keen to complete training and gain professional accreditation could purchase additional dissection material.[10] The introduction of the generalised medical school had attempted to widen access to medical education, beyond the small-group apprenticeship learning which had been the norm, but these issues around anatomical procurement only worked to further the interests of the financially fortunate. By monetising the trade of resurrectionism, a ‘black market’ in corpses soon developed, leading to even more covert practices to evade the growing attention of the authorities.[11] As stories of resurrections reached popular press, public vigilance around the graveyard increased, and many people took individual measures to ensure that their bodies would be safe from the hands of the anatomists, including using impenetrable coffins, paid watchmen, and heavily fortified tombs. After the 1832 Anatomy Act, which gave anatomy schools access to ‘unclaimed’ bodies from workhouses, incidents of resurrectionism decreased, but its place in the public and literary imagination endured, resulting in widespread distrust of the medical establishment which persisted well into the twentieth century and beyond.

Rosalind Crocker (@rosiecrocker98) is a first-year doctoral researcher at the University of Sheffield, looking at the figure of the ‘medical man’ in neo-Victorian writing. Her research, also around illness narratives, resurrectionism, and contagion in literature, is funded by the AHRC through the White Rose Consortium.