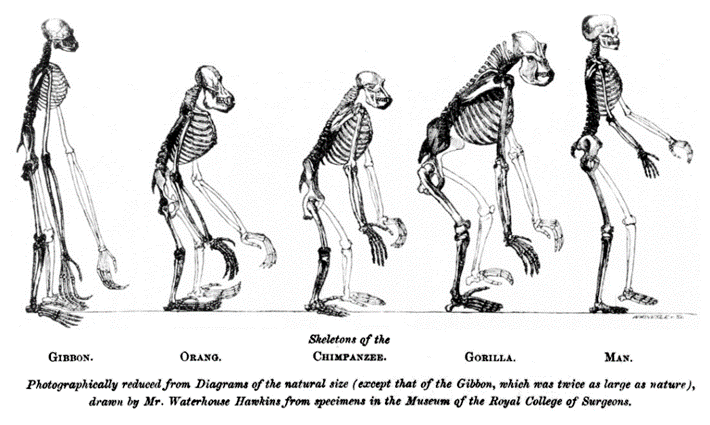 In the refreshment room of London’s Zoological Gardens, the protagonist of Edmund Saul Dixon’s short story, ‘A Vision of Animal Existences’ (1862), spots a woman reading a ‘thick volume’ that he recognizes. He pulls out reading material of his own—a newspaper—and, perusing its contents, finds a discussion appropriate to his surroundings: extinction, artificial selection, and species are amongst its topics. Prompted to refocus on the ‘volume’ of his nearby reader, however, he forges a further connection: ‘the blue-robed lady’s green-covered book teaches that the world of plants and animals is a world of incessant change; that, in coming ages, every living thing will be only a metamorphosed shadow of its present self’.[1] The ‘green-covered book’ is of course Charles Darwin’s On the Origin of Species, published in 1859 and thereafter a frequent topic within the pages of the Cornhill Magazine, where Dixon’s story was published, and other mid-Victorian periodicals. (Anthony Trollope’s novella The Struggles of Brown, Jones, and Robinson, concerning the same subject, had been serialized in the Cornhill during the previous year.)

I choose to open this discussion with ‘A Vision of Animal Existences’ because it shows how quickly and perceptively the implications of Origin were extrapolated by the popular press. With almost no prompting by Darwin (who famously gave only a passing reference to human evolution in the closing pages of his book), these publications turned to reflect on the place of individuals within the grand schema that he was proposing via natural selection. The entire world, as Dixon imagines it through the microcosm of the Zoological Gardens, seems to pulsate with a new and urgent consciousness of evolutionary perspectives. The ‘blue-robed’ reader and her son become a part of the protagonist’s dream, and then personified as ‘Natural Selection! Originator of Species!!’ and ‘Struggle-for-Life’.[2] During an increasingly feverish exchange between the three figures (which culminates in a savage fight between wolves, in demonstration of the ‘struggle’), the protagonist reflects painfully on the ‘poor consolation’ that natural selection implies for those who are ‘born weak’, and more widely on ‘our short span of life’ compared to that of the species.[3] Dixon’s account does not attempt to judge the ‘truth’ of Darwin’s theory, but is clear that the vision it implies is a potentially melancholy one.

Dixon’s story exists, however, along a spectrum of popular responses to Origin, which could be as much comic as serious. The author of one short piece, ‘Unnatural Selection and Improvement of Species’ (1860), provides a satiric reflection on what this process might mean for social engagements and the marriage market; they offer the worrying thought that, carried to its extreme, natural selection would eventually lead to ‘simpletons and snobs’ becoming ‘extinct’, and therefore deny people the chance to laugh at the ‘follies of our fellow-creatures’.[4] A similarly playful engagement with the suggestions of Darwin’s theory is to be found in the work of the artist Kate E. Gough (Figure 1); in one collage (photographed c.1870), Gough pastes her family’s faces onto the bodies of apes, as if to mock Samuel Wilberforce’s supposed question to Thomas Henry Huxley: ‘whether he had a preference for the descent [from apes] being on the father’s side or the mother’s side?’[5] Born four years before the Wilberforce-Huxley debate on Darwin, it seems that the teenage Gough found no alarm in the suggestion of descent from apes, but rather a plentiful source of amusement.

The subject of my JVC article, ‘“Short-Spanned Living Creatures”: Evolutionary Perspectives in Rhoda Broughton’s Not Wisely, but Too Well (1867)’, contains all these varied responses to natural selection in some degree; Not Wisely, but Too Well is alternately comic and serious, but always deeply engaged with what Darwin’s ideas mean for individuals and society. It seems likely the novel was composed during 1863, specifically following two works about human evolution: Charles Lyell’s Antiquity of Man and Huxley’s Man’s Place in Nature, both published in February. Not Wisely, but Too Well teases out the contradictions and tensions exhibited by both these follow-ups to Origin, doing so in the context of a sensational love plot that centres on the impulsive Kate Chester and roguish Dare Stamer. It is only reasonably recently that Victorian popular fiction has been thought to have had concern for the ‘serious business’ of science, but I hope this article demonstrates, through the case of Broughton’s novel, how it might serve to illuminate mid-nineteenth-century attitudes toward Darwin’s theory and evolution more generally. As if to taunt the presumptions of contemporary critics (who also felt that sensation fiction like Not Wisely, but Too Well had no concerns beyond the ephemeral), one section of the novel follows Broughton’s heroine into the Exotic Court of the Crystal Palace at Sydenham—substituting artificial warmth for the contemplation of things ‘past, present, and to come’.[6] Yet she soon relocates to the Greek Court (see Figure 2) and begins to consider exactly that; upon looking at a statue, Kate reflects how

As with Edmund Saul Dixon’s ‘A Vision of Animal Existences’, Not Wisely, but Too Well immerses us in a world in which the implications of evolution, and of natural selection in particular, seem to be inescapable. But it is through this evolutionary perspective—implying ‘incessant change’, instability, and chaos—that Broughton embarks on a recalibration of Victorian values, lambasting self-assured assumptions about progress. Without being drawn on its truth, Broughton’s novel clearly indicates the imaginative power of Darwin’s theory.

James Aaron Green (@JAaronGreen) is an early-career scholar specializing in British popular fiction and science, with additional interests in game studies. His work has been published with Victorian Network and he has articles forthcoming in the JVC and Gothic Studies. His first monograph, Sensation Fiction and Modernity, is due to be published with Palgrave Macmillan in 2022.