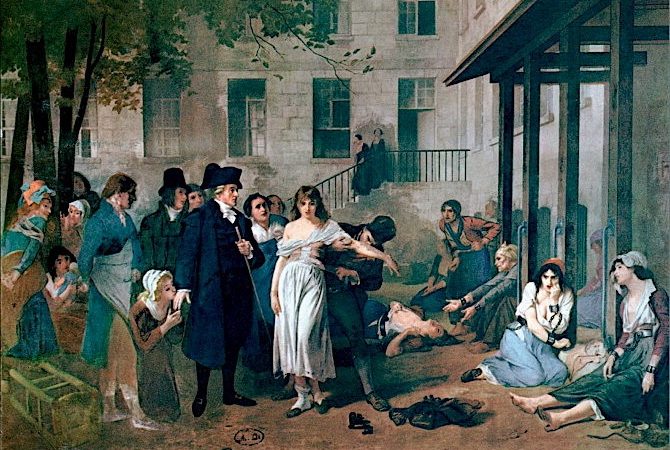 In ancient Greece there existed the medical concept of a woman’s “wandering womb”; that is, the womb could move about the body, obstruct breathing and press on other organs to cause various symptoms of illness. It was “an animal within an animal”, according to the celebrated ancient Greek physician Aretaeus of Cappadocia. In the late nineteenth century, the notable French neurologist Jean-Martin Charcot began his study of unusual physiological symptoms presenting in women, such as nervous anxiety, faintness, irritability, uncontrolled movements, paralysis which would come and go, and overt sexual desire or lack thereof.[1] In so doing, he came to repackage the wandering womb syndrome and gave it a more scientifically modern update: “hysteria”, from the Greek word hystera, ‘uterus’.

Although such disorders could also be found in men, they were considered predominately an affliction of women. Their cure was no longer the pleasant or sometimes disgusting scents used by the ancients to lure the womb back into its proper position, but all manner of bizarre Victorian approaches: from blasting the abdomen with jets of water, to keeping women constantly pregnant so that the womb had no time to wander, to a vibrating apparatus applied to the genitals. One cure that was popular in England and America was known as the ‘rest cure’, and this treatment of simply resting no doubt met with some success in cases involving anxiety or irritability, perhaps because they may have resulted from nineteenth-century social expectations to endlessly bear children, or from spousal abuse.

For the purposes of Charcot’s study, he set about applying the recent technology of photography to have images taken of female ‘hysterics’ at his premises at the Salpêtrière hospital, in an attempt to completely characterize the physical manifestations of the ‘disorder’. Patients who were truly insane or had epilepsy were not part of the hysteric cohort. But something unusual happened at Charcot’s famous Tuesday lectures, attended by physicians from all over the world, including an inspired Sigmund Freud, a great admirer of Charcot. Namely, the ‘hysterics’ were expected to perform, even bribed to do so, in order to fulfil the expectations of the great doctor and his colleagues. And perform they did, and for the book of photographs as well, exhibiting all manner of torment and anguish, on demand under hypnosis. The resulting multi-volume work, Iconographie photographique de la Salpêtrière (1875-1880) gave a sense of scientific legitimacy to the disorder of hysteria and was intended to be used as a pedagogical aid for other physicians. As drawings of the elicited symptoms were deemed inadequate, the new medium of photography came to the rescue in the skilful hands of Paul Régnard and Albert Londe.[2] As it turned out, in the compilation of the Iconographie there was an “extraordinary complicity between patients and doctors, a relationship of desires, gazes, and knowledge”. Needless to say, these extraordinary images of women in extremis became well known far outside the corridors of the Salpêtrière.

It should be pointed out that ‘hysteria’ is no longer considered a legitimate medical diagnosis and many of these women were exhibiting symptoms of what would now be classified under the condition of post-traumatic stress disorder (PTSD). Perhaps this was due to a physically or mentally abusive marriage, or sexual abuse, as was the case with Charcot’s favorite hysteric, ‘Augustine’ (Louise Augustine Gleizes) who had been abused, molested, and raped as a young girl. Charcot himself used the term traumatic hysteria. Similarly, “Freud came to believe that the specificity of hysteria’s cause lay in a precocious and cruel experience of sexual assault.”[3] Other causes can be attributed to very traumatic accidents (such as a train crash) or a nearby factory explosion, and the horrors of World War I produced in many men similar symptoms that were referred to collectively as “shell shock”. But the word ‘hysteria’, in a Charcot sense, is still with us today: in the form of ‘hysterical laughter’, ‘mass hysteria’, or in the derogatory manner of a man telling a woman ‘Don’t be hysterical’.

Victorian women were expected to have frail dispositions easily prone to ‘nerves’, fainting spells, irritability, and lack of sexual desire. Indeed, the condition of hysteria became an integral part of the Victorian zeitgeist, especially in France, England, and America. It should be mentioned that, in fact, many a female fainting spell of the time could be attributed to very fashionable tightly worn corsets.

Even in the early twentieth century, it was thought that a woman’s womb could be injured by studying Greek or mathematics. It was only later, following the psychoanalytical work of Freud who observed that hysterical disorders were also found in men (with he himself also prone!), that the affliction was determined to lie in the brain of the individual. The symptoms presented by the hysteric patient were elicited via the means of hypnosis in order to provoke the trauma that precipitated the disorder. In a sense, an act of theatre was being performed between patient and doctor.

But also, and at the same time, it was managing images with an eye to forms, that is, an aesthetic. Its paradigm went beyond photography and theater, to painting … an aesthetic canon, of what he called Demoniacs in Art – with a certain notion of Baroque art, a certain use of iconography understood, this time, in its most traditional meaning of pictorial representations. [5]

It was only natural that artists would take note of Charcot’s photographic catalogue of mental torment, as it seemed to represent an important aspect of the (female) human condition. For example, some iconic poses taken from Iconographie found their way onto the stage in the theatrical hands of Sarah Bernhardt. In the painterly hands of nineteenth-century century artists, we find hysterical reverberations in the many depictions of the romantic but tragic figure of Shakespeare’s Ophelia, accomplished by such greats as Alexandre Cabanel (1823-1889), John Everett Millais (1820-1896) and Ferdinand Victor Eugene Delacroix (1798-1853).

Another classic image influenced by the hysteria epidemic is of course Proserpine (Fig. 5) by Dante Gabriel Rossetti (1828-1892). The model for this work, Jane Morris, was a muse of the Pre-Raphaelites who represented their notion of ideal feminine beauty. Yet “there remains a mystery of the ill health of Mrs Morris, who took to the sofa in 1869, at the age of twenty-nine, and never really left it.”[6] Indeed, sources for Jane’s chronic ailments range from depression, melancholia, psychosomatic disorders, chronic back pain, gynaecological conditions, or even an ‘illness of convenience’:

A good deal has been written about how Victorian women were “invalided out” of society; Janey exemplifies the opposite tendency, the illness of convenience, for the women to whom taking to the sofa added a new exotic dimension, attracting sympathy, cultivating mystery, removing them to realms beyond domestic blame.[7]

Another Pre-Raphaelite ideal beauty was Elizabeth Siddal, who famously posed in a bath for John Everett Millais’ Ophelia (1851-52). Siddal became very ill afterwards and her father demanded compensation from Millais for her resulting medical expenses. She suffered from recurring ill-health, was often bedridden, with a deteriorating mental state, and became a drug addict. Her mental anguish was no doubt compounded by the fact that her lover, Rossetti, was reluctant to marry and only did so after a two-year estrangement. She died of an overdose of the drug laudanum two years after the marriage.

Images such as those of Ophelia present a stark contrast with the more classical depictions of the ideal sexualized woman, which, it might be argued, remain with us to the present day. Art’s ‘hysteria phase’ seems to have come and gone, much like the condition itself.

Dr. Joel L. Schiff is the author of eight books on various subjects, two of which are on women artists. He was born in Chicago, grew up in Los Angeles, and lives in Auckland, New Zealand.

[1] Considered to be the founder of neurology.

[2] “Many times, in the course of our studies, we have regretted not having the means at our disposal to perpetuate through drawings the memory of cases that we have had the chance to observe and that are interesting for very different reasons… Later, … we had the idea of photographing the epileptic and hysterical patients whose constant presence at … the Salpêtrière frequently allowed us to see them in the midst of their attacks.” Preface to Vol. I, Iconographie photographique de la Salpêtrière.