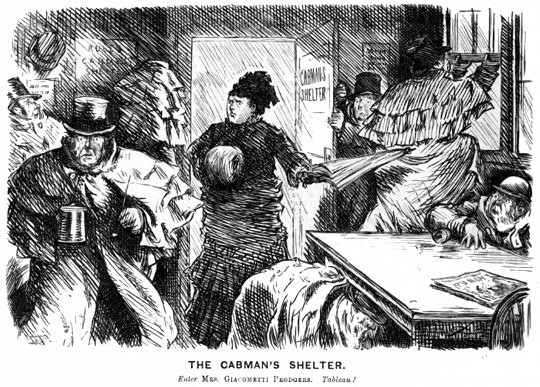 On 10 February 1875, William Seymour, a cab driver, was remanded in custody and charged with stealing ‘22 lbs of beef’ and ‘5 lbs of veal’ from Mr Henry Moorby who owned a butcher’s on Leece Street in Liverpool.[1] Although William categorically maintained his innocence, he was charged with theft and the Liverpool Mercury commented that ‘upon the arm and breast of [his] coat were traces of suet which proved incontestably that he was guilty of the crime’.[2]

Although this may begin like a traditional tale of a lowly cab driver who was struggling to provide for his family, there is more to William’s story than meets the eye. William Seymour was a gender passing individual: a historic person whose biology was contrary to their gender identity. As I sit in my office looking out of my window on a surprisingly sunny morning in Liverpool, reflecting back on another fantastic LGBT+ History Month, I think back to individuals like Williams Seymour who were brave enough to challenge gender binaries in the nineteenth century.

William was in fact a biological female who lived and identified as a man in all aspects of his life. He looked visibly masculine, worked as a cab driver, presented as male and was married to another biological female named Agnes. Indeed, William earned himself the title of ‘The Female Cab Driver of Liverpool’ with newspapers focussing on his gender passing identity as opposed to the theft for which he was originally arrested.

William Seymour was born ‘Mary’ and lived in Taunton, Somerset in 1850. At fourteen, Mary married an army surgeon named ‘Honeywell’ and the couple endured an unhappy marriage, according to the Liverpool Mercury and the Liverpool Albion.[3]

In 1866, Mary Honeywell escaped their abusive marriage and moved to London where they assumed the identity of ‘William Seymour’ and remained presenting as a man for at least nine years. William became a cab driver and drew men’s wages, fitting into the cab driving community as a man. Newspapers reporting on William’s case recognised that he looked visibly masculine, writing:

Her face being of a masculine type, her complexion florid and she having an impediment in her speech caused by a defective pallet, conspired to render the illusion perfect.[4]

The Edinburgh Evening News also commented on William’s appearance and wrote that, ‘she is a person of masculine appearance… a husky and croaked voice as to startle one on first hearing it. Her stature is small and her face smooth’.[5] William’s speech impediment seemingly helped his performativity because it gave him a gruffer-sounding voice.

The Edinburgh Evening News also commented on William having a ‘smooth face’, clearly referring to his lack of facial hair. Facial hair for nineteenth-century men was important as it ‘served as the true and natural mark of manly independence and virtue’, according to Christopher Oldstone-Moore.[6] For William, his ‘smooth face’ was focussed on in newspaper reports as a visual sign to show the contemporary public that he was not a biological man.

After three years of living in London as a cab driver, William appeared in the 1871 census living in Back Ashton Street, which is now part of the University of Liverpool. He was living with his wife Agnes and her brother, with William being labelled as ‘Head’ of the household.

Interestingly, William lived amongst professionals including teachers, a pianoforte maker and a pilot on Back Ashton Street, and rented rooms off Mrs Ellis. Perhaps living in plain sight offered him security in passing successfully as male. Mrs Ellis occupied 65 Back Ashton Street for at least three years and had a good repertoire of lodgers during that time. She remained landlady at the property even after William’s identity was publicly exposed, which suggests that this revelation did not affect her reputation.

After William’s arrest, he was held at Whitton Gaol (known today as Her Majesty’s Prison Liverpool) and was brought to Mr Thomas Stamford Raffles ESQ for a verdict the following day. Using the Quarter Session and Calendar of Prisoners held at Liverpool Central Library, William was sentenced as number forty-eight of fifty-one. On the trial notes that can be seen below in figure 2, there was a handwritten note written in red which reads:

On being asked in what name she would be tried she replied M.H. [7]

It is likely that ‘M.H.’ in this instance referred to William’s married name of ‘Mary Honeywell’.

I find William’s decision to be tried as female and under his married name an interesting one. Was he pressured into this decision by authorities? Was it in a bid to be treated more leniently? Or was it that William no longer wanted to present as male when faced with a guilty verdict?

Mr JB Aspinall, the recorder for the trial, posed a similar question to William, asking:

How do you account for the way in which your going about in male clothing and as a car driver? What is the meaning of it? Of course its not an offence but one wishes to know something about you. [8]

This matter-of-fact tone from Mr Aspinall suggests that gender passing occurred more frequently than we would think. The court seemed unfazed by William’s gender passing identity, stating ‘of course its not an offence’. Instead they wanted to know more about him as an individual.

William’s story not only made local news in Liverpool but national news, with the Pall Mall Gazette covering the story and a nod to his case in Punch magazine. Both of these focussed on the fact that William was a biological female who was a cab driver.

The Pall Mall Gazette, known for its liberal articles, raised the question of whether women would feel safer knowing that the ‘driver on the box of the vehicle they engage with was a “woman and a sister” instead of simply being a “man and a brother”’. [9] The Pall Mall Gazette also used the example of Mrs Giacometti Prodgers in their article, and pondered if she and William may have encountered one another in London.

Mrs Prodgers, also known as ‘The Cabman’s Nemesis’, can be seen in a cartoon published in Punch shown in figure 3.[10] It was thought that Mrs Prodgers regularly used cabs around London and stopped just short of her original destination. If the cab driver charged her the full fare, then she threatened them with the law and was successful in over fifty cases. [11] The cartoon shows Mrs Prodgers entering the cab shelter and the cabmen scrambling to their feet and hiding from her. I wonder if William and Mrs Prodgers ever came into contact and if she ever challenged William over his fair calculation or, indeed, his gender presentation?

What is interesting about the Pall Mall Gazette running an article on William is that his criminal conviction was not discussed. Instead, the article focussed on having a progressive conversation about the safety of women using public transport, and William’s gender passing identity sparked that conversation.

In a short hearing, William was found guilty of theft and sentenced to two months hard labour which was to be carried out in Whitton Gaol. The jail originally housed both male and female prisoners, but William was housed in the female wing. After his sentencing, William disappeared from the records and I have been unsuccessful in locating him further. He may have returned to his wife Agnes under a new name, he may have remained living as a female, or he may have moved to another city and pursued another identity.

What do gender passing individuals like William Seymour tell us about nineteenth-century gender?

First, they tell us that gender identity was a slippery slope full of challenges and assumptions. Despite the idealised images of the sexually frustrated middle-class woman, the nineteenth century was littered with questionable gender performances, both publicly and privately. Take Boulton and Park’s alter egos Fanny and Stella, for instance, or the relationship between Arthur Munby and Hannah Cullwick as well as Dr James Miranda Barry. Indeed, the lack of judicial shock in the court room, or criminal charges surrounding William being exposed as biologically female whilst being remanded in custody, implies that there was little concern around gender passing at that time. Although gendered ideals existed, they were just that – ideals – and were far from uniformly followed. Instead, gender was just as fluid, performative and unstable as it is today. William demonstrated this by creating a new life for himself after he escaped from an abusive marriage at a young age and remained independent for nearly a decade.

Dr Billie-Gina Thomason (@Billie_Gina) has recently completed her PhD at Liverpool John Moores University, titled Not Every Man was Male: Gender Passing in Nineteenth Century Britain. Her thesis explores the lives of twenty-five working-class gender passing individuals who were biological females but identified as men. Using newspaper articles, pamphlets, census material, street ballads and death certificates, Billie-Gina has created microbiographies about the lives of these individuals and pieces together their lives looking at their employment, their relationships, their physical bodies and presentation, and their exposure. She has also developed a conceptual framework called the 4 C’s of Passing of to explore how historic gender-nonconforming individuals living as men embodied their gender identity.