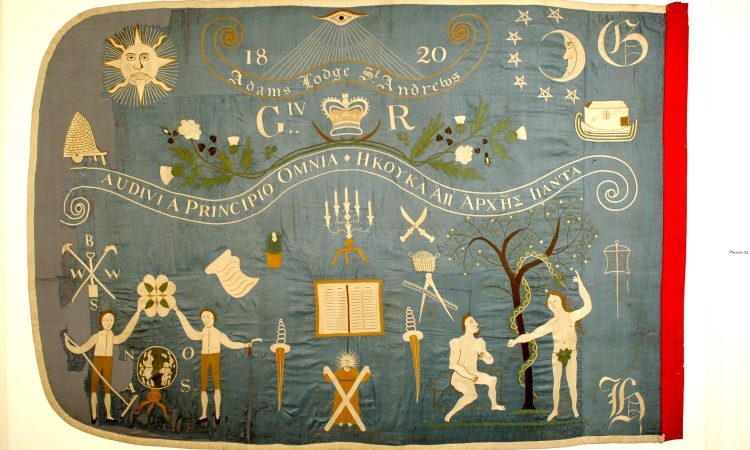 In July 1844, a jovial, portly ship’s steward named Sharrock Dupen mounted a white horse in the Cornish town of Redruth and prepared to accompany 65 of his fellow Free Gardeners in procession to his home town of Hayle, a distance of some ten miles. He was preceded by a trumpeter on horseback, a Brother holding the banner of the Cornubian Lodge, the chaplain carrying a bible on a purple velvet cushion, and a triumphal arch of fruit and flowers borne by two senior members of the Order. They would all have worn long, dark blue aprons embroidered with floral designs and biblical images, and on their silk sashes they would have pinned tiny silver rakes, spades or watering cans. On his collar, Grand Master Dupen no doubt displayed the Master’s Jewel.

The local newspaper published an enthusiastic account of the cheering and applause that greeted the procession as it moved through Camborne and Copperhouse to the port of Hayle, where the ships were all flying their colours in honour of the occasion. The day concluded with a banquet at the White Hart Hotel, where Brother Crotch had taken over the management from Jane Trevithick, widow of the great engineer Richard Trevithick.[1]

The Order of Free Gardeners was one of many Friendly Societies that proliferated in Victorian Britain. They sat alongside the cheaper option of a burial club or the pure insurance options offered by ‘friendly collecting societies’ like the Liverpool Victoria or the profit-making Prudential, as a means of protection against the ‘ultimate disgrace’ of a pauper burial.[2] By paying a monthly contribution, members could insure against not only burial expenses but also sickness, accident, unemployment, or old age. Unlike the medieval guilds of skilled artisans, not all societies operated occupational criteria for membership, but the tradition of elaborate costumes and feasting was common to both.[3]

The first recorded Lodge of Free Gardeners appears to have been founded in Scotland in Haddington in 1676, when professional gardeners were first employed to lay out the parks around the new country mansions. They came together, following the example of their fellow workmen, the stonemasons, adopting similar hierarchies and coded greetings but with added horticultural symbols and regalia.[4] In later years many were also to adopt horticultural names such as Rose, Olive or Cedar of Lebanon for their lodges. Although their rituals resembled those of the Masons, and Grand Master Sharrock Dupen was also a Freemason, this dual membership was by no means universal and the two brotherhoods differed in one important respect: the main purpose of Masonic lodges was the creation of social bonds between members rather than mutual insurance.[5]

At the time of the 1844 procession, the numbers joining Friendly Societies were on the increase, growing from perhaps a million in 1835 to 1.5 million by 1850, with the largest numbers in the industrial north and midlands, as people moved to urban areas away from family networks and the patronage of country landowners. By 1874, a Royal Commission estimated that some 60% of adult males, or four million workers, belonged to some sort of society.[6] Membership was almost exclusively working class, with leadership roles often taken by skilled workers or small businessmen like Sharrock Dupen.

The Free Gardeners appear to have been unusual in that they paid an end of year dividend from their profits to their members, but the motivation for joining was not just financial. Friendly Societies were distinguished from other insurers by their social activities, or in the popular term, ‘conviviality’.[7] They held monthly meetings in public houses, often paying for the venue by committing a certain amount from their funds for the purchase of beer and spirits.[8] It was this aspect of membership that brought them into conflict with the ruling elite. On the one hand the gentry welcomed the saving in the poor rate brought about by working men protecting themselves against falling into penury, but on the other hand they were drinking in pubs, and using their societies’ funds to do so.

Friendly Societies set out to redefine respectability as collective self-help without external supervision and the pub was virtually the only place where members of could meet free from interference.[9] It was partly to reinforce the respectable nature of their activities that the Free Gardeners, like the Oddfellows and Foresters, identified a Biblical heritage going back to the Book of Genesis. In an early taster of democracy, Friendly Societies permitted working men who had little control over their lives to take responsibility for insuring themselves and running their own meetings. Men who could not vote or stand for election could still look like community leaders as they paraded down the street in elaborate costumes and were applauded by the public. Although the middle class made initial attempts to take over by placing patrons in leadership roles, these were largely unsuccessful and eventually most societies were left to their own devices.[10] After the new Poor Law of 1834 introduced tougher conditions for claimants, the saving on the poor rate became less of an issue and the attitude of government became noticeably less paternalistic. In the same year, a new act repealed many of the earlier restrictions imposed on the societies.[11] By the 1870s they were estimated to have four times more members than the Trade Unions and, while the 1875 act reintroduced a few more regulations, in general the tactic had become one of persuasion through, for example, tax breaks rather than coercion.[12]

By the late nineteenth century, national affiliated organisations like the Foresters and Oddfellows had grown at the expense of the smaller local societies. With size came increased bureaucracy and infighting, with orders splitting so that there were at least half a dozen varieties of Oddfellow, for example, and several different groups of Free Gardeners bickering over nomenclature. The convivial element of the Friendly Societies also started to decline as the working class gained more leisure and disposable income, and turned to other forms of recreation such as sport, music halls and cheap seaside trips.[13] In the early years of the twentieth century the first provisions of the welfare state reduced the need for mutual self-help. Trade Unions became legal, working men obtained both the right to vote and a Labour party to represent them. It is perhaps unsurprising that in the face of competition from the state, Friendly Societies surrendered to the inevitable and declined into relative obscurity. Nowadays, few have heard of the Free Gardeners.[14]

Dr Alison Baxter (@AlisonRBaxter) is a writer and independent researcher with a particular interest in the Victorian era. Her PhD thesis (Oxford Brookes 2019) examined the boundaries between fiction and nonfiction when writing about the everyday lives of ordinary people. Her book about the Dupens, A Cornish Cargo: the untold history of a Victorian seafaring family, was published in 2020. More information about the Dupens appears on her website Victorian Lives.

Thanks to Dr Simon Wenham (@SimonWenham) for his encouragement and feedback on a very early version of this article.

[4] Trevor Powell, ‘A Brief History of the Rise and Fall of the Ancient Order of Free Gardeners’ https://www.freimaurer-wiki.de/images/e/ef/Free_Gardeners_by_Trevor_Powell_on_mastermason-com_email-masons.pdf ‘The Free Gardeners’ historyshelf.org https://sites.scran.ac.uk/shelf/free/02.php

[14] The website of the International Order of Free Gardeners lists some 17 lodges across the world while the Hanging Gardens of Babylon, names just 13, mainly in Scotland.