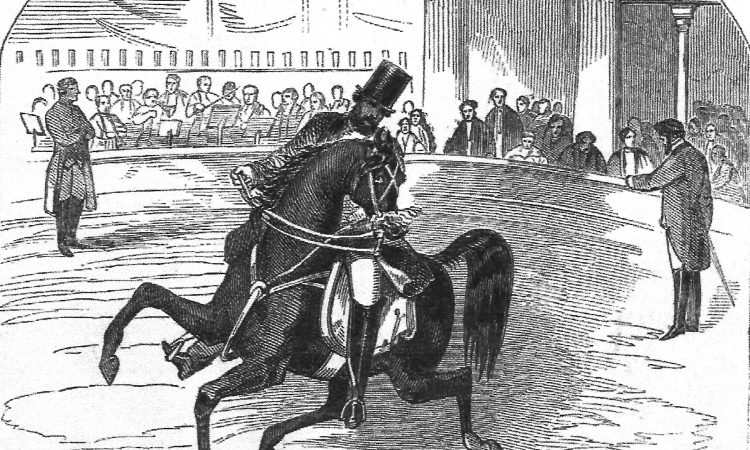 The circus has always been, and still is, inclusive by nature. The ‘modern’ circus, founded by Philip Astley over 250 years ago, was underpinned by a wealth of talented black performers. Some became famous in their own right, and were very much in the public eye; their names became household words. Some had just a single named reference in an advertisement, and others were just mentioned by their ethnicity. What has to be remembered, applauded, and celebrated is that in the circuses, music halls, and other performance venues of the Victorian era, black artistes were a very real presence. Although there were many, what follows is a brief overview of some of them.

Perhaps the most well-known is Pablo Fanque. Born William Darby in 1810 in Norwich, he is most celebrated for being the first black circus owner in Britain, if not the world, given the state of circus at that time.1 However, as described in a previous article, Joseph Hillier also took over the running of a circus the same month that Fanque launched his.2 I think that what edges Fanque to being the ‘first’ black circus owner is that he began his circus from nothing, whereas Hillier took over an existing circus. Fanque was a third generation black British citizen. Born in the workhouse, he was apprenticed to William Batty’s Circus at an early age before appearing as a performer in his own right. As a circus owner he is often pictured as an equestrian but he was also an accomplished acrobat and slack-rope performer in his early days. It was not until January 1842 that Fanque first presented his own company.3 He became very popular and toured widely, mainly throughout the north of England, although he did make an appearance at the famous Astley’s Amphitheatre in London in 1847.4 Fanque was well respected in society and regularly gave generously to charitable bodies. He was also a member of the Order of Ancient Shepherds, a ‘secret’ fraternal society affiliated to the Freemasons. He is perhaps most associated with the disastrous collapse of his circus in Leeds in March 1848 in which his wife died.5 She was buried in Woodhouse Cemetery, Leeds, and in 1871 when Fanque himself died, he instructed that his body be taken to Leeds to be interred with hers. Their graves are there today and are regularly visited. Fanque is indeed an iconic black figure within the cultural heritage of the circus. However, Fanque was not the only black equestrian in the Victorian circus. Newspaper reports of the time make reference to a character named ‘Snowball’, who was a rider of colour with Sanger’s Circus in 1867, and Joseph Austin, a black bare-back rider with Elphinstone’s Circus in 1889.

Anna Olga Brown, under the performing name of Miss La La, is possibly the most well-known black female performer of the period. She was an aerialist and was immortalised by the artist Degas when he sketched her in performance many times during the January of 1879. His famous depiction of her can be seen in the National Gallery in London. La La was born to an Afro-American father in 1858 in a city that was called Stettin at the time. It is now known as Szczecin in Poland. While much of her performance career was in France, she did appear in London in February 1879.6 Later, in 1883, La La returned to England, this time in an aerial duo called the ‘Black and White Butterflies’. Her partner, Kaira, was as fair as La La was black. La La married Manuel Woodson, who himself was an Afro-American contortionist. He went on to become the manager of a Variety Theatre in Brussels until his death in 1915. Little is known of La La after this date. She made several applications for an American passport and the last extant record of her is in 1919. There is no record of her ever having travelled to America and what became of her is unknown. Physically small she may have been, but Olga Brown was a larger than life character who, fortunately for us today, was immortalised as Miss La La in that moment of performance by Edgar Degas.

Carlos Pablo Paddington was another interesting character who first appears working for Cooke’s Circus in the 1820s on the Corde Volante. His heritage is not certain, but he was often referred to as ‘African’ or a ‘Man of Colour’. But Paddington had a secret – he was possibly a she! An article in the York Herald of 13 January 1827 exposed all. Paddington ceased working with Cooke’s Circus after this time but continued performing until the 1850s with a variety of circuses of the period; Adam’s, Samwell’s, Batty’s, Ryan’s, and Wallet’s to name a few. As well as performing on the Corde Volante he also appeared on the slack-rope and as an equestrian.

George Christoff was a celebrated black tight-rope performer. He was born George Frederick Christopher around 1828, possibly in south Wales. He was often billed as ‘Herr Christoff, the African tight-rope dancer’. His father, Kitt Christopher aka Signor Christoff, was also a performer and George and his younger brother John appeared with him when they were very young. George’s grandfather had been a mariner and it is possible that he arrived in Britain and settled there. George and John both became famous in their own right. George, as Herr Christoff, performed to much acclaim throughout Britain, being able to throw a somersault on the rope. John travelled to Australia with the illegitimate son of Pablo Fanque where he performed as an acrobat and an equestrian. He toured throughout Australia and New Zealand and remained until his death in 1872 in Sydney.

While ‘Chocolat the black clown’ was wowing audiences in Paris, in Britain Tom Handford was a black clown who worked the circuses and halls during the middle of the century.8 He was born in Manchester around 1835, his father, also born in Lancashire, being a publican. Handford was also known as the ‘Black Diamond’ and his act appears to have been a mixture of comic song, dance, eccentricity, and physical pantomime. He was well respected and by February 1863 he was the proprietor of his own Concert Hall. As well as working the halls, Handford formed his own company of entertainers and also worked with Barlow’s Circus, Pinder’s Circus, and with Swallow’s Circus throughout his career. He died on 2 June 1876 in Sunderland, after a long illness.9

Of all the circus disciplines, it was with lion taming that circus proprietors often specified a black performer when advertising for performers. During the nineteenth century there were many, and some became household names. Maccomo was one of the first black lion tamers. He either came from Angola or the Caribbean, depending on which history one reads. He was fearless in the lions’ cage and was injured several times during his career. For all his bravery, Maccomo took to his bed with rheumatic fever and died on Wednesday 11 January 1871, somewhere around thirty years of age. The name Maccomo re-appears a few years later with ‘Orlando Maccomo – the African Lion King’. There were other black lion tamers working throughout Britain. Delmonico was an Afro-American who came to Britain sometime around 1865, giving his first performance at the Crystal Palace in 1866. He worked with lions, tigers, and spotted hyenas. Delmonico was badly mauled in 1891 and had to give up performing with wild animals but he did continue working as an actor for a while until his death in 1901. The performing name of Alicamousa Sargano had several incarnations throughout the nineteenth century. The first to use this name was an Afro-Caribbean named William Dellah, when he worked with Sanger’s Circus around 1876. Another Afro-Caribbean named John Humphreys also used the name Sargano, as did Fijian born Jan Sargano. There were several other named black lion tamers throughout this period; Marcus Orenzo, William Beaumont, Charles Wood, Joe Foster, Dellah Montarno, Henry Porter, and Albert May (who also used the name Maccomo).

There were many other black persons who worked with the circus at this time, not necessarily as performers. There were grooms, foremen, musicians, watchmen, and other ‘circus workers’. Only a few achieved fame as performers and had their details recorded, others had but a passing reference in the newspapers. But what is abundantly clear is that there were many black individuals, as well as Asian, North African, and southern hemisphere performers, who underpinned the success and growth of the circus throughout the nineteenth century. These people are very often overlooked in the history of the circus, and we should celebrate their lives and the contribution they have made to our cultural heritage.

Steve Ward is a social historian and has written several books on aspects of the social and cultural history of the circus. If you are interested in discovering more about the individuals mentioned above, and others, his next book, Artistes of Colour; Ethnic Diversity and Representation in the Victorian Circus will be published by the Modern Vaudeville Press on 22 February 2021. See http://www.modernvaudevillepress.com/artistes/ for further details.