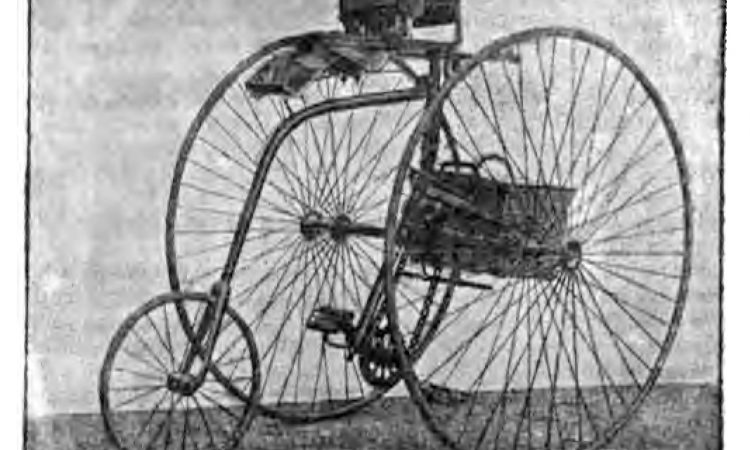 Starting in the late 1870s, the leisure opportunities of a growing body of affluent middle-class photographers were expanded by the development and mass production of new photography and transport technologies: the dry-plate camera and three- or four-wheeled self-propelled machines (tricycles or quadricycles). While the former had removed the need to attend to the glass-plate immediately before and after exposure, as was the case with the wet collodion process, the latter enabled a new experience of mobility as an alternative to the more dangerous to ride high-wheel bicycles (later dubbed ‘penny-farthing’).[1] Until the advent and market penetration of the two same-size wheeled ‘safety’ bicycles (1885) and of the film roll based compact cameras (1888), the combined use of these technologies thrived amongst amateur photographers.

As contemporaneous sources indicate, photographers who cycled were almost entirely unanimous in praising their reciprocal advantages. In 1884, S.H.R. Salmon, the secretary of the London Tricycle Club, wrote that: “As an old tricyclist and a two-year old photographic novice, I can most distinctively give it as my opinion that the two pursuits go most admirably together; in fact, neither is complete without the other.”[2] Harris Stone, the editor of the weekly Amateur Photographer, concurred: “Amateur photography and cycling – particularly tricycling – are, and must always be, most intimate associates”[3] – so much so that the illustration that the magazine chose for the front cover of all its bounded volumes between 1884 (volume I) and at least 1894 (volume XVIII) was that of a couple riding a tandem by a shore and of a camera mounted on a tripod on the foreground, with the suggestion presumably being that this is the camera secured to the back wheel of the tandem (figure 1).

British manufacturers sought to meet the growing demand of cameras and tricycles, each industry with an eye to both users. By 1884, the photographic press estimated that there were “four hundred kinds of tricycle in the market.”[4] Three years later, Viscount Bury and Lacy Hillier, co-authors of the Cycling volume of The Badminton Library of Sports and Pastimes, observed that “[t]he advertising columns of the cycling papers are full of announcements of photographic materials fitted for conveyance on tricycles.”[5] One of the main cycle manufacturers to adapt its machine to photographers’ requirements was the Coventry Machinists’ Company. For example, their “Imperial Club” tricycle (bottom left, figure 2) could be used with a tripod stand designed to fit to the tricycle’s framework and a “neat carrying frame … for the easy transporting of the complete [camera] outfit.”[6] The Birmingham-based J. Lancaster & Son, makers of photographic apparatuses “for tourists, bicyclists, tricyclists, etc..” specialised instead in the manufacture of cameras such as the Instantograph (top right, figure 3), favoured by photographers in the half- and quarter-plate format, and of appliances to release photographers from needing a tripod. As Harry Hewitt Griffin, the editor of Bicycling News, explained, Lancaster & Son “have recognised the importance of catering for cyclists. Their cameras can be attached to the wheel, by means of a readily adjustable clip”[7] (bottom right and left, figure 3).

The photograph that amateur photographer and cyclist Henry Smith sent with his article “Photography and Cycling” (figure 4) shows one such camera-cycle contraption. As he explained, “Upon a tricycle it is by no means difficult for an average man carrying his camera to ride from 40 to 60 miles a day, and that too without any fatigue.” To reduce the weight of luggage and thus increase ride comfort, he continued, “the tripod can be dispensed with if desired. The camera can be rested with perfect steadiness upon the saddle, which can be as flat from front to rear as the base of the ordinary tripod.”[8]

Riding a bulky tricycle while carrying fragile and rather heavy camera equipment, however, was not without its challenges. A typical photographic apparatus consisted of the camera body itself, lens(es), shutter, double dark slides holding two glass plates each, focussing cloth, and sometimes tripod. John Browning, treasurer of the London Tricycle Club, estimated that, depending on the size of plates used, the whole apparatus weighed between 10 to 50 pounds.[9] Additionally, vibration from the machine and dust, including that caused by the edges of the plates jolting in the slides while riding, led to pinholes on the sensitive plates. Yet none of this deterred most photographers from combining the two activities. The main reason for this was that the material engagement with these technologies enabled a new kind of freedom in mobility and, relatedly, visual experience that people genuinely seemed to treasure.

On the one hand, while train schedules and their routes curtailed photographers’ movements, the tricycle enabled a new spatial and temporal experience of one’s environment: thanks to the tricycle, photographers could control completely where to go and when to stop. Figures 5 and 6, two pages from a dismounted album, include the photograph of a man standing next to a Singer tandem (or sociable) tricycle on an otherwise unpopulated country lane that the caption places near Iford (Hampshire) (figure 5) and that of a woman sitting on what appears to be the same tricycle in the village, according to the caption, of Holdenhurst (Hampshire) (figure 6), perhaps intended to demonstrate that they had reached locations unfrequented by the masses.

On the other hand, travelling independently increased one’s chances of finding good subjects to photograph. Vincent St. George, for example, wrote in an article from 1885 that “None save the cyclist knows what lively little bits there are to be found in this charming isle of ours, far from the beaten track of city wheels.”[10] Similarly, John M’Kean, a member of the Edinburgh Photographic Society, observed in 1886 that “Should you find no charm as regards light and shade in the first object of your attack, you can pass on to the next without losing much time, leaving the first for the return journey, when the light may be more favourable.”[11]

Crucially, however, photographers’ use of the tricycle was appreciated not simply for its utilitarian value but, most importantly, because it enhanced the body and senses of their users, leading to new ways of moving and seeing.[12] Firstly, the tricycle was credited with more than increased mobility. For example, J.B.B. Wellington, an amateur photographer and a member of the Temple Bicycle Club, rhetorically asked:

After all, what is more exhilarating to both body and mind than to enjoy the fresh country air, to be spinning noiselessly along, no anxiety in running off to catch a train, no travelling expenses, no horse to keep, and always ready at a moment’s notice, and to get at the most out-of-the-way places, bringing home views which will never be forgotten, at the same time developing your muscles […]?[13]

The interaction with the machine was felt to have a positive – “exhilarating” – influence on one’s body and senses. Physically, because of that “fresh country air” that cyclists commonly contrasted with that of the polluted cities and of the exercise that “develop[s] your muscles,” and sensorially, because it fostered a perception of space and time as something that one mastered – “spinning noiselessly along, no anxiety in running off to catch a train … always ready at a moment’s notice.” Secondly, photographers agreed that the byproduct of this new experience of movement was a transformed experience of seeing. Cycling, as Griffin for example put it, enables a “speculative stroll” that gives “rein to fancy.” He explained:

Go to no fixed point; but leave the highway for the first favourable cross road; forsake that again for a lane, and, if only fit for traffic, you are sure to come on some subject to catch your fancy. It may be a farmyard, with picturesque old outbuildings, red-tiled barn, and animal life common to the spot, and with ivy-clad gable of the homestead on one side, while the other is filled in with some goodly-sized stacks. Perhaps it is a riven tree with broken and tangled branches – a legacy left by the last thunderstorm; perhaps a sylvan scene – purling brook, feeding cattle, &c. Let the subject “crop up,” as it were.[14]

The self-propelled machined facilitated an unsystematic movement through the landscape that, here as in the view of many other photographers at this time, could enhance one’s visual awareness of one’s surroundings. In other words, the technologically-enhanced experience of mobility produced new photographic possibilities – “Let the subject “crop up,” as it were” – that the moving photographer was in charge of and thus could choose from. This drifting is reminiscent of Guy Debord’s concept of urban derive,[15] a form of experiencing the city intended to resist the alienation and boredom generated by the capitalist society of the spectacle,[16] an implicit critique of the random wandering of the “flâneur who goes botanizing on the asphalt.”[17] To middle-class photographers, the combined use of cycles and cameras meant instead a new experience of moving and seeing, productive of a reinvigorating spatial and temporal awareness that they felt in control of, rather than passively subjected to. This was an appealing prospect for a group straddling the need to assert social conformity with the desire to free themselves from societal constrictions (including, as suggested above, from having to rely on train timetables or to visit sites popular with the emerging mass tourism). In this sense, then, we can say that the tricycle and the dry plate camera, early technological iterations of the soon-to-be ubiquitous ‘safety’ bicycle and compact camera, enjoyed widespread popularity not just because of their utilitarian possibilities, but because they fostered an autonomous experience of being in the world.

Sara Dominici (@saradominici_) is Senior Lecturer and Course Leader for the MA Art and Visual Culture at the University of Westminster, London. Her current research explores the wide range of photographic practices that shaped people’s experience of modernity from the late nineteenth century, focusing in particular on the significance that photographers’ interactions with other media, technologies, and infrastructures (e.g., different forms of transport, the postal system, the darkroom) had on the production of ways of being modern. She is the author of Reading the Travel Image(Routledge, 2018) and has published in titles including History of Photography; Photographies; Photography and Culture; Science Museum Group Journal; Source; and Trigger.