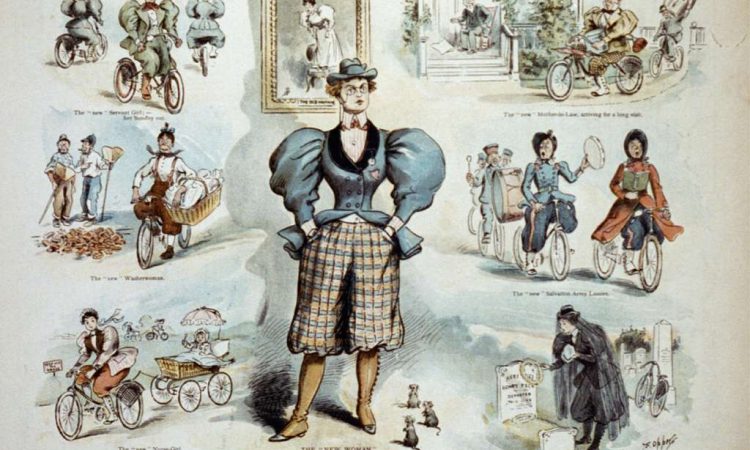 When one pictures Victorian advertising, a fairly consistent image springs to mind: that of trade cards depicting corset-clad white women alongside their respectable husbands and cherubic children. These advertisements are intended to ensnare the morally sensible “angel of the house,” and persuade her that a particular brand of soap or soup or other household product is guaranteed to enrich her family’s wholesome lifestyle. But the Victorian era also gave rise to two earth-shaking consumer products that were intended to transport the angel away from the home: the bicycle and the automobile.

Advertisements for personal vehicles took on a new life, designed to captivate the independent-minded woman—whether maiden, wife, or mother—and encourage her to imagine how mobility could improve her life. Though these images did sometimes appeal to the morally conscious, they also utilized cutting-edge illustrative styles and techniques to trigger women’s sense of adventure and to engage the self-reliant sensibilities of emerging suffragettes.

When Victorian-era advertisements for these two vehicles are compared, bicycle advertising emerges as the more visually engaging and colorful. Although modern bicycles and automobiles both emerged in the 1890s, bicycles were initially far more marketable owing to their low cost and cross-class appeal. In early bicycle advertisements, women are frequently the pilots of their own adventures, whereas women in advertisements for multi-passenger vehicles are frequently depicted beside or behind a male driver. Bicycle manufacturers boast their product’s “graceful lines.”[1] Their catalogs often employ the dreamy Art Nouveau illustrative style to communicate the bicycle’s grace as well as its capacity to transport the Victorian woman to any place she desires or imagines. Early automobile catalogs, arriving soon after, intensely market the motorcar’s power, comfort, and reliability (its beauty and grace falling to coachbuilders). While some automobile catalogs utilize imaginative, colorful imagery, it was not until the Art Deco era that a global aesthetic identity for auto advertising was solidified.

Designers of personal vehicle advertisements in the Victorian and early Edwardian eras often employ a persuasive mechanism that is still used in advertising today. By showcasing vignettes of life with their product, they enable the consumer to picture herself living an unadulterated ideal manufactured by the designer. In Figure 1, a 1907 postcard advertising J.A. Lawton coachbuilders, two opulently dressed women in furs emerge from the exclusivity and privacy of a closed car driven by a male chauffeur. Their ease and beauty fills the foreground of the illustration, while a chaotic scene unfolds in the backdrop: a coachman and stumbling horse facing off in the busy street. This advertisement paints the leisurely lifestyle of an automobile owner against the toil and agony of horse-drawn transport—a dichotomy especially resonant to upper-class women who may have been persuaded that the automobile was a cleaner, safer, and more reliable way to travel.

In contrast, Figure 2 positions the bicycle against the horse in a way that appeals more to working-class women. In this frontispiece for Columbia Bicycles’ 1895 catalog illustrated by Will H. Bradley, a bloomer-clad girl pilots her bicycle past a society woman riding side-saddle on an unruly horse. While the horseback rider fades into the distance, the confident cyclist travels head-on towards the viewer. She is the future, pedaling confidently ahead. The woman on horseback is the past, gripping the reins while staring enviously at the modern woman and her technologically superior mode of travel. Concerned more with practicality and usability than with cleanliness and status, advertisements for a working-class female clientele glorify female independence and highlight how the bicycle might improve the otherwise taxing day-to-day travels of the working girl.

Victorian bicycle and automobile advertisements depict the possibilities of life for women outside the home. But whereas bicycle advertising appeals to the self-reliance of working class women and early suffragettes, automobile advertising relies on the expansion of the domestic sphere, to showcase leisure-class women traveling in comfort. Bicycles were a uniquely democratizing product, marketed equally to women of all classes and depicted as swift, cutting-edge, and easy to maintain for women who dared not tinker. Contrarily, though automobiles were accessible to women, they were often condemned among the classes that could afford them, who derided the “horrid machinery” within.[2] Thus, the appeal of automobiles to women was dependent upon the fantasy of a worry-free lifestyle, in which one could take the comforts of home along on their travels and hire a chauffeur to operate and maintain their vehicle. That a car could be a symbol of wealth was ample fuel for advertisement designers. The motorcar was transformed into a symbol of opulence, heralded by images of graceful, luxurious women. Simultaneously, cycling advertisers transformed the bicycle into a symbol of adventure and women riders into progressive, imaginative trendsetters. Examining two of the first products to give women freedom of movement enables us to better understand both the democratizing and domesticating powers at play in advertisers’ appeal to the Victorian angel of the house.

Sarah Bilotta is Assistant Cataloging Librarian for the Peabody Essex Museum and Library and Research Fellow for the Museum of Russian Icons. Her research focuses on depictions of women in western advertising art from 1890-1945. She is on Instagram and Twitter at @sarahebb_.