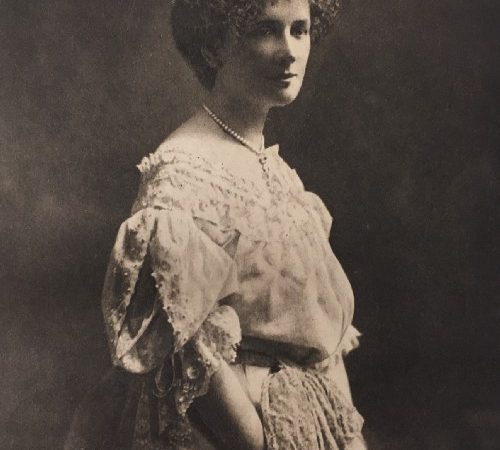 Flora Shaw was a journalist and Colonial Editor of The Times, 1893-1900. She secured this position due to a widely praised series of ‘Letters’ from South Africa, penned during the first of a number of visits to South Africa, Australia, and Canada in the following decade. Shaw visited South Africa and Australia in 1892-3, Canada and the Klondike in 1898, and South Africa in 1900 and 1902. Shaw was an evangelising imperialist, as Dorothy O. Helly and Helen Callaway have demonstrated.[1] This is a view supported by Shaw’s contemporary and imperial traveller Mary Kingsley, who considered her ‘imbued with the modern form of public imperialism. It is her religion.’[2] Kingsley and Shaw were rivals, and Kingsley was firmly opposed to Frederick Lugard’s policies in West Africa, which Shaw vocally supported, marrying Lugard in 1902. Kingsley remarked in a letter to John Holt that she would have liked Lord Lugard to ‘drown… in his own ink pot’.[3] The anti-imperialist Wilfred Scawen Blunt considered Shaw to be ‘really the prime mover in the whole thing’ during the Jameson Raid of the Transvaal in 1895-6.[4] Shaw used these articles from her trips to empire, as well as a fortnightly “Colonies” column, to promote emigration, investment, and interest in the empire at every opportunity.

Professionalism, research, and writing in the detached male voice of The Times was the key to being accepted in the deeply masculine world of imperial politics and journalism. For this, Shaw was praised by Lord Cromer for the ‘lucid, detailed and absolutely correct’ nature of her financial reporting. He deemed her ‘probably better informed on colonial affairs than any other London journalist, and than any other lady in England except the Queen’ as The Englishwoman’s Review proudly noted in 1893.[5] As a correspondent for The Times, Shaw was accorded interviews with prominent political people in the colonies such as the President of the Transvaal, Paul Kruger, and the Premier of Queensland, Sir Samuel Griffith, who called on her during her first morning in Brisbane.[6] The Premier of South Australia, Sir John Downer, had dinner with Shaw whilst she was in Sydney and she stayed with local luminary, judge and politician William Charles Windeyer, along with the Premier, over Christmas 1892.[7] Her travel was unaccompanied, although she did briefly have companions at different points, as well as guides provided, such as those who took her down Broken Hill mine in Australia.[8]

Shaw remarked on numerous occasions about the difficulties of propriety as a woman of status whilst travelling, especially in relation to her appearance. She recounted a tale to her sister, Lulu, of how on a train in Queensland in the blistering heat, her dress caught fire and was only put out by her male companion grabbing the outer layer of her dress in his hands to extinguish it, burning his hands in the process. Shaw was then concerned to ‘safeguard the dignity of The Times in the person of its correspondent by holding my truncated garments together as respectably as I could.’[9] Similarly, when traveling near the frontier in South Africa on a bullock wagon she had dreamed of a hot bath, but when she ordered hot water at her accommodation, she was given the water which had been boiling the fish, a ‘milky, odiferous liquid’ at which, she confessed, ‘her nerves gave way, and […] she sat on the bed and cried.’[10]

The politics of gender in late nineteenth-century Britain meant that Shaw could use these trips to further her arguments concerning emigration. If she could make the trip to the gold fields in the Klondike in 1898 then so could investors and emigrants. As she put it in a speech to the Royal Colonial Institute, she had been warned ‘of terrific hardship’ and that ‘it was necessary not only to carry a revolver, but to be prepared on occasion to “shoot quick”. Nevertheless, Shaw proclaimed her journey there safe and surprisingly easy. ‘I had not been three days in the country before I realised that a revolver was about as likely to be useful as it would be in Piccadilly. In the presence of untamed nature all humanity is friendly.’[11] This trip was widely reported both locally and internationally, with The New York Times, reprinting an article from the Montreal Herald, marvelling at her making this trip ‘without female companions and without reliance on other than her own indomitable spirit.’[12] The Women’s Penny Paper in London likewise remarked upon the speech, and the potential of the gold rush, in terms of the chivalry she encountered on her journey there, and quotes approvingly how the men’s carelessness with gold meant that, ‘as in other movements, man wins the battle, but woman holds the field.’[13]

Nevertheless, Shaw’s enthusiasm for emigration and the prospects of empire left her open to mockery. Her recommendation in 1898 that women should emigrate alongside men, and men should take their sisters to aid in the home-making tasks of empire, received criticism. As a letter to the Morning Post put it, she was recommending ‘that Englishmen should make absolute slaves of their sisters.’[14] Shaw’s enthusiasm for emigration to Australia in the 1890s, after severe financial shocks had rocked the colony, provoked derision in the London press. In 1894, after a speech to the Royal Colonial Institute, the first to be given by a woman, on ‘The Australian Outlook’, Shaw was accused of having ‘too much zeal!’ by Punch.[15] Her link to South Africa and the Jameson Raid remains Flora Shaw’s most notorious imperial episode. In 1897, during the investigation into the Jameson Raid, Flora Shaw was called before a parliamentary committee to answer for her role in the instigation of the raid. As Shaw had travelled across the empire, and the dramatic details of the Jameson Raid intrigued readers worldwide, this was noted in newspapers from London to Australia. Australian newspapers placed this within the context of Shaw’s Australian travels, ‘producing clever sketches from very superficial material’ as the Australian Star acerbically noted. This newspaper noted that Shaw’s feathers were ‘unruffled’ but that she had been, quoting ‘Zed’ from the “Star” ‘a Flora for the lot of them’ as she acted as the go-between for Cecil Rhodes and Joseph Chamberlain to plan the raid. The tone of disgust at the meddling woman was evident and is conveyed in their sketches of ‘Miss Flora Shaw’ looking like the archetypal shrewish spinster (see figures 4 and 5).[16] But this was not universal, and in London the legal writer Sir Herbert Stephen wrote to her after her evidence on 25th May that, ‘I observe with some amusement the mild astonishment of the ingenious reporters at discovering that you were not a frump.’[17]

Flora Shaw was an imperial enthusiast, and she pushed the boundaries of what was acceptable for a woman in her support for the empire. Intelligent, professional, and keenly supportive of an imperial worldview, she rose to the pinnacle of her profession and helped shape the tone of Britain’s jingoistic fervour in the 1890s and 1900s.

James Watts (@JamesNeilWatts) finished his PhD on imperial enthusiasm, travel writing and communication at The University of Bristol in 2020. His research focuses on imperial communication in the British Empire in the late nineteenth and early twentieth centuries and is becoming more interested in ideas of how travellers depicted landscape, and the tensions between travellers’ depictions compared to lived experience. He has recently published an article about Flora Shaw and her depictions of imperial landscapes, ‘Terrifying and Powerful, Fertile and Homely: Flora Shaw and “England” in Representations of the Imperial Landscape, 1890–1904’, in the Journal of Imperial and Commonwealth History.

[8] (From our special correspondent.). “Letters From Australia.” The Times, 14 July 1893, p. 3. The Times Digital Archive, tinyurl.galegroup.com/tinyurl/4HZd55. Accessed 30 Jan. 2017. Broken Hill was the basis of the modern mining conglomerate BHP Billiton, the BH standing for Broken Hill.