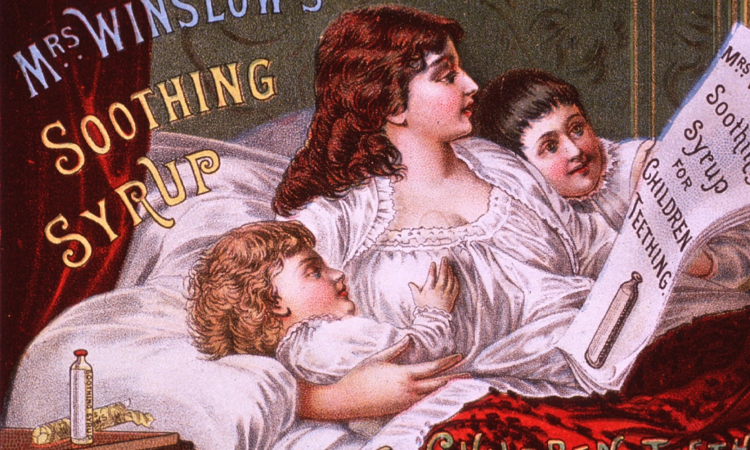 In the first half of the nineteenth century, many opiate preparations were marketed towards females. In fact, many were branded using the names of women, for example: ‘Mrs Winslow’s soothing syrup’ and ‘Mrs Bailey’s quieting syrup.’ Hardly surprising then that opium, particularly laudanum, was a popular choice for women for most of the century. The mass production of opiates in this way shows how society gave credence to the idea that opium and laudanum were able to relieve most ailments. As many articles in the British Medical Journal show between 1840-1900, laudanum was prescribed as a pain reliever for various reasons including labour pains, gout, nervous afflictions and rheumatic fever.[1] As many of these ailments could not be cured, they were simply alleviated with the help of laudanum. As these preparations were often sold and administered without any medical advice, more and more people became addicted to them. It also meant that in some cases, people suffered iatrogenic effects, namely that the side effects from taking opiates to alleviate a condition could result in the user becoming more ill, often suffering crippling withdrawal pains if usage stopped.

As many of these medicines were advertised to be a cure-all, they were often administered to children, sometimes with devastating consequences. One such preparation, Atkinson & Barker’s ‘Royal Infants Preservative’, claimed to have ‘been acknowledged as The Best Medicine in the World’ claiming to relieve everything from teething to whooping cough and stating ‘it is highly recommended and frequently prescribed by the faculty and may be obtained of the quality as supplied to Her Majesty.’[2] What better reassurance for Victorians than the knowledge that the Queen herself used this magical cure-all? For the working classes, it was often used to subdue their children with the added benefit of warding off their hunger. Many dosed their young before leaving the house to start their working day as the drowsiness that laudanum produced meant they could leave them unattended whilst the parent worked, without the worry that they would cause mischief or worse. The iatrogenic effect had dire consequences for children who were given laudanum. As it suppressed their appetites, even when food was available for them, they would not eat, therefore they often became malnourished and as a result, died of starvation. This, along with accidental overdose, became one of the largest causes of death in infants and children in Britain during the nineteenth century.

In Charlotte Mary Yonge’s The Daisy Chain (1856) we see the decline of an infant due to this process. Flora, the infant’s mother, writes to her father describing her child, stating ‘I never knew a child sleep as she does.’[3] An innocent statement in itself, but unbeknown to her, the child’s nurse had for some time, been administering laudanum to the infant. Flora goes on to say, ‘there is a sleepiness about her which I do not understand, and, when roused, she is fretful, and will not be amused. There is a look in her eyes which I do not like.’[4] Recognising these as symptoms of opiate use, her father then visits the child and after looking in on her he declares, ‘this is the effect of opium!’ adding ‘we must try some stimulant directly […] what have you nearest? “Godfrey’s Cordial, Sir” quickly suggested the nurse.’[5] How remarkable that the stimulant suggested to revive the child is the same drug that causes her fatal decline.

As the situation unfolds, it is deemed that the child ‘has been destroyed by opium’ and the infant dies.[6] The nurse who administered the drug, Preston, is beside herself with guilt, and the narrator of the novel states ‘she had not known that the cordial was injurious, deeming it a panacea against fretfulness, precious to nurses.’[7] There are many similar cases reported in newspapers throughout the century, thus showing that Yonge’s representation of infant-doping was reflective of social reality of the period.[8]

The use of laudanum was widely accepted for ladies of a certain class and many prominent females of the period wrote of their use of it with high regard. It was not unusual for upper-class female literary figures to write of their experiences with laudanum. Sara Coleridge did so in her poem, ‘Poppies’:

she drinks the poppy’s juice;

that liqor soon can close her eyes

O’ then my sweet my happy boy

will thank the poppy flower,

which brings the sleep to dear Mama

Elizabeth Barrett-Browning also wrote of her reliance upon opium in her letters to her then fiancé Robert Browning. She states’ ‘I think better of sleep than I ever did, now that she will not easily come near me except in a red hood of poppies.’[10]

For the most part, this kind of opiate use was seen as nothing more than a medicinally orientated habit, even though for many it was a dependency or addiction. It took until the Pharmacy Act of 1868 for the sale of laudanum and other opiates to be restricted to qualified druggists and chemists, stating that all opiate bottles should be labelled as poison. As such, by the time they were included in the Pharmacy Act, the general public were becoming more and more aware of their detrimental properties and fatal effects. This restriction on the sale of opiates reflected a growing perception of opiates as harmful rather than remedial or curative, and sales of these once popular remedies began to decline.

[10] ‘The Letters of Robert Browning and Elizabeth Barrett-Browning, Vol 1, 1845-1846’ retrieved from: http://digitalcollections.bayloredu/cdm/landingpage accessed on: 14th March 2018