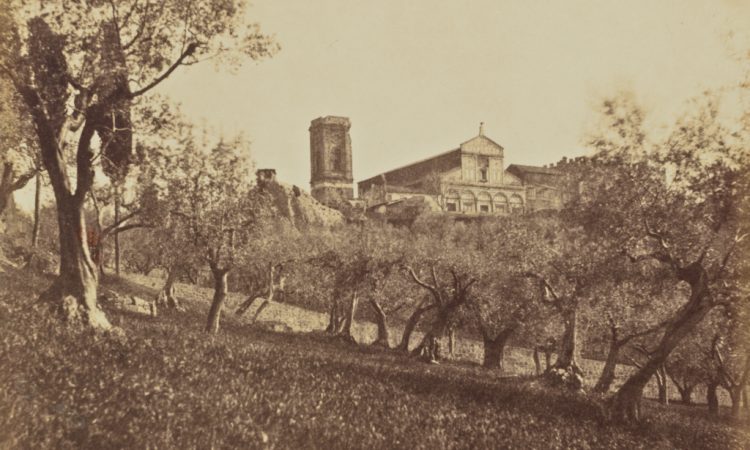 In September 1835, Constance Talbot wrote to her husband asking if he would be taking his small experimental “mousetrap” cameras on a visit to Wales. She remarked, “It would be charming for you to bring home some views.”[1] Four years later, William Henry Fox Talbot announced his invention of Photogenic Drawing at the Royal Society, London, and started the extraordinary creative phenomenon we know now as positive / negative photography.

We all take photography for granted: it’s an indispensable, ubiquitous part of daily life, but to mid-Victorian intrepid travellers it was a revelation. The camera obscura had been the travelling companion for those wishing to record the views greeting their arrival on foreign shores, but this optical device required an element of artistic dexterity. After 1839, a tourist memoir could now take visual form using a photographic camera: distant places captured on light-sensitive paper or glass, by the magic of the sun.

Women adopted photography from its earliest days, recognising its potential to capture a faithful likeness of their chosen subject without artistic embellishment, alteration or interpretation. But travelling with early photographic equipment required a generous luggage allowance of its own to accommodate the necessary extensive technical paraphernalia now contained within a diminutive mobile phone.

The first few decades following photography’s invention necessitated that any amateur or professional multi-task as both chemist and artist, transporting camera, tripod and cocktail of assorted chemicals to their chosen location. Inevitable constraints of long exposure times due to the poor light sensitivity of early photographic paper or plates led to a preference for stationary objects including architecture or landscape views, spawning a new genre of illustrated travelogue.

As Franziska travelled throughout Switzerland with her camera, Austria’s Ida Pfeiffer prepared for her second adventure following a memorable unaccompanied excursion to the Holy Land.[3] Disregarding the many hazards of solo travel, Pfeiffer ambitiously chose Iceland for her 1845 expedition “because I hoped there to find Nature in a garb such as she wears nowhere else.”[4] Ida’s box containing Daguerreotype apparatus was “looked upon with an eye of suspicion” by customs officials unfamiliar with photography and no doubt added to the significant difficulties of an independent woman travelling alone.

Closer to home, Welsh photographer Mary Dillwyn incorporated friends and family into her photographic records of visits to the scenic coastline of Wales, using a small camera to capture the fleeting, unplanned moments of a day out. Mary’s images display an informality combined with careful composition, displayed in her photograph at Three Cliffs Bay and a picnic with friends at Oystermouth Castle.[5]

Perhaps guided by John Murray’s 1853 handbook for travellers in Italy, Jane Martha St John recorded her visit in paper negative, photographing popular landmarks throughout her continental journey.[6] Jane travelled with her husband and her camera, evoking echoes of the artistic Grand Tour, producing over one hundred images throughout her European sojourn. The viewer remains unaware of the significant technical challenges associated with hot temperatures or the cumbersome weight of her equipment, exacerbated by a Victorian lady’s unforgiving clothing. She visited many destinations familiar to the modern traveller including Genoa, Naples and the leaning tower at Pisa.[7]

Formal images of historic Italian landmarks are occasionally reframed, or taken from a different vantage point. In an innovative experiment, Jane attempts to provide scale for her view of the Colosseum in Rome, taking advantage of the long exposure time to include herself in the photograph.[8] Jane’s solo Roman excursion is a remarkable example of technical skill resulting in an early holiday photographic self portrait.

Mr and Mrs St John also travelled to Florence, where Jane composed a study of the Romanesque San Miniato al Monte, rising majestically from a steeply sloping olive grove. Once again, her isolation of architecture juxtaposed with nature achieved an image of high creative impact.[9]

Jane and her female contemporaries overcame many creative challenges on their mid-nineteenth-century travels with a camera. Their legacy enables twenty-first-century tourists to travel both distance and time, recapturing the eternal and ephemeral from the first two decades of photography.

[6] John Murray (Firm). 1853. A handbook for travellers in Northern Italy: being a guide to the states of Sardinia, Lombardy and Venice, Parma and Piacenza, Modena, Lucca, and Tuscany as far as the Val D’Arno. London: J.  Murray.