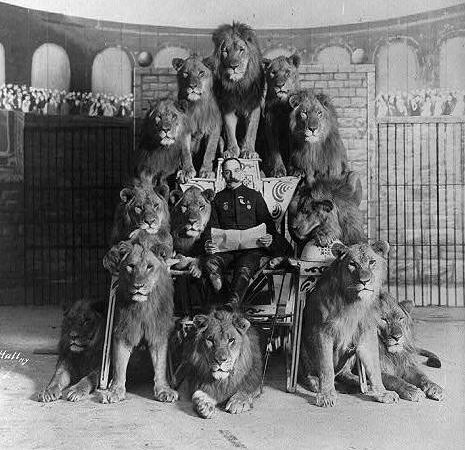 If one thinks of Scotland and zoos, the Edinburgh Zoo automatically springs to mind. This zoological park opened in 1913 and is world-famous for its captive breeding programme and conservation work. However, it was certainly not the first zoo in Scotland. This credit must go to the Scottish Zoo and Variety Circus, established in Glasgow in 1897 by Edward Henry Bostock.

Born in 1858 in Buckinghamshire, Bostock came from a family of menagerie owners. Collections of wild and exotic animals had been seen in England as far back as William the Conqueror, who had a small royal menagerie. In the twelfth century, Henry the First kept a collection of animals at his palace in Woodstock and King John later established a menagerie at the Tower of London, a collection that continued there until 1825.

It was not until the late eighteenth and early nineteenth centuries that travelling menageries, run by showmen, became popular throughout the country. One of the largest was run by a man named George Wombwell. At its peak, Wombwell’s Menagerie had three outfits touring the country. It was a James Bostock, a waggoner with Wombwell’s, who married the boss’s niece Emma and first brought the names of Bostock and Wombwell together when he set up his own menagerie in 1867. The Bostock & Wombwell Menagerie was now the largest in the country. Upon James’s death his widow continued running the menagerie, in which her son Edward was now working. By 1883 he had established his own outfit: E. H. Bostock’s Grand Star Menagerie. Eventually he bought his mother’s outfit in 1889 and went on to tour throughout Scotland in 1894, visiting ‘almost every town from Berwick to Wick and Thurso, even exhibiting at Mey, which is only five miles from John O’Groat’s House’. [1]

He toured widely until 1896 when, on medical advice, he retired to Norwich where he established a static menagerie. However, having toured in Scotland several times, he realised that the country had no permanent zoo and that if he could acquire the right premises it could be a significant commercial investment. Early in 1897, the Eastern Daily Press of 17 February reported a statement from Bostock about his new venture:

Having taken a lease of the Olympia, New City Road, Glasgow, it is my intention to open the same in May in first-class style as a “Zoo” for Scotland, and with it combine a circus performance. Scotland has for a long time been behind other countries in this respect … with my previous experience I hope to inaugurate a collection of beasts, birds, and reptiles, that will do credit to any country … I am in a position to vary the exhibits from time to time, and this gives me an advantage over those who have one resident collection and speculate very little in dealing … The opening will be under distinguished patronage, and the entire proceeds of the first exhibition and performance will be given to the Western and royal Infirmaries.

After extensive refurbishment, the Olympia building opened on Wednesday 12 May 1897 as The Scottish Zoo and Variety Circus under the patronage of the Lord Provost of the city. Bostock was very astute in the way he planned the venture to provide the ‘only permanent place of amusement of its kind in Europe’. The Northern British Daily Mail of 12 May goes on to describe a colourful scene in which the building had been thoroughly

CLEARED, FLOORED, PAINTED, DECORATED, AND ILLUMINATED BY ELECTRIC LIGHT, while the entire building is surrounded with Strong Cages for the reception of the Denizens of the Forest. Palms and other Plants, Fountains, &c., have been added, turning the Huge Building at once into a High-Class Educational Institution and ZOOLOGICAL PROMENADE. No more suitable establishment could be opened in Scotland to commemorate the Queen’s Diamond Jubilee than the SCOTTISH ZOO … THE ZOO offers practical opportunities for Zoological research in one of the most complete collections in Britain. THE LIONS, TIGERS, LEOPARDS AND OTHER SAVAGE ANIMALS have been trained to perform in a most remarkable manner, and will serve to illustrate the supremacy of man over the brute creation. CHILDREN WILL BE ABLE TO ENJOY A RIDE UPON THE ELEPHANTS, CAMELS, DROMEDARIES, ZEBRAS &c.

The Zoo was open daily, from 11am until 10.30pm, at a charge of one shilling for adults and six pence for children (sixpence for all after 6pm). Performances with the animals were three times a day, and feeding at least once daily. But there was to be more – Bostock combined the ever popular circus with his zoo. In the centre of the building he constructed an entirely separate circus venue. Visits to the circus were optional, at the price of two shillings for Reserved Seats, one shilling Pit and Promenade (children half price), and sixpence for all classes in the Gallery, with three performances a day. It was a permanent circus that drew a wide range of skilled artistes from around the world. Bostock spared no expense and his first season ran unbroken for almost a year. And here was his clever marketing ploy: ‘No Person can visit the Circus except those passing through the Zoo’. So, if you wanted to watch the circus, you had to pay to see the zoo first!

It was not long before Bostock added a more diverse range of animals to his collection. There was Linus the Oregon Wonder, a horse with a tail seventeen feet long and with a double mane. On a Naval Day, held in September, Bostock showed a walrus, a young polar bear, and a sea-horse (the only specimen ever exhibited in Scotland). In 1898 he added a chimpanzee, which he advertised as ‘Darwin’s Missing Link’, and in 1900 he was offering seven polar bears. Bostock even displayed the body of his dead elephant ‘Sir Roger’ for viewing – a must for all to see! In 1900 he introduced a dog-faced baboon named ‘General Snyman’,

The Monkey that so ably assisted Baden-Powell in watching over Mafeking, and who displayed so much intelligence during the famous siege. His principal duty in the Beleaguered Town was to Ring the Alarm Bell the moment the Boers commenced firing, thus giving warning to everybody to take shelter in the Bomb-Proof Erections. [2]

Bostock provided more than just a zoo and a circus. There were organ recitals and string bands, and during its closed period the circus was turned into a concert hall. Always willing to embrace the new, Bostock presented ‘Prof. WATSON’S NEW CINEMATOGRAPH, absolutely the Largest and Best Animated Pictures ever produced in Scotland.’ [3] The following year he advertised ‘THE IMPERIAL BABY INCUBATORS, are, by arrangement, now on view at the Zoo. ACTUAL LIVING BABIES BEING REARED. DOCTOR AND NURSES IN ATTENDANCE.’ [4]

There was something for everyone: comic water pantomimes and yacht races in the flooded arena, re-enacted prize fights, holiday performances by hundreds of children. With some justification, Bostock was able to advertise his Scottish Zoo and Circus as The National Amusement Institution of Scotland.

In 1902, Bostock went into partnership with Tom Barrasford and they redeveloped the Olympia building into the Glasgow Hippodrome. The circus-variety and zoo were now separate but connected by a corridor. The partnership lasted for only two years and in 1904 Bostock took sole control of the enterprise. He then began to build his own variety empire, opening up several new Hippodromes around the country, including one in Paisley and another in Hamilton. He also bought the Royal Italian Circus. But animals were always his passion. He was a Fellow of the Royal Zoological Society and often donated exotic animals to universities and institutions for scientific purposes. Glasgow Corporation had been considering establishing a zoological park at Rouken Glen, and in 1909 Bostock offered them his collection at auction for something in the region of a 40% discount. For some reason they declined the offer. By 1914 the plan had resurfaced, but the war intervened and the plan was put on hold. During the war the Hippodrome and Zoo were used as a troop billeting centre and later an aeroplane store. At the end of the war Bostock returned his menagerie to half of the building, the other half given over to roller-skating. But the end was near. On 16 July 1919, The Port-Glasgow Express printed this notice:

The Scottish Zoo Buildings, so long associated with the name of Mr E. H. Bostock, have been sold, and will immediately be converted into a motor repair depot and garage.

And so Scotland’s first zoo came to a close. Bostock continued with his touring menagerie, providing Christmas entertainment in Kelvin Hall for several years. In 1932 Bostock announced the retirement of the menagerie, and his collection was sold to London Zoo. It was not until 1947 that a zoo was finally opened in Glasgow – fifty years after Bostock’s success with the Scottish Zoo and Circus.