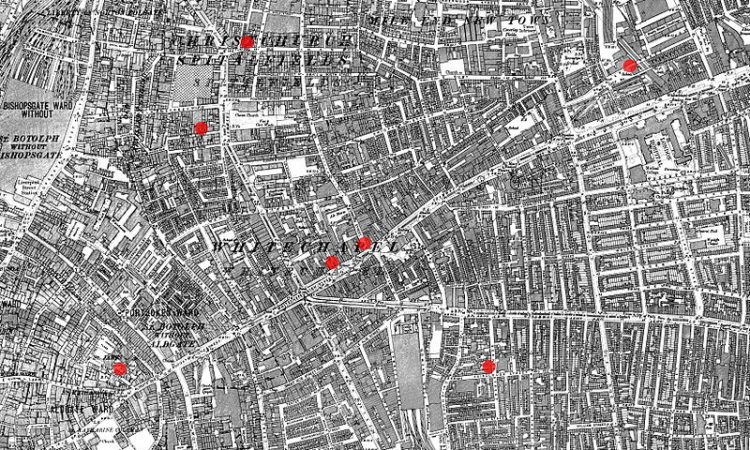 It wasn’t the best of times, and it wasn’t the worst of times. For Polly Nichols, Annie Chapman, Elisabeth Stride, Cate Eddowes, and Mary Jane Kelly, Whitechapel, London in 1888 was the end of times.

Known as “the canonical five” of Jack the Ripper’s victims, these women—largely invisible to London culture during their lives—can’t rest in their deaths. For 130 years writers, criminologists, armchair detectives, filmmakers, and artists have studied and reproduced all of the blood-soaked details of their murders for popular consumption. If 19th-century London overlooked them as members of the impoverished masses in the East End, since that time they have been part of the notorious legend of Jack the Ripper, a household name even now.

2019 produced two new analyses of the Ripper’s 1888 crimes. The BBC released Jack the Ripper: The Case Reopened, hosted by Emilia Fox from “Silent Witness” and criminologist David Wilson, and Hallie Rubenhold published The Five: The Untold Lives of the Women Killed by Jack the Ripper. While “Jack the Ripper: The Case Reopened” largely treads the common ground of coroners’ reports and newspaper articles from the period with a 21st-century forensic spin for the true crime audience of cable television, Rubenhold approaches the case differently.

Uninterested in the impossible task of discovering the identity of Jack the Ripper, Rubenhold—a historian—manages to reveal the true identities of his ignored victims. A task, that as it turns out, wasn’t impossible; it was just uninteresting to the generations who could have taken it up before.

Answer: A serial killer who terrorized London in 1888—his true identity was never discovered.

Answer: If you said prostitutes, you are 3/5ths incorrect.

This is Rubenhold’s most startling and surprisingly controversial discovery. There is no evidence that Polly Nichols, Annie Chapman, and Catherine Eddowes were sex workers at any time during their lives. Elizabeth Stride did work in a brothel in Sweden when she was young (she was 45 at her death), but she may or may not have worked as a prostitute in Whitechapel. Only Mary Jane Kelly regularly engaged in prostitution.

This discovery upends the 130-year-old narrative of the Ripper’s crimes; Rubenhold even insinuates that the sexist oversight and stereotyping of impoverished women in 1888 may have allowed the serial killer to elude discovery as the police isolated their search to a “killer of prostitutes.”

A startling enough insight in itself, but Rubenhold offers something more: she restores these women’s real identities. By researching countless archival documents, she tells us where these women were born, who they loved, where they lived, and the hardships they faced during their lifetimes. Refusing to republish the infamous post-mortem photographs so easily found on the internet, instead she includes photographs that would have been dear to them during their lives. Wedding photos and photos of their children (yes, many of these women were wives and mothers) fill the middle pages of this book.

In failing to accurately represent these women to the public, Rubenhold argues producers of true crime narratives “fall back on arbitrary supposition informed by Victorian prejudice;” we “have figuratively stepped over the bodies of those he murdered, and in some cases, stopped to kick them as we walked past.” She asserts that the mythology of Jack the Ripper as a killer of prostitutes serves to make this “vicious series of murders slightly more palatable” to what is still a deeply sexist and patriarchal society, but that we must move past this mythology, because “Jack the Ripper is a narrative of a killer’s deep, abiding hatred of women, and our culture’s obsession with this mythology serves only to normalize” this “particular brand of misogyny.”

Should you want an example of Rubenhold’s point, watch the inaccurate and reliably sexist recounting of the crimes offered by the BBC in Jack the Ripper: The Case Reopened. Or, don’t.

Ostensibly an investigation into the Jack the Ripper “cold case,” The Case Reopened applies forensic science, such as geo-profiling, digital autopsies and crime scene replications, and profiling to the coroners reports from the cases and “eyewitness testimony” recounted in the periodical press. Problematically, they do not consider the accuracy of the latter source materials, which, as Victorian scholars know, presents a problem since “fake news” abounded during this period, especially for such a sensational case as Jack the Ripper’s. Even the Ripper’s name derived from what is now considered inauthentic letters from the killer which were, in fact, penned by a journalist seeking to sell papers.

But much more concerningly, “the Case Reopened” capitalizes upon the bodies of Jack the Ripper’s victims.

Not only does The Case Reopened show the original photographs of the victims’ bodies and Mary Jane Kelly’s crime scene, but one of their “scientific” tools is a digital autopsy table where they can reproduce the lifeless bodies of the women and show audiences the wounds on a to-scale bodily reproduction. To make the first of these scenes—a portrayal of Polly Nichols– exciting for the audience, Fox cringes and makes uncomfortable faces while saying that wounds to the genitals must imply a “sexual” motive in the killer to which Wilson agrees, intimating that the killer must “have been trying to achieve something.” As an audience, we can guess what that “something” is in Wilson’s mind.

Moreover, despite calling this show an “investigation,” producers must have done little investigating into the women the Ripper killed, because they reproduce the same exploitative inaccuracies about the “lifestyles” of these women which have pervaded the narrative for generations. Casual sexism overwhelms Fox’s and Wilson’s suppositions. Discussing a supposed eyewitness account of Annie Chapman shortly before her death in which she was seen talking to a man, Fox states “so Annie knew she was about to have sex [for money].” Similarly, when discussing Martha Tabram, the first Ripper victim according to The Case Reopened, though not one of the canonical five, Fox says Tabram was destitute, to which Wilson replies “so she was a prostitute,” presupposing that poverty inevitably resulted in sex work for women and reinforcing the Victorian mores which suggest that when a woman leaves her role as Angel of the House to walk the streets at night, she exposes herself to violence.

Indeed, long before Rubenhold, Judith Walkowitz described the “mythic story of sexual danger” attached to the Ripper coverage during the Victorian period. Essentially, journalists and social critics used stories of the Ripper’s crimes to control female behavior. One feels compelled to ask, then, if broadcasts such The Case Reopened—and literally every other true crime account of the Ripper case I’ve seen—seek to curtail female independence even now.

It’s not just Jack the Ripper coverage, either. In continually rehashing these violent male-on-female crimes, from Jack the Ripper to Ted Bundy, does the true crime genre implicitly reinforce confines for female behavior, warning women that anytime they leave the house alone, they are exposed to a killer’s lust? Especially since portrayals of serial murder so frequently traffic in sexualized, not just gendered, violence?

To be clear, I’m not arguing that true crime must be intrinsically unethical; I’m not even trying to engage that particular debate. As someone who has taught classes on representations of serial killers, that would be rather a bold move on my part. But I do want to ask why sexuality and gender can’t be separated from this genre of literature. Why do we not only include the details of these deaths, but linger upon the naked bodies? Why do we insert sexual motives—so much so that for 130 years the canonical 5 were mistakenly labelled prostitutes—when they may not have existed? Why, in From Hell (2001) do the Hughes brothers go so far as to create a love story in their fictionalized portrayal of the Ripper’s crimes?

Theorists of serial killer culture and horror cinema offer some answers. Carol Clover In Men, Women, and Chainsaw: Gender in Modern Horror discussed what she terms “the assaultive gaze” in modern horror as a male gaze, or a phallic gaze. The camera’s gaze penetrates female victims, standing in for both knife and phallus. While to Clover this is the least interesting of the gazes offered in horror films, she acknowledges its presence and power, and we can deduce that it’s difficult to investigate or portray a violent crime without subjecting the victim to penetrating exposure, thereby sexualizing the subject matter. Similarly, in defining “wound culture,” Mark Seltzer argues that serial killers and their murders are just one example of public fascination with spectacles of trauma. And since personal trauma then occupies the public and private spheres simultaneously “serial killing…[is] one of the crucial sites where private desire and public fantasy cross.” As we as consumers seek to probe the wound, we have already crossed one boundary into someone’s private moments; we can see how easy it then becomes for us to cross further boundaries.

So we must be cognizant of our impulses. We can restore dignity to victims of serial killers even as we study the crimes. We can note that sexuality and violence are often (though not always) linked, without eroticizing that violence. We can recognize that, as Clare Smith and Mark Jones (and others) have noted, Jack the Ripper has accidentally stumbled into our collective gothic vocabulary alongside fictional monsters like Dracula. But the Ripper wasn’t Dracula and Polly Nichols, Annie Chapman, Elisabeth Stride, Catherine Eddowes, and Mary Jane Kelly weren’t Mina and Lucy. We shouldn’t turn them into ghost stories, and we definitely shouldn’t use their deaths to re-instill Victorian patriarchal mores. They have been through enough.

Shannon Zellars-Strohl (@ShannonZellarsS) holds graduate degrees in Victorian Literature and Philosophy of Religion from Indiana University and Florida State University, respectively. She has presented her work on literature and film at such conferences as Victorians Institute, North American Victorian Studies Association, and Northeast Modern Language Association, and recently published a co-authored piece on the representation of modern education in “Little Monsters” for Horror Homeroom. She is currently working on articles about portrayals of the Haitian zombie in Victorian literature and Jack the Ripper in contemporary true crime narratives. Zellars-Strohl taught literature, writing, and film classes at Rhode Island School of Design and American University before joining the faculty at University of Maryland in 2018.

Rubenhold, Hallie. The Five: The Untold Lives of the Women Killed by Jack the Ripper. Boston, Houghton Mifflin Harcourt, 2019.