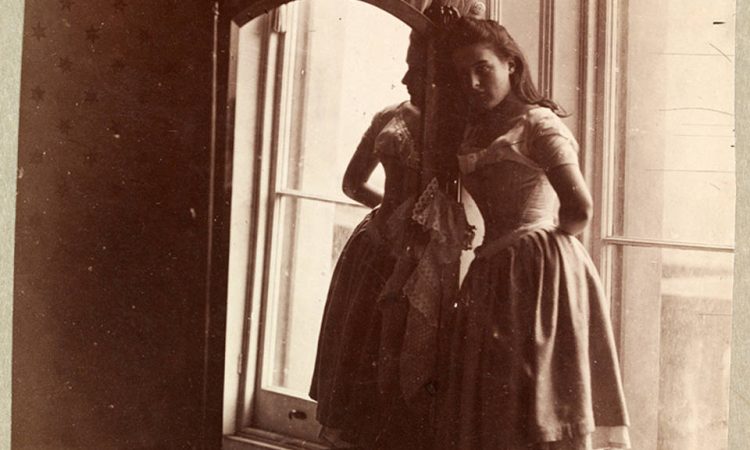 Next to a window with shafts of light providing shadowy illumination into a sparsely furnished room stands an adolescent girl. There is a look of casual awkwardness about her, yet she has an enigmatic stare towards the camera, showing a degree of trust shared between herself, the model and the photographer.  Beyond the window is a blurred view of the city, lost in the power of the intimacy of the dramatic pose struck by this girl, the subject of the composition.

The bold and revolutionary scene transcends time and could be the work of a twenty-first-century fashion photographer, given the touches of modernity that can be detected. Yet, surprisingly, it was created over 150 years ago. The photographer was Lady Clementina Hawarden. The model, one of her daughters. The location, the first floor of their elegant Kensington home, the makeshift studio that Hawarden had set up.

The daughter of Admiral Charles Elphinestone Fleeming and Catalina Paulina Alessandro, Lady Clementina Hawarden became the most pioneering Victorian female photographer during the 1860s, yet very little is actually known about her – she did not keep a diary and few of her letters remain. Most of her biographical details come from her photographs. In 1845, she married Lord Hawarden and remained in London with him, before moving to his family estate, ‘Dumdrum’, Co. Tipperary, in 1857. It is believed that Hawarden began experimenting with photography in Dumdrum, by taking stereoscopic photographs of the landscape.

In 1859, the family moved back to London and here she began to photograph her daughters, first taking stereoscopic pictures before moving to a larger, stand-alone format. Hawarden was a devoted mother – she and her husband had 10 children, 8 of whom survived to adulthood – and her daughters stood as her models.

Hawarden’s career was very short – a mere 7 years, as she died aged only 42, from an acute bout of pneumonia. It is believed that her immune system was severely compromised from her constant exposure to the photographic chemicals. Despite this brevity, Hawarden was a prolific artist, producing over 800 photographs. Her work was admired by many, including Oscar Gustave Rejlander, critic and photographer, who observed that ‘she aimed at elegant and if possible, idealised truth’, and Lewis Carroll.

Hawarden was the first female photographer to receive critical recognition for creating technically perfect prints. She exhibited her work with the Photographic Society of London, in 1863 and 1864, under the titles, ‘Studies from Life’ and ‘Photographic Studies’, and was awarded the Society’s silver medal for both. However, despite this high regard, Hawarden appears not to have printed many images from each negative, nor did she actively sell her work as other photographers did.

Hawarden’s photographs record the life and interests of an upper-class, mid-Victorian family, yet her photographs reveal little of this world. Interestingly, the furniture is removed from the room, creating mis-en-scene and theatrical poses within the first-floor studio of her home. As a woman, she was forced to stay at home to work, unlike her male counterparts who would set off to explore distant, foreign locations with their camera. Despite being confined to her home, Hawarden staked out new parameters of art and photography with her careful choice of props, clothing and use of mirrors; the balcony and her model’s postures and poses. Hawarden’s photographs demonstrate immense technical innovation and she became quite the expert on indoor photography. She was able to create exquisite studies of her daughters, often reminiscent of the pre-Raphaelite artists. The figures and their dress formed the main subject matter of the photographs, situated carefully in the room and often in front of the balcony, with the city beyond providing a blurred background.

Hawarden was obsessed with studying the way that fabric hangs off the female form in her photographs. Her daughters are nearly always dressed in elaborate dresses, with the material draped around their bodies. The photographs focus on the folds of the dresses, the way the fabric catches the light, the reflection of the cloth in the mirror.

In the image above, Hawarden’s daughter, Clementina, adopts a pose that gives the impression of being languorous or thoughtful, even though we know she would have had to hold this pose for several minutes while the plate was exposed. She seems in a kind of pensive dream, with the rest of the world dim and distant behind her. This pose is typical of the stances the models adopted – Victorian maidens taking on the tragic postures of classical heroines. The natural light drenching Clementina channels the high emotion providing the contrast with the shade in the rest of the room.

In the photograph below, Hawarden has situated her daughter before the mirror, which served to provide natural light for the photograph. Hawarden used light with lavishness and ambiguity, to generate the air of theatricality. Her use of natural light was considered pretty daring at the time and she relied on the strong shafts of sunlight in these photographs.

This photograph was actually used by Penguin for the cover of Wilkie Collins’s Woman in White, which is appropriate, as there is an air of loneliness and mystery about it, characteristic of Hawarden’s work. Isabella is positioned before a mirror, which was a favourite prop of Hawarden’s. Mirrors are always mysterious and threatening, suggesting the double and the doppelganger. Once again, this study considers how the fabric drapes over the feminine form.

The mirror is used above, with Clementina’s reflection barely visible. She becomes timeless; you could be looking at a young woman of any time, an air of modernity about the scene. The shadowy light from the mirror creates an atmosphere of mystery: a young woman in a deep reverie. The photograph captures this, communicating the private passions and glimpses of adolescent girls, left to their own devices, and thriving upon it. Either side of the mirror is another world, reminiscent of Lewis Carroll’s Alice through the Looking Glass.

The provocative poses of her daughters are significant, as the Victorians were anxious about the idea of sexuality and adolescence. The photographs raise significant questions of gender, motherhood and sexuality, relating to the photographs’ ‘inherent attachments to loss, duplication, replication, illusion and fetish’.[1]  It has been suggested that it is only due to the fact that the relationship between photographer and model was one of a mother and her daughters that such images could be produced.

Hawarden’s images represent a glimpse into the intimate lives of upper class, young women languidly posing, in carefully styled costumes. Her photographs display her talent as a gifted photographer, and an artist working in a pioneering way, using sophistication and innovative flair.

Jessica Thomas is a student at Chester University on the MA in Nineteenth Century Culture and Literature. Her research interests include Victorian death cultures, technology (such as photography and paper production) and how women of the period interacted with these technologies.