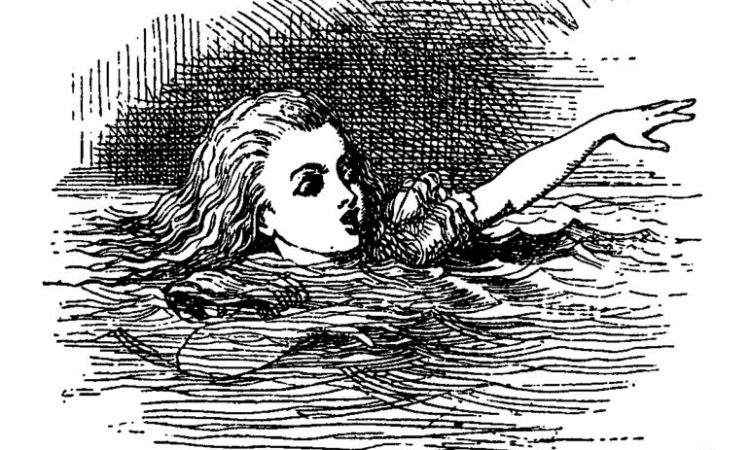 Unlike many other examples of “Golden Age” nineteenth-century children’s literature that promoted morality through allegorical form, Lewis Carroll’s Alice’s Adventures in Wonderland (1865) was without a clear instructional purpose. In this post, I consider two images by Sir John Tenniel (1865) and Salvador Dalí (1969) in order to reinterpret Wonderland’s possibilities through femininity and madness. In the Victorian period, ‘madness’ was a gendered construct associated with ideas of the feminine, such as hysteria.[1] Although Alice is represented as a child in Carroll’s text, feminine expectations of marriage, motherhood and convention await her in adulthood. I suggest that Alice escapes to Wonderland in order to defy these prescriptive roles: she creates an alternative feminine identity in a space which accommodates for madness, creativity and non-normativity. Despite the historical distance between Tenniel and Dalí, their alternative depictions of Alice each communicate ideas about these different themes.

In Figure One, we can perceive a subverted image of the ‘angel in the house’. In the nineteenth century, the ‘angel in the house’ trope referred to an idealistic female figure who was wholly subordinate to patriarchal systems.[2] The reality of this normative construction was more nuanced, however; it was an unrealistic, rather than a practical or achievable, aspiration for women to strive for. The illustration details Alice’s first encounter with the Duchess.[3] In this section of Carroll’s text, Alice is drawn to the Duchess’s home, and she is confronted with an entirely chaotic and unorthodox scene. Bearing this construction of the ‘angel in the house’ in mind, we could suggest that Tenniel’s illustration shows how Alice does not fulfil this ideal in Wonderland. Tenniel draws upon the grotesque through images of the impertinent Cook (who continuously disrespects the Duchess, despite her hierarchal position), the highly caricatured Duchess (as a complete antithesis to the affectionate and doting ‘angel in the house’) and the neglected infant in order to demonstrate how female characters within Wonderland transgress their feminine roles. Household management and maternal duties are disregarded within this alternative realm. Alice exists on the border, while the background (rather than the forefront) of the home is exposed in a scene which encapsulates the inadequacy and undesirability of domesticity. As a result, we can suggest that Wonderland enables women to fulfil alternative, unconventional roles that contrast with those encouraged in Victorian society.

We can further interpret Alice’s divergence from conventional ideas of femininity through Dalí’s surrealist adaptation. Given Dalí’s historical distance from the nineteenth century, he would not have actively engaged with the ‘angel in the house’ trope; yet, similar themes in Alice continue through his work. Figure Two shows the frontispiece for Dalí’s edition of Alice. The image of the skipping girl represents Alice’s character prior to entering Wonderland, an alternative realm of creativity, liberation and madness. This motif of the ‘skipping rope’ is prevalent in other examples of Dalí’s work, namely Figure Three, which shows his ‘Landscape with Girl Skipping Rope’ piece. Alice’s shadow is much darker and more ominous than the playful child who accompanies it. The shadow is minimal, but it can be seen as a fundamental component of her gendered identity. The image at the forefront of Figure Two is more ambiguous, and it is not clear which character it is supposed to represent. However, its position in relation to Alice suggests that Dalí could be incorporating an observer figure: an observer who recognises the possibility of madness and non-normativity. In particular, the observer’s crutch and the flower each do something to communicate ideas about female madness.

The crutch is a key trope in Dalí’s work.[4] Here, we can suggest that it portrays themes of instability, inadequacy and Alice’s need for physical and emotional support. Dalí’s flower image can also be linked to Alice’s madness. As flowers emblematised femininity in the nineteenth century, this symbol could be further linked to the feminisation of madness, given Alice’s proximity to Wonderland.[5] Through these ambiguous images, we could suggest that Dalí’s modernist engagement with Carroll’s text creates a space for Alice’s non-normative femininity. Alice’s madness manifests itself most strongly in Wonderland, an entirely ‘mad’ realm of bizarre tea-parties, anthropomorphic animals and nonsensical language. By escaping to Wonderland, Alice faces a difficult choice: she is able to indulge in creative fantasy as a means of liberation, but she must accept that, by doing so, she inevitably deviates from her expected path of feminine behaviour.

In each illustration, depictions of Alice pose a challenge to normative Victorian femininity, either through her inability to fit with social roles and expectations, or through the possibility of her ‘madness’. The exploratory notes offered in this blog briefly touch upon the different ways in which Alice’s Adventures in Wonderland can be reread in light of femininity and madness. Alternative interpretations of Alice enable Alice’s existence to continue beyond Carroll’s original text and its various adaptations: her character is able to be reinvented and reconfigured in a way which rejuvenates the overall canon of children’s literature.

Hannah Bury (@hannah_bury_) is a PhD candidate at the University of Salford. Her interdisciplinary doctoral project analyses intersectional representations of madness, femininity and disability in Disney film adaptations of nineteenth-century literature. She has recently published a post with the British Association of Victorian Studies Online. You can contact her at h.j.bury@edu.salford.ac.uk.