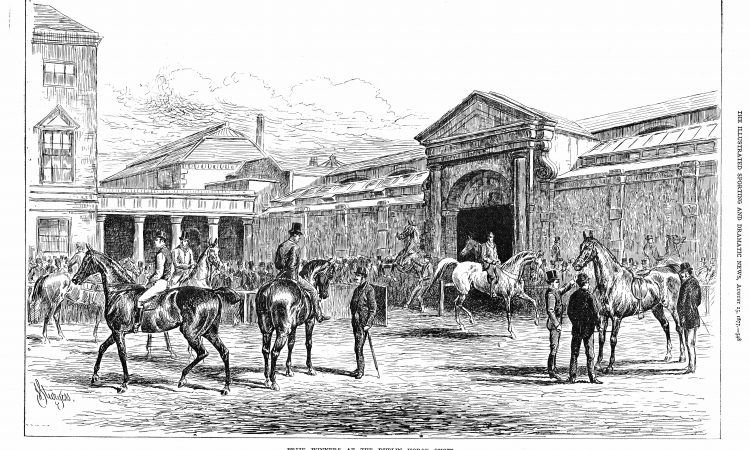 Horse shows, stalwarts of summer rural life, began as a Victorian phenomenon. Materialising in both London and Dublin in 1864 as responses to a sharp decline in the equine population, they coincided with the increasing promotion of leisure as an antidote to the pressures of modern work.[1]  Leisure pursuits were allied to ‘the quickening pulse of commercial enterprise which did much to enlarge and glamourize leisure,’ and horse shows quickly became busy marketplaces catering to pleasure and social ambition.[2] Previously exhibited at agricultural shows, the horses at the Royal Dublin Society Horse Show and London’s Islington Horse Show were largely aimed at a newly profitable leisure market in a world where horses were ubiquitous for both work and pleasure.[3] The large crowds in attendance signified the growing taste for leisure and spectacle that tempted the wealthy and middle classes alike to spend their time and money. The visitors at the first Dublin Horse Show, ‘many of whom were ladies, became so numerous that the show yard and passages throughout the different buildings occupied by the horses became densely crowded.’[4]  The admiration of a good horse became a point of unity in a world where social boundaries were becoming porous as ready cash began to compensate for lack of title or rank, and the middling sort adopted the pleasures of the aristocracy.

Victorian horse shows drew a range of people to compete and attend, combining spectacle, sport, social display, and consumerism wrapped around the horse as an object of desire.

As the mid-Victorian middle classes enjoyed increasing financial and social advantages, horses and horse sport were no longer the exclusive preserve of the wealthy. A well-bred riding mount or a flashy carriage horse became fashionable commodities as the era of conspicuous consumption captured by Veblen began to extend to all aspects of middle-class life. Animals and their pedigrees, particularly dogs and horses, were attainable means of publicly possessing and displaying an appreciation for taste and discernment formerly championed by the gentry.[5] Though the original purpose of horse shows was to improve breeding standards, their efforts were not, in the main, directed to working horses; in Dublin, hunting horses for sport, many descended from well-known racehorses, were by far the most numerous entries in the shows.[6] Throughout the century, hunting on horseback shifted from being an elite sport to one that could be availed of by the middle classes, and the figure of the day-tripping merchant or banker out hunting was frequently satirised.

Leisure riding also became more widely practiced, encouraged by an increasing acceptance of physical activity as healthful and enriching, and a turn on London’s fashionable Rotten Row in Hyde Park was a way of showing one’s style and athleticism.

Islington had numerous competitions for leisure horses, either shown by proud owners, or in prospect of sale to buyers looking for a smart horse.

The daily newspapers conveyed the popularity of horse shows, unfolding the excitement of the show ring. The Field noted in 1867 that the attendance at Islington proved ‘the growing popularity of these exhibitions among the Londoners’ and that ‘the appetite for them is not beginning to pall.’[7] The London illustrated papers drew attention to the spectacle of the undertaking, showing spirited animals being guided by handsome men and women in elegant sporting attire.

The papers also showed the differences in emphasis between London and Dublin; in 1867 the London Daily News noted that the classes for park horses and riding horses were most popular with the public, ‘because it was that in which they felt themselves most competent to take part’ as city dwellers had more experience with urban leisure riding than country sport.[8] In Dublin, hunter classes dictated the tenor of the shows, perhaps a reflection of the city’s proximity to the countryside, and that many Irish breeders and owners were also members of hunt clubs – the papers reported on the entries to these classes in great detail. At both shows, the then-novel element of horses jumping over fences to prove their hunting skills was of colossal interest, their feats a spectacle that everyone wanted to see – at the Dublin horse show in 1868, ‘so eager were the spectators to see what was going on at the “jump” that numbers crowded on benches of a rather rickety character, which broke down with a crash, depositing those standing on them in the mud.’[9]

Aside from the attractions of the horses themselves, shows were also bustling marketplaces. All manner of horses were, of course, for sale, from prize-winning stallions to children’s ponies, sometimes changing hands for eye-watering prices to aspirational buyers. Equestrian leisure pursuits also required fashionable but practical bespoke clothing, instruction in riding, and goods for the horse itself. Trade stands at the shows catered for all needs, often focusing on the latest innovations.

Consumer goods weren’t limited to equestrian interest, but included the latest in domestic conveniences, including sewing and washing machines as well as furniture, toys, textiles, and gardening equipment.

The increasing encouragement of physical activity as beneficial leisure appears at horse shows in the promotion of bicycles and exercise equipment, for sale to an audience with a demonstrable interest in sport.

Other kinds of leisure venues began to attach themselves to ‘Horse Show Week’, as theatres, concert halls, and dining establishments began to advertise special events in the papers aimed at attracting the show crowd to evening entertainments.

Wedged into the busy sporting calendar each summer, horse shows were not simply outlets for the wealthy, or limited to the interests of equestrians. They set their net to capture a wide audience, tempting the general public with the spectacle of jumping, with well-dressed people riding stylish animals, and with shopping for the latest in sporting and household goods as well as equestrian equipment. The archival records for horse shows demonstrate the strengthening ties between the pursuit of leisure and the growth of consumer culture, which became more tightly entwined as the century progressed. Members of any aspirational household would find something to amuse at a horse show, and the growing number of leisure riders would be sure to find the horse of their heart’s desire being shown in the ring.

Dr Sherra Murphy is a lecturer in Critical and Cultural Studies at Dun Laoghaire Institute of Art, Design, and Technology in Dublin. Her work focuses on the cultural history of museums in nineteenth century Dublin, and more recently on the development of horse shows in nineteenth century Ireland. This research was undertaken with the kind support of the Royal Dublin Society Library and Archives.

[6] The catalogues of the Royal Dublin Society Horse Show hold information about competitions, breeding, and owners. They are the most accessible catalogues for nineteenth-century horse shows, and can be found, along with other resources, in the Society’s online digital archive: https://digitalarchive.rds.ie/collections/