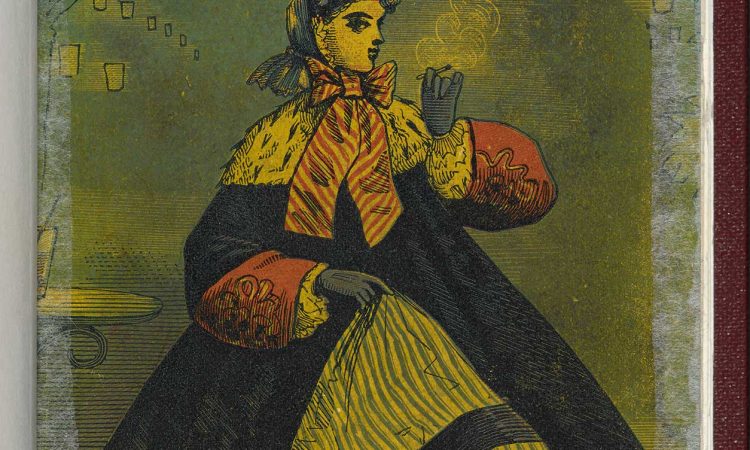 “In cases of mere suspicion, women detectives are more satisfactory than men, for they are less likely to attract attention.”[1]

What detective doesn’t begin with “mere suspicion”? And yet the “petticoated police”, as Mrs Paschal terms herself and her female colleagues in one of the earliest detective stories featuring a female detective, remain outliers in a genre dominated by Sherlock Holmes and his brothers.[2] Even Joseph Kestner’s exploration of early female detectives, Sherlock’s Sisters, is predicated on Holmes as central to the genre. But could we better understand the detective fiction genre if we decentered Sherlock and his particular brand of masculine ratiocination? After all, the thoughts of any “perceiving mind” are predicated on the actions of “an incarnated body”.[3]

The female detective was an active and even exciting figure in the nineteenth-century popular imagination. Many appear, both in fiction and in real life, but, as they appear in brief news snippets, magazines and yellowbacks that are now difficult to come by, there also must have been many more who are currently lost to us.

In real life, they range from the “female detectives” trained and employed in 1855 by former Chief Inspector Charles Frederick Field – the inspiration for Charles Dickens’ Inspector Bucket[4] – through British press coverage of the death of Kate Warne, of the Pinkerton Detective Agency, in 1868,[5] to the fin-de-siècle inquiries of employment advice guru Pandora about the viability of detective work as a career for women.[6]

Their literary companions were just as many and varied, but if we confine ourselves only to those British female ‘professionals’ who earn a living from detecting, the earliest identifiable female detectives appear in 1864: the “Lady Detective,” Mrs Paschal, a creation of the pseudonymous W. S. Hayward; and G, the “Female Detective” of James Redding Ware’s short stories, published under his pseudonym Andrew Forrester Jr.[7] A gap follows in the extant literature, ended by Leonard Merrick’s Miriam Lea, the titular Mr Bazalgette’s Agent (1888), who is followed by Loveday Brooke, of C. L. Pirkis’ stories for the Ludgate Monthly in 1893 and 1894, and Dorcas Dene, of George R. Sims’ story collections of 1897 and 1898. L. T. Meade’s Miss Cusack, who featured in stories between 1899 and 1901, takes us finally into the twentieth century. In the space available, I want to offer just two indicative examples of how we might use this corpus to develop a new sense of the founding principles of the detective fiction genre, based on female bodies detecting body-to-body, using proximity, keen observation and intuition.

Far from being a poor imitation of ratiocination, as it is often treated, intuition is a powerful form of subconscious observation and reasoning, involving recognising, and drawing conclusions from, patterns about bodies. Such subconscious observations manifest as ‘hunches’ or ‘gut feelings,’ somatic metaphors for sensory data being processed by the “incarnated body” in the dark, as it were, before the “perceiving mind” becomes aware in a ‘lightbulb moment’.

Often described under the synonym of “sympathy”,[8] such intuitions relate to the bodily needs of others, in which any detective ought to be an expert. Thus, Paschal simulates “fatigue” and “attention” to insinuate herself into the home of a lonely female caretaker, in so doing satisfying the needs of the woman who describes herself as “a body who’s lonesome” and finds relief, very briefly, in having an engaged interlocutor in her home – while Paschal herself swiftly locates her criminal quarry.[9] Intuition, then, is a function of the “incarnated body” that precedes and dictates any action of the “perceiving mind”. The capacity to make and interpret observations without conscious intellectual labour is an essential qualification for detectival success.

In Forrester’s “The Unknown Weapon,” the main action of the story takes place in and around a house seemingly named for the female detectives who are often referred to metonymically as “petticoats”: Petleighcote. Unsurprisingly, then, the final clue is revealed by the petticoats of the policewoman whom G, the lead detective, has disguised in the household as a maid: “Martha, in passing between me and the box, swept the drapery away with her petticoats, and showed a black corner”.[10] A male body, in male attire, would not have had the same effect, would not have detected the box, and would not have revealed the truth of the crime. Female detectives disguised as servants lift veils, then, literally and metaphorically.

One could analyse the respective roles of Sherlock’s mind and body in Arthur Conan Doyle’s fiction and, indeed, in the adaptations that have come afterwards, from the BBC’s Sherlock to Brittany Cavallaro’s series of young adult fiction featuring Sherlock descendant Charlotte Holmes. But what I hope to have shown here, briefly, is that Sherlock need not be the perpetual reference point when it comes to defining the genre. Instead, we might turn to the “petticoated police” as guiding lights instead.

Dominique Gracia (@graciado) is an Administrative Director of NAVSA’s Central Online Victorian Educator (COVE) project. Her research focuses on Victorian poetry and short fiction, media history, and the reuse, repetition and recurrence of the Victorian in twenty-first-century television. Recent publications consider the ekphrases of Michael Field and Algernon Charles Swinburne (Victorian Poetry) and the utility of Friedrich Kittler’s media history for understanding ekphrastic poetry (Word&Image). This blog is based on an article that will be published in Victorian Popular Fictions shortly, entitled ‘Back to bodies: female detectives and bodily tools and tells in Victorian detective fiction’.

[2] W.S. Hayward, ‘The Mysterious Countess’, Revelations of a Lady Detective (London: The British Library, [1864] 2013), loc. 124. The British Library has done much to make these female detectives available to modern readers, both on paper and in Kindle editions.

[4] The ultimate divorce case of the Evanses is set out in an untitled news piece in the London Daily News [Day] 1857: 4. News articles with headlines such as ‘Clever Arrest by a Female Detective’ (South London Chronicle, 24 April 1869, p.2) or merely ‘A Female Detective’ (Falkirk Herald, 18 October 1877, p.6), were common, as were adverts for private detective agencies highlighting that female detectives were employed there (see, for example, ‘Arthur Cleveland Montagu’, The Times, 2 March 1875, p.1).

[7] Paschal and G are preceded by a penny dreadful that seems to feature the first fictional female sleuth working with the professional police: Ruth the Betrayer; or, The Female Spy (Edward Ellis (Charles H. Ross), ed. Dagni Bredesen (Richmond, VA: Valancourt Books, [1862-3] 2018). As there is more of the rogue spy about her than the professional detective, Ruth is omitted from my summary here.