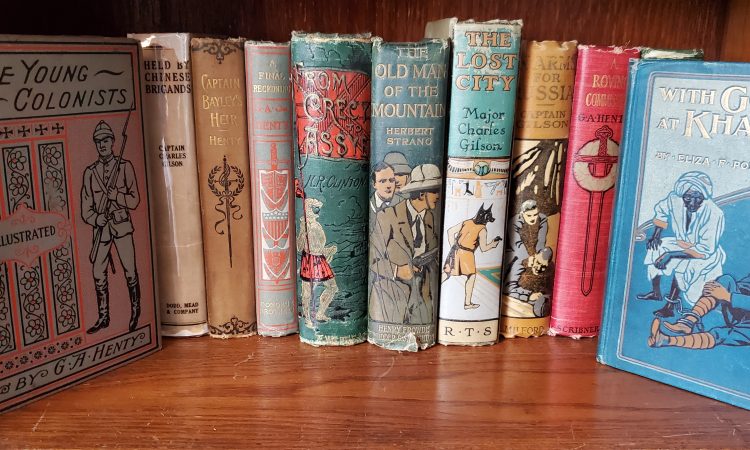 As the British empire encroached ever farther into new territories inhabited by thousands of ethnic groups, Victorians debated the most likely reasons for their own imperialist success. Charles Darwin’s On the Origin of Species (1859) inspired those seeking a scientific explanation, who composed cranial and facial measurement charts positioning distinct “races” in descending order; below the European appeared the Asian, Native American, African, and, lastly, the Australian Aborigine. In my research on Victorian attitudes to race and empire, I find myself turning from the decidedly imperialist adventure tales of H. Rider Haggard and Rudyard Kipling – and the sensation novels partially questioning racial categorisations like The Moonstone (1868) by Wilkie Collins and Mary Elizabeth Braddon’s Phantom Fortune (1883) – to the racial messages appearing at the same time in adventure stories for Anglo-American children.

Recently, I’ve been collecting juvenile adventure stories both for personal research and for use in teaching about how children learned racial perspectives. The dedications inside the front covers bring home the fact that children received these books as special treats, as prizes, as Christmas presents. Such tales of derring-do were believed to furnish character-building morals like courage, enterprise, and loyalty to their country. As future citizens and possible soldiers, boys were encouraged to emulate the brave actions of these British and American heroes; it is sobering to think that some of these previous owners would have been the right age to serve in WWI or WWII. Some particular titles in my collection, such as British war journalist and novelist G. A. Henty’s The Young Colonists: A Story of Life and War in South Africa (1885), A Roving Commission or Through the Black Insurrection at Hayti (1899), and A Final Reckoning: A Tale of Bush Life in Australia (1900), specifically reference nineteenth-century struggles against the likes of African Boer allies, black Haitians, and Aboriginal Australians. Often, the causes of native resistance, such as slavery, are explained away as ungrateful ignorance of the “benefits” experienced under white dominion. Not only does Nat Glover, hero of A Roving Commission, express this belief, but in the preface, Henty himself longs for “a strong white power” to again restore the liberated Haitians from “savage African tribes” to “able-bodied” workers.1 All of these books have colourful jacket designs and illustrations, a marketing strategy showcasing exotic settings. But a strange feature on several spines is the depiction of a menacing European pointing a gun at the evil racial “other” located on the front cover, visible even on the outside of a closed and shelved book. On that of Herbert Strang’s The Old Man of the Mountain (1916), three Englishmen hold the titular Asian tyrant at gunpoint, as he sits in “Oriental’ splendor, claw-like hands resting passively in a green silken robe. By eliminating the foreign threat with modern weapons, European victors reassuringly restore supremacy. Unsurprisingly, these visual messages persist in both the text and illustrations indicating the extent of the “white man’s burden,” as Rudyard Kipling famously termed the cultural act of Christianising and civilising benighted heathen savages. Racist stereotypes abound, as when the graceful Asian villain of Captain Charles Gilson’s Held by Chinese Brigands (1921) glides “across the room as noiselessly and stealthily as a cat” and is addicted to opium (in actuality, a drug forcibly imported by Great Britain into China despite the reactionary attempts of two Anglo-Chinese Wars, from 1839-1842 and 1856-1860).2 Despite his friendship with brilliant Chinese detective and master-of-disguise Mr. Wang in Gilson’s The Lost City (1923), Captain Crouch requires racial others to accept Great Britain’s religion as the only true faith. 3 Foreign characters are often comical figures, as with Sher Jang, the Indian cook and valet in The Old Man of the Mountain, who receives constant mockery from his white master’s friends due to his looks, behaviour, and dialect. 4 But some surprising moments of tolerance do appear in some texts, indicating the importance of judging each author – and book – on their individual merits. In Eliza F. Pollard’s With Gordon at Khartum (1907), Harold Anderson defends Prince Hasan’s Muslim worship, seeing moral value in such steadfast dedication to prayer. However, class and race are powerful influences in their friendship, since the prince is wealthy, a graduate of Oxford University, and a firm supporter of the British cause in Egypt. While Harold initially teases his sisters Doris and Cecily that Hasan is “coal black…and he will roll his eyes at you till you are terrified,” Hasan’s actual “complexion is similar to a European’s, but more opaque…whiteness…inherited from his Georgian mother.” 5

Nowadays, most of these works are only available as early editions through antique booksellers or online retailers like Abe Books; however, due to Henty’s more enduring appeal, his series was reissued as a complete set of 99 novels and 2 books of short stories in 2002. As described by the publisher, Henty is “a very careful student” of history, who helps the reader learn “about people and customs in all strata of the societies involved.” 6 In my opinion, it would be a mistake to ignore or destroy these books, which can tell us so much about the influence of other literary genres like sensation novels and mysteries on children’s fiction and the near-pervasion of social Darwinism in Britain’s age of empire. At the same time, I worry that viewing these fictional works nostalgically or using them as historical sources, rather than as 150-year-old literary productions advocating white dominance, risks repeating a dangerous historical cycle. After all, children are still reading them.

[1] G.A. Henty, A Roving Commission or Through the Black Insurrection at Hayti. Illustrated by William Rainey. Charles Scribner’s Sons, 1899. Reprint 1904, p. 169 and “Preface.”