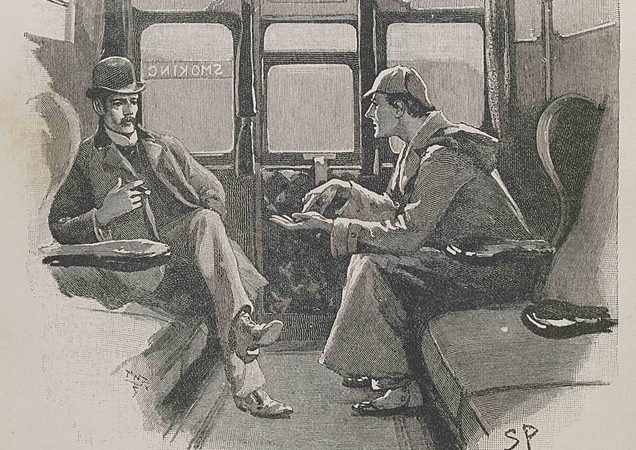 Sherlock Holmes to Dr John Watson, ‘The Adventure of the Blue Carbuncle’

Policing remains, today, a highly contested activity of the state.[2] It has professionalised—and bureaucratised—a great deal since its nineteenth-century inception, but it remains plagued by a fundamental anxiety that the police, not Lady Justice, are blind. This post explores the underlying mistrust of the professional police that flows from Conan Doyle’s Sherlock stories through to the detective stories being written and broadcast right now, telling us something about how we still reckon with one Victorian invention—the police force—using another—Sherlock.

It’s easy to spot a Sherlock. They possess some powerful combination of misanthropy, laser-focus and insight, and they tend to give the law-enforcement system short shrift. And these days there are many of them: ’Real’ Sherlocks, via Robert Downey Jr, Benedict Cumberbatch, and Johnny Lee Miller; Reimagined Sherlocks in contemporary characters like Gregory House M.D. (House M.D.) or Detective Saga Norén (The Bridge); and fresh Period Sherlocks like Dr Laszlo Kreizler (The Alienist) and Dr Max Liebermann (Vienna Blood).

Sherlocks are such successful stock figures that, ironically, they dull our own powers of perception. They are the flash, eye-catching legacy of Conan Doyle’s story-telling, concealing the darker subtext of that legacy: a professional law-enforcement system that is flawed, dull, and not to be trusted to get to the truth.

In this sub-genre, extraordinary individuals like forger and art thief Neal Caffrey (White Collar) or ex-pretend-psychic Patrick Jane (The Mentalist) take on police work for various tenuous reasons: a deal to get out of prison (Caffrey), a personal vendetta against a Moriarty (Jane), or the thrill of more active work (as for spy-turned-criminal-psychologist Dr Dylan Reinhart, Instinct). Whatever the circumstances, the reason that they are taken on by the “official police” is clear: criminal-justice professionals can’t even trust themselves to crack the tough cases.[3]

A Sherlock often “shows up officialdom”, reflected in absurd or caricatured professionals who are “an obstacle to the truth”.[4] But the extraordinary sidekick sub-genre extends this sort of mistrust of criminal-justice professionals to even the best and most competent. While Holmes might “us[e him]self up rather too freely” in pursuit of Moriarty,[5] the extraordinary sidekick is pulled along and “put … out there” by their professional partner to help solve cases they alone cannot.[6]

Extraordinary sidekicks thus offer an odd melding of the characteristics of both Sherlock and Watson: genius detective, but acting only with a lead partner who provides their sole point of access to detective work. This both boosts and undermines the professional partner responsible for deploying them in the field. While detective fiction is “invest[ed] in the notion that the common and the trivial can be mastered—or be made to make sense—if only the proper methods are used”, the extraordinary sidekick highlights that the “proper methods” may not be those of institutionalised police forces.[7] The extraordinary sidekick sub-genre thus turns us away from an image of institutional authority and trustworthiness and towards an interpersonal faith in law enforcement. The reciprocal relationship of trust or faith between the professional and the extraordinary sidekick they deploy becomes the only way to plug the justifiable trust gap.

Dominique Gracia (@graciado) is an Administrative Director of NAVSA’s Central Online Victorian Educator (COVE) project. Her research focuses on Victorian poetry and short fiction, media history, and the reuse, repetition and recurrence of the Victorian in twenty-first-century television. Recent publications consider the utility of Friedrich Kittler’s media history for understanding ekphrastic poetry, and the relationships between aesthetics, ethics and friendship in NBC series Hannibal. Her current projects focus on the legacy of Arthur Conan Doyle’s Sherlock Holmes stories for twenty-first-century fictional sidekicks, and on Dante Gabriel Rossetti’s adaptations of poetry for painting and vice versa.

[3] The phrase “official police” is used variously in the Holmes stories, as in ‘The Adventure of the Red-Headed League’, The Adventures of Sherlock Holmes, pp. 29-56 (48).

[6] As Dr Alana Bloom says of Will Graham when cautioning Special Agent Jack Crawford that Will’s involvement in fieldwork would be damaging to him (‘Apéritif’, Hannibal (NBC, 2013-2015), S1E1).