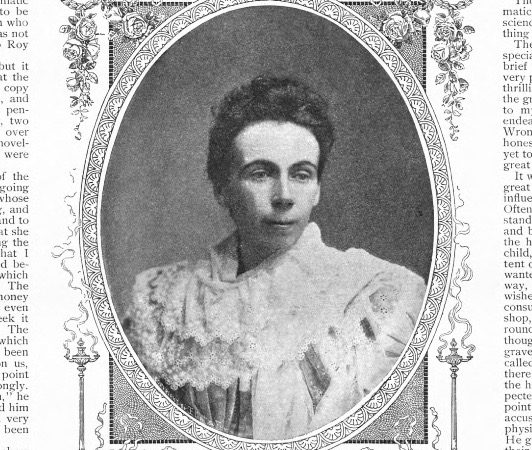 Sympathy sold well in the late-nineteenth-century literary marketplace. When the novel We Two (1884) by Edna Lyall (pseudonym of Ada Ellen Bayly, 1857–1903) became an overnight sensation, Lyall cut a figure that was ready-made to slip into the role of sympathy spokesperson. Her career became a sympathetic enterprise in more than one sense. Not only did she write sensitively to ease myriad anxieties crowding the minds and lives of lower-middle-class readers; she also aspired to instill in readers a habitual sympathetic response to difference in others.

Ada Ellen Bayly was born on 25 March 1857 in Brighton. Named Ada after the heroine of Bleak House, Lyall lost her father when she was eleven and her mother when she was fourteen.[1] Her family was well-rooted in Anglicanism, while remaining broad-minded in its Christian faith. One of Lyall’s biographers, J.M. Escreet, describes her childhood home as ‘a liberal, comprehensive atmosphere of thought’ wherein the family was ‘taught to see good in all forms of religion’.[2]

We Two was Lyall’s third novel. Before this, her works Won by Waiting (1879) and Donovan (1882) had received scant attention, with Donovan initially selling a meager 320 copies. Although Lyall had sent the edition to William Gladstone (he described it as ‘a very delicate and refined work of art’), it was not until the positive reception of We Two that readers turned to Donovan in large numbers.[3]

Both Donovan and We Two advocate religious tolerance, particularly in response to secularism. Donovan is an atheist presented sympathetically to readers, while in We Two the ‘we two’ father-and-daughter duo, Luke and Erica Raeburn, is based upon Lyall’s imaginative interpretation of the relationship between the secularist Charles Bradlaugh and his daughter. Bradlaugh was the co-editor of the secularist newspaper the National Reformer from 1860 to 1890, and he became the President of the London Secular Society in 1858, later co-founding the National Secular Society in 1866. He worked closely with other prominent secularists, such as Annie Besant (1847–1933), and regularly published secularist pamphlets under his pseudonym ‘Iconoclast’. A Punch cartoon from 1881 features a caricature of him as a devilish creature with bat wings, bringing pestilence to Northampton as he sweeps over a cityscape wearing a top hat fashioned from his ‘PAMPHLET[S]’.[4] Bradlaugh was elected as the Liberal MP for Northampton in 1880 but was unable to take his official seat in Parliament until 1886 due to a lengthy battle over the Parliamentary Oath of Allegiance. He had initially requested to ‘affirm’ his allegiance to the Crown without swearing the Oath, since it included the religious clause ‘So help me God’. When a Select Committee made it clear that he could not affirm in lieu of taking the Oath, he agreed to take it in ‘the spirit which the affirmation would have conveyed’, but was repeatedly prevented from doing so through Parliamentary motions set against it.[5] After one such motion, the House instructed Bradlaugh to withdraw without taking the Oath and, when he refused, he was forcibly removed to be temporarily imprisoned in the Clock Tower.

Bradlaugh’s Parliamentary career received heavy press coverage and, like so many, Lyall followed it in the papers with keen feeling. This inspired her to use her novels to facilitate specific feelings of sympathy, indignation, and compassion on Bradlaugh’s behalf.

A line in the Daily News […] suggested to her mind the story of ‘We Two’, with its two principal characters. It was an account of the late Mr. Bradlaugh’s imprisonment in the Clock tower, which finished with the words, ‘Mr. Bradlaugh has telegraphed for his daughter’. ‘I pictured to myself the devotion of his daughter at such a crisis in his stormy life, and thought of the strength and support it must have given to him’.[6]

Following her surge in popularity, Lyall easily conformed to the expectations of publishers who ‘positively encouraged topical fiction’ and wished to make the most of a literary marketplace fueled by writers’ willingness to be opinionated.[7] Philip J. Waller, for instance, looks to ‘the advent of the journalistic interview’ in the popular press in the late nineteenth century, which ‘made more demands on authors, profiling them as public persons and encouraging them to ventilate their concerns on public issues’.[8] Just such an interview with Lyall was published in The Windsor Magazine in 1895, complete with images of her home in Eastbourne, the interior of her study, childhood photographs, and a full-length portrait filling an entire page.[9] Her portrait is prominently placed and embellished in many similar pieces in women’s magazines, for example in her article on ‘My Early Literary Influences’ in The Ladies’ Home Journal.[10] In this article, Lyall stresses the important early influence of a nurse ‘whose sympathies were wide and far-reaching’ and of her parents’ ‘wise guidance and loving sympathy’.[11] She portrays her early leanings toward becoming a novelist through examples of her sympathetic imagination at work. As a child, she would consider what the lives of the ordinary people she met might be like. Via newspaper reports of Lyall’s periodic illnesses (her constitution is often described as ‘fragile’), readers were encouraged to mimic Lyall’s example by extending sympathetic feelings of concern to the author.

A run-down of a selection of Lyall’s titles shows how well-suited both Lyall’s moral outlook and the literary marketplace were to opinionated pieces on prominent social and political issues: Donovan and We Two address secularism and Christian bigotry; Knight-Errant (1887) portrays professional singers, often maligned, in a positive light; Doreen (1894) supports Irish Home Rule and exposes unjust treatment of the Irish at the hands of the English; The Autobiography of a Truth (1896) garners sympathetic attention to the Armenian Crisis (1894–96) in Anatolia; A Hardy Norseman (1899) strongly supports Norwegian nationalism, questions capitalist enterprises, and addresses anxieties related to population increase; and, finally, The Hinderers (1902) concentrates on the Boer War and denounces ‘jingoism’ as something other than ‘true patriotism’.

Everything Lyall wrote had a sympathetic twist. Her texts are expressions of her religious and political sympathies, but they also functioned as philanthropic acts. Usually, each publication was the means to a more concrete and practical end. She regularly used the proceeds from her novels to give back to local and foreign communities. After Donovan, she used her earnings to give three bells to St. Saviour’s Church in Eastbourne.[12] Her provocative novella The Autobiography of a Truth was composed to fund-raise for the Armenian Relief Fund.

Lyall worked hard to cultivate a public image that placed her sympathetic nature at its heart. And it stuck. Interviewers, family members, and biographers promoted this image throughout her career. Together, they produced a commercially successful portrait that was well-preserved posthumously. The 1895 publication of the ‘Illustrated Interview with Edna Lyall’ called Lyall ‘kindliness and tenderness personified; full of sympathy and cheery encouragement, and ever ready to give practical help and advice’.[13] Lyall’s obituary notices also upheld this image, one calling her ‘an apostle of tolerance for all opinions conscientiously held’ who ‘hated hypocrisy in its manifold guises’.[14]

J.M. Escreet’s biography, published the year after Lyall’s death, is consistent with Lyall’s presentation in the literary marketplace as compassionate, fair, and ever sympathetic to the downtrodden. Escreet renders Lyall from her earliest years as a person in a constant state of sympathy with others. According to Escreet – in an account bordering the absurd – Lyall never resented childhood trials; she regarded all suffering as the ‘learning of a language, to enable her to understand others’.[15] As a little girl in school, Lyall reportedly refused to compare paintings by two girls, saying, ‘Comparisons are odious’, while one cousin claimed, ‘She always took up the side of any one who seemed to her oppressed or ill-treated, whether their ill-treatment was deserved or not’.[16]

Undoubtedly, Lyall was a caring individual, and her strongly marketed identity made her a veritable icon of sympathetic feeling and action for lower-middle-class readers. But, as we will see in Part II, a look at Lyall’s private correspondence with Charles Bradlaugh’s daughter, Mrs. Hypatia Bradlaugh Bonner, exposes the limitations of her brand of sympathy.

Sarah Barnette (@drsarahbarnette) earned her M.Litt in Romantic and Victorian Studies at the University of St. Andrews in 2011 and completed her D.Phil in English Literature at the University of Oxford at the end of 2017. Her interest in Victorian literary ethics and methods of engagement with difference led to her dissertation, ‘Many-sided Sympathy & the Science of Religion in George Eliot, Vernon Lee, & Edna Lyall’. Sarah has written about the Brontes, George Eliot, Goethe, Max Muller, Vernon Lee, Walter Pater, E.B. Tylor, and others. She pursues both academic writing and creative nonfiction, and currently works as a Professional Writing Tutor at Villanova University’s Writing Center in the United States.

Read Part 2 of ‘An Introduction to Novelist Edna Lyall’ here.